O’balin, son of Blorn, is an eager young dwarf and a native to the mysterious Mountain Realm. Having been a treasure hunter for most of his life, O’balin is overjoyed when he hears that the king of the Mountain Realm is offering a vast reward to the one who finds The Lost Treasure of Undur, a long-lost treasure that has been missing for generations.

Despite warnings from his neurotic brother and others around his home, O’balin is unable to pass up such a grand opportunity and thus gathers a handful of his family and friends to accompany him on the journey of a lifetime. Along the way O’balin and his comrades experience grand adventures, incredible battles, fun and laughs, sacrifice, and even loss in the first to come in a series of epic tales by Author J. Edwards Holt. 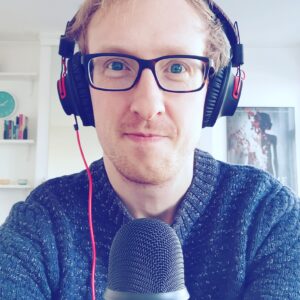 Simon Maeder is a UK based voice actor with a professional grade home recording set up. He also has links to London studios if you prefer. He produces his own young adult fantasy podcast called ‘Benlunar’ which he writes and records on his home set up. He has a warm and enthusiastic voice and enjoys bringing life to characters with a variety of tones and accents.