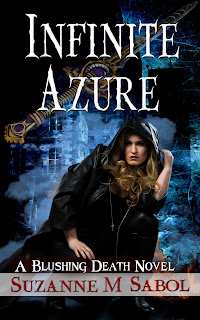 Fighting enemies on all fronts, The Blushing Death must convince humanity that vampires and werewolves aren’t the monsters they’ve always feared. But destroying her enemies and protecting her people may be harder than she realizes with all of humanity watching and their secret out in the open.

The supernatural world has come out to humanity with a bang!

All the precious planning Patrick and Dean have worked toward and all the connections they have developed are worthless. When the Master Vampire of North America decides to remind humanity of their place on the food chain, the city and its people will pay the price. The battle for the North American vampire colonies has begun in earnest and only a single vampire can be at the top.

Dahlia is waging a battle on a different front. Baba Yaga is making moves in Faerie to regain her power in both the human world and Faerie, creating chaos and leaving carnage in her wake. Faced with new crises and old enemies, Dahlia will need to balance her responsibilities to her people and her city with the creatures in the Outer Realm.

But Baba Yaga has used the darkest magic to tie The Blushing Death to her and the ramifications could be deadly. Can Dahlia build an army to defeat Baba Yaga? Can she overcome her own fears to become the power she needs to be?

“It’s fucking cold out here,” I hissed through chattering teeth. No matter how much I willed my jaw to remain motionless, it didn’t listen and the rattling inside my head was driving me insane.

The fire flickered in the pitch-darkness of the Outer Realm, casting an eerie glow across the snow. Beyond the miniscule light of the fire, as large as we dared make it here so we didn’t attract other and more dangerous beings, inky blackness stretched on forever. The oppressive nature of the dark night and the fact that I knew it could literally stretch out for eternity, was some cruel realization that I was infinitesimal in an expansive place with creatures that would eat me for the hell of it.

Shaking off my descent into bat-shit-crazy, I considered the first time I’d been here and each subsequent journey back. Each time I crossed the veil into the Outer Realm, it got just a bit colder, the air bitter and chilled. This time there was a light dusting of snow on the ground with flurries brushing against my exposed skin. I’d dressed for cold, knowing full well how the wind had burned through my clothes the last time. But this was worse. The wind was piercing and sharp as it howled through the trees and my layers.

Beyond the minimal warmth and light of the fire lurked beasties and creatures of every shape and size, and the focus of their eyes on me was a weight I felt in my gut, a tight clench of fear that made me queasy, alert, and on edge. I fought the urge to run, knowing that I couldn’t outrun any of them. I could fight but I would lose. The Outer Ream was a place where strength was valued, and weakness was devoured. Maybe they were just curious. Maybe they were hungry. I had no choice but to wait and hope they remained in the dark beyond the light of our fire.

“Make the fire warmer,” Adrik snorted, landing on my shoulder and rubbing his hands together, holding them out before the inadequate flames. The four-inch-high pixie stood close to my neck, soaking up my body heat. He knew I could use my magic to increase the heat of the fire, and I’d considered it, but I didn’t want to give too much away too soon. Bargaining with the fae was a delicate balance of knowledge and cunning. Negotiating from a position of strength was better but I wouldn’t lay all my cards on the table just yet.

“I don’t want to burn my eyebrows off,” I said, smirking at the pixie. He rolled his small silver eyes at my obvious lie. “When are they going to get here?” I asked, wanting desperately to be home and warm in my bed. The longer I stayed in the Outer Realm, the bigger the likelihood that someone would notice either on this side or my side of the veil that I was not where I was supposed to be.

Adrik and I had been making small trips to the Outer Realm for weeks without letting anyone know. I was pushing my luck before either Patrick or Dean noticed and gave me hell, at the very least a lecture. After the mountain where I’d killed Rokap but lost Milagra and Konstantin, Dean and Patrick had been different.
More protective. More confining. More everything. Dean especially. If they knew what I was doing, Dean would lose his shit. Right now, this was better. He didn’t worry and I didn’t have to deal with his anger. I was being a coward but right now, I was willing to be a coward to keep them safe just a bit longer.

“The representative should be here momentarily,” Adrik responded.

“You’d think I’d figure out how to dress properly to be here, but it always seems colder than the last time,” I said, unable to keep my teeth from chattering. The fleece lining wasn’t enough.

“It is not your imagination,” Adrik answered, his voice rough through the already guttural accent. His English was much better, but I could still hear the centuries of Russian in the shape of his words.

1. Tell us a little about how this story first came to be.
Infinite Azure is the 9th book in The Blushing Death series, following Dahlia Sabin and her search for acceptance, love, and companionship among the paranormal. The first book started with the idea of a character and what her life would be like if she didn’t know who and what she was but was thrown into this world and forced to defend herself. Pool of Crimson is the first book in this series, and it introduces Dahlia Sabin and the world she is thrust into.

2. What, if anything, did you learn when writing the book?
I always learn a little about the folklore I’m researching for each book. Diving into cultures and beliefs can be both frustrating, frightening, and fun.
3. What surprised you the most in writing it?
I always strive for between 90K to 105K words. This one surprised me by ending around 115K words.
4. If it’s not a spoiler, what does the title mean?
All the titles in The Blushing Death series include a color in their title that holds something pivotal or something important to the overall plot/arc. Azure is in reference to the magic and the source of the magic in this book.
5. Were any of the characters inspired by real people? If so, do they know?
The lead vampire is based loosely on my husband, at least in appearance that is. I tend to pick and choose traits, mannerisms, or features from people I know, friends, or relatives.
6. Do you consider the book to have a lesson or moral?
Not so much a lesson, but themes. I like to make a point of driving home the idea of self-acceptance. I also like to gray-up the division between good and evil to make sure that characters have both hero and villain in them.
7. What is your favorite part of the book?
I think one of the hardest but also the most fun for me was to take my over-arching villain over the majority of the books in this series and create that gray area where someone could look at the events and question if they would do the same.
8. Which character was most challenging to create? Why?
The most challenging was the flip side of that, to take characters that you thought were good and shift the perspective to muddy those waters.
9. What are your immediate future plans?
I’m working on a new fantasy series and the final installment of the Blood and Bone Legacy, in addition to having a full-time job and being a full-time parent to my seven-year-old daughter.

Suzanne M Sabol is the author of Urban Fantasy and Paranormal Romance. She is a graduate of The Ohio State University and has two Bachelor of Arts degrees with majors in Criminology, International Studies, Russian, and Political Science. She has a Master’s degree from The Ohio State University’s John Glenn School of Public Affairs. She is married with one child and lives in Columbus Ohio.
The Blushing Death Series and the Blood and Bone Legacy are published through Soul Mate Publishing. Editor, Debby Gilbert, can be contacted through their website at www.soulmatepublishing.com.
Website
Twitter
Instagram
Pinterest
Facebook 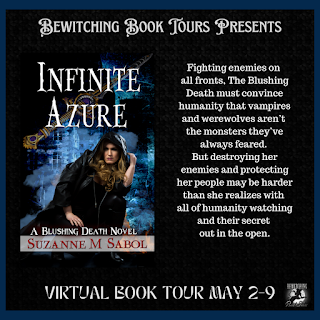