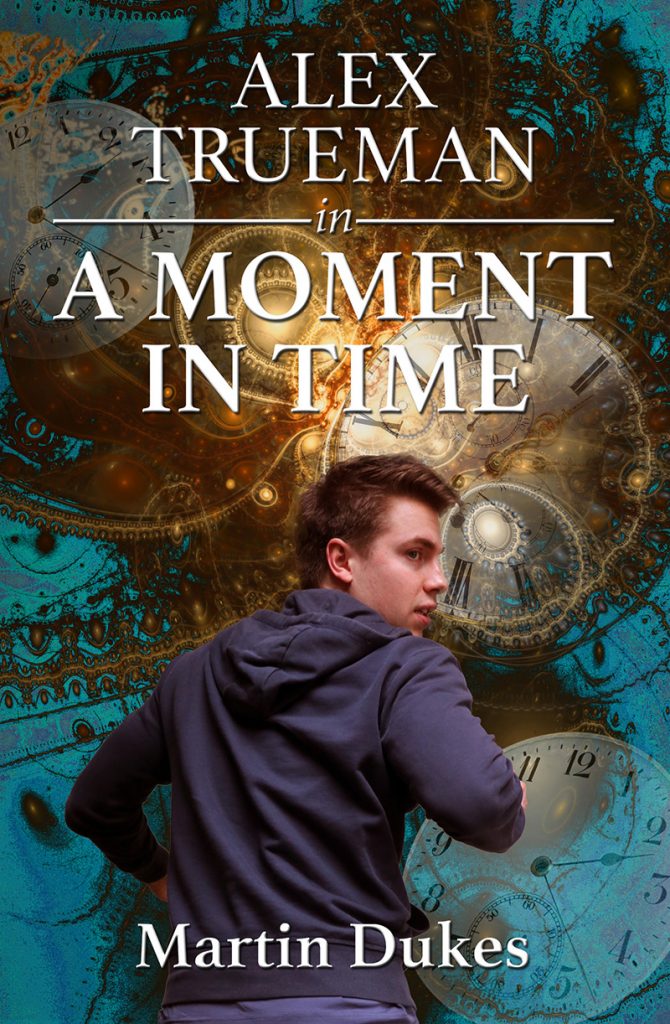 A Moment In Time
by Martin Dukes
Genre: YA Fantasy

Alex Trueman has just turned fifteen. He’s a typical teenager, a bit spotty, a bit nerdy and he’s not exactly popular at school, not being one of the ‘cool’ kids. His tendency to day-dream doesn’t exactly help him to be cool. either! But being cool isn’t as good as the talent Alex discovers he has – stopping time.

Well, for everyone except Alex, that is, who finds that whilst everyone else is caught in a moment in time, he is able to carry on as normal. Maybe not quite ‘normal’, after all, he’s able to stop time, and whilst that’s not exactly as good as a certain ‘boy wizard’, it’s pretty close!
The only trouble is that reality for Alex isn’t always what is seems, and being plunged into an alternative can be a bit tricky, not to mention the fact that he makes an enemy almost as soon as he arrives, which tends to cause a problem.

Will Alex Trueman, nerdy daydreamer, be able to return to reality or will he be stuck forever in his alternative? Is a moment in time enough for Alex to discover the superhero he needs is probably himself?

A Moment in Time is the debut novel of author Martin Dukes, and is the first in a series of Alex Trueman Chronicles, which take the reader, along with Alex, into a bedazzling world of time travel, alternative reality and flying sea creatures. His further adventures include the past, possibly the future and definitely a fight to save reality itself.

Seen up close, Cactus Jack was a rather scruffy middle-aged man wearing torn jeans and the famous T-shirt by which he was known. He had close cropped hair and about a week’s worth of greying stubble. Cactus Jack was nothing out of the ordinary to look at except in one respect. Morlock and Minion had eyes like sparrows. Cactus Jack had no eyes at all. Where there should have been eyes there were simply expanses of smooth skin. Morlock raised a hand in vague greeting as Cactus Jack strode past. There was no hesitation in his pace, and he showed no sign of having even noticed Alex’s existence. This was fine by Alex. He felt the iron grip on his heart relax as Jack splashed heedlessly through the river and followed David into the scrap yard. Alex had a feeling David would soon be coming back. The scrap yard was surrounded by a high, chain link fence on its further side, and the gate was locked. Sure enough, David tumbled out of bushes into the river a little way downstream. Moments later he was back with Alex, clutching his ribs, his legs torn by thorns and barbed wire. It was clear he was exhausted. Alex wondered how far David had already run with Cactus Jack in pursuit.

“Got… to… hide,” he gasped, his eyes darting about madly until they fastened upon Alex’s skip. This he clambered into, even as Jack reappeared between a stack of gas cylinders and a pile of broken wooden pallets. It was no use. David was doomed.

I wrote this story because I’m a bit of a sucker for ‘what if?’ scenarios. I’ve always enjoyed sci-fi and fantasy books for that reason. Freed from the constraints of the ‘real’ world, as we know it, a writer has complete freedom to create and test characters in circumstances that are far removed from those we may face in our ordinary lives. ‘It is on the wilder shores of human experience that the human spirit rises to its full stature’. I also set out to write something wholly original, something that has never been imagined or written about before. You might think, given five thousand years of human literacy, that this was an ambitious target to set myself. I believe I succeeded, but this may simply be a reflection of my ignorance. Others with a wider knowledge of literature than mine may disagree, in which case, I look forward to being corrected.

When writing this book, I learned that I didn’t need to over-plan it. Initially, I thought I needed to have every scene set in order, every plot twist and turn, thoroughly worked out in advance. I learned, through experience, that this detailed structure soon fell by the wayside. Once I had begun, the story took charge, and soon began to chart its own course, often at variance with what I had originally planned. It was a strange and startling discovery to find that the story flowed out of me, almost of its own accord, once the initial imaginative groundwork was laid and the first few thousand words were upon the page.

I found that it was impossible to start ‘cold’. By this I mean that in order to start a new day’s writing, it was necessary to begin by reading through yesterday’s output. I don’t mean just a paragraph. I mean at least a thousand words. This provided me with the platform to begin anew, having first immersed myself once more within the story and within the style adopted. I haven’t spoken to many other writers, but I imagine this a very common experience and a way of working that many will adopt. However, as this was my first complete novel, this was something of a surprise to me.

It relates to the single moment of time (at 2:23pm on a Saturday afternoon) that Alex Trueman becomes trapped in, having accidentally daydreamed himself into the strange time-frozen world of Intersticia.

Have you ever wished you could step into your fifteen-year old self and re-live that part of your life? Whatever challenges came your way then, you could probably deal with so much better now with all that lived experience to draw on. In a way, Alex Trueman reflects my imaginary response to how I might have dealt with my own school days if I had access to some rather handy superpowers! In that sense, I guess there’s a self-portrait element in there. Everyone else is pretty much made up!

I think the book makes the point that nothing worth having comes for free, although I don’t think it’s at all didactic in putting that across. Alex Trueman finds that he has acquired some amazing powers. He also finds that those powers bring with them some quite troubling downsides, ones that he needs to come to terms with during the course of the story.

My favourite part of the book is the last chapter, where all the threads come together and where there is a frantic race against time to save an imperiled life and to make good an escape from this world.

Ganymede, a rather menacing and oppressive figurewas one of the more difficult characters to create. He has his own complex back story (to be revealed in further episodes in this series) and deals very harshly with the inhabitants of Intersticia. He is also able to rationalize his conduct through a shrewd understanding of human nature, although a devious self-interest underlies all.

I have written a further three Alex Trueman books, which I hope to see published in due course, and have another in the process of planning. I have also written two fantasy novels, which may come to light in the future. One of them is on something of a dark theme, with elements of resurrection, set in an imaginary interpretation of 18th Century Britain. The second is set in my imaginary continent of Toxandria, a world I invented many years ago and represented in a detailed painted map. Only in the last few months have I finally explored the history and culture of this place, writing a novel that is the first of four to be set there.

I’ve always been a writer. It’s not a choice. It’s a compulsion, and I’ve been writing as long as I can remember. Lots of childish scribbles in notebooks, lots of rejection slips from publishers and agents testify to a craft long in the making. In addition, it has proved necessary to earn a living by other means whilst those vital skills mature. For thirty-eight years I taught Art and Graphic Design, thirty-seven of them in a wonderful independent girls’ school in Birmingham, UK. For much of the latter part of this career I was Head of Department, which gave me the opportunity to place my own stamp on Art education there, sharing with the pupils there my own love of Art and the History of Art. Over a decade I was able to lead annual visits to Florence, Venice and Rome (some of my favourite places on the planet) as destinations on my Renaissance Tour. These visits created memories that I shall cherish for the rest of my life.

I love history in general, reading history as much as I read fiction. I have a particular interest in the ancient world but I am also fascinated with medieval times and with European history in general. This interest informs my own writing to the extent that human relationships and motivations are a constant throughout the millennia, and there is scarcely a story that could be conceived of that has not already played itself out in some historical context. There is much to learn from observing and understanding such things, much that can be usefully applied to my own work.

Teaching tends to be a rather time-consuming activity. Since retiring, I have been able to devote much more of my time to writing, and being taken on by the brilliant Jane Murray of Provoco Publishing has meant that I am finally able to bring my work to the reading public’s attention. I like to think that my ideas are original and that they do not readily fall into existing tropes and categories.

I am not a particularly physical being. I was always terrible at sport and have rather poor physical coordination (as though my body were organised by a committee rather than a single guiding intelligence!). I tend to treat my body as a conveyance for my head, which is where I really dwell. My writing typically derives from dreams. There is a sweet spot between sleeping and waking which is where my ideas originate. I always develop my stories there. When I am writing it feels as though the content of my dreams becomes real through the agency of my fingers on the keyboard. I love the English language, the rich majesty of its vocabulary and its rhythmic possibilities. My arrival at this stage could hardly be describes as precocious. However, at the age of sixty-two, I feel that I have arrived at a place where I can create work of value that others may appreciate and enjoy.

10 Replies to “Spotlight, Excerpt & Author Interview: In a Moment In Time + Giveaway”