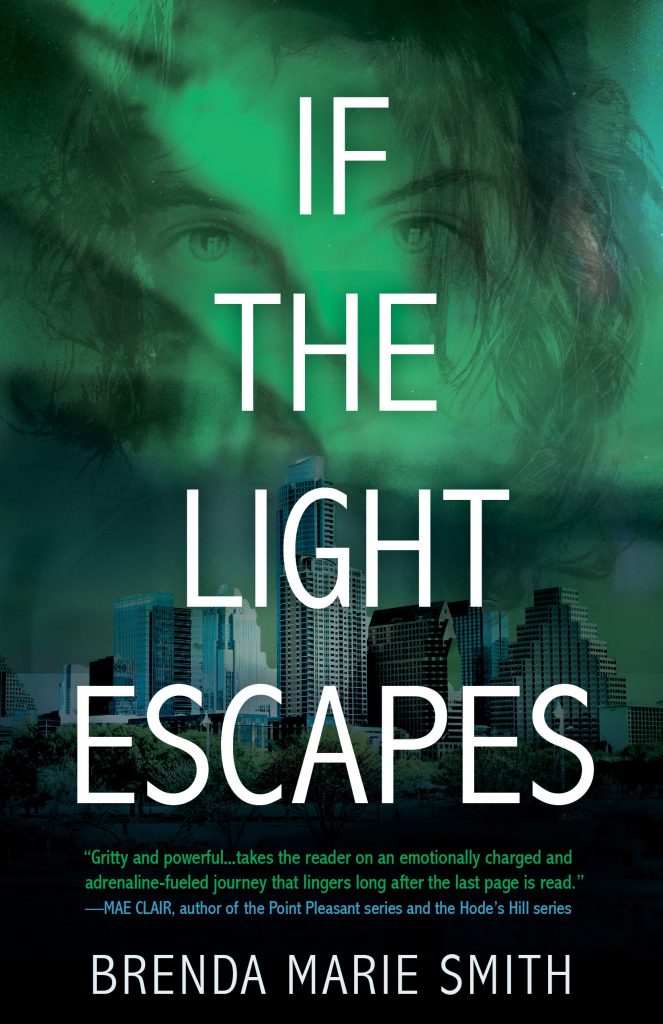 If the Light Escapes
A Braving the Light Novel
A standalone sequel to If Darkness Takes Us
by Brenda Marie Smith
Genre: Sci-fi, Science Fiction (post-apocalyptic)

A solar electromagnetic pulse fried the U.S. grid. Now northern lights are in Texas—3,000 miles farther south than where they belong. The universe won’t stop screwing with 18-year-old Keno Simms. All that’s left for him and his broken family is farming their Austin subdivision, trying to eke out a living on poor soil in the scorching heat.

Keno’s one solace is his love for Alma, who has her own secret sorrows. When he gets her pregnant, he vows to keep her alive no matter what. Yet armed marauders and nature itself collude against him, forcing him to make choices that rip at his conscience. If the Light Escapes is post-apocalyptic science fiction set in a near-future reality, a coming-of-age story told in the voice of a heroic teen who’s forced into manhood too soon.

A huge sliver of moon rises to the east, lighting up the park and Alma’s face with an orange-yellow glow. We pull ourselves up and sit wrapped together on top of the monkey bars like we rule the planet, gazing into our dark subdivision, on the southern edge of our emptied-out city, in the middle of the scary*** world.

The crickets and tree frogs have gone silent. I hear Bobby cock his rifle thirty yards away. …Alma and I gape at each other, and then we run.

When we reach Bobby in the street… I scan the trees behind the swings and monkey bars, half a football field away.

Before the sun zapped us, those trees would’ve seemed pretty. Tonight, they’re creepy. I’ve been too worked up about Tasha and Mom to even think about watching the tree line. As bad as things sometimes get around here, I’m still not totally used to life post-apocalypse and the never-ending vigilance.

I shudder and run my eyes back and forth among the trees. With all the different-sized trunks in the deep shadows, people could be hiding in there and blending in.

“There!” Bobby hisses, pointing to the north edge of the trees. And I see—what?… Two pairs of feet… Then …metal flashes in the moonlight. Behind me, Alma gasps. I pull my Glock, flick off the safety, and aim.

Brenda Marie Smith lived off the grid for many years in a farming collective where her sons were delivered by midwives. She’s been a community activist, managed student housing co-ops, produced concerts to raise money for causes, done massive quantities of bookkeeping, and raised a small herd of teenage boys.

Brenda is attracted to stories where everyday characters transcend their limitations to find their inner heroism. She and her husband reside in a grid-connected, solar-powered home in South Austin, Texas. They have more grown kids and grandkids than they can count.

6 Replies to “Spotlight & Excerpt: If the Light Escapes + Giveaway”