A novice fairy godmother falls in love with Prince Charming. What could possibly go wrong?

AVIANA WILLOWBROOK has no idea that her mother is a living legend until the day the tattered old copy of “The Fairy Godmother’s Rulebook” arrives in the mail on her twenty-first birthday. Estranged from her mom, and living in Beverly Hills with her father, her stepmother and two super-achieving stepsisters, Aviana is unhappy and directionless.

Hotel heir and tech billionaire, NASH NOLAN doesn’t know Aviana exists until the day she transforms into a fairy godmother. The chick with the phobia about being pecked to death by a pack of winged creatures suddenly has a pair of unruly wings of her own to deal with. As if that isn’t enough, Aviana’s first assignment is to spark a romance between her wicked stepsister and the tall and handsome tech billionaire who’s been her crush forever.

Will Aviana use her powers to help her wicked stepsister find happiness, or will she use her pixie dust to make sure Nash is destined to be hers? 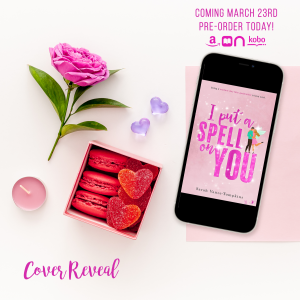 One Reply to “Cover Reveal: I Put a Spell On You, by Sarah Vance-Tompkins”