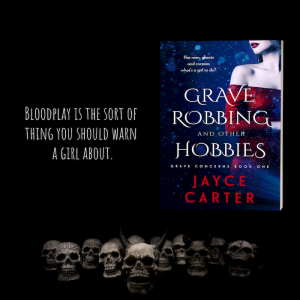 Hunter didn’t remove his hand from my mouth. It made me realize he was also entirely pressed against me, and despite it not being possible, he felt better than he’d looked. His skin was warm, even through my robe.

He took his hand off my mouth but didn’t move away. “Stay still,” he whispered against my ear.

“No. I just really like looking down your robe.”

As soon as his words sank in, when I moved past the adrenaline and the purr of his voice, I realized that yes, my robe had bagged open and he had a perfect view down the front.

I elbowed him, but he didn’t seem to even feel it. He released me, though the way he did it implied my little move hadn’t meant a thing.

“I am so tired of people breaking into my house,” I said.

“You aren’t human, and you don’t have any wards. That’s the same as a ‘come on in’ sign in our world.”

“Sure, shadow-girl.” He sent me a conspiratorial wink, as if we were on the joke together.

“No, I actually am. No funky teeth, no freaky eyes. Human.” I pointed at my face as though that drove the point home.

He waved at himself. “No funky teeth, no freaky eyes. Very much not human. Sure, though, if you want to pretend, I’m not one to turn down a bit of good roleplay. You want to be innocent Little Red Riding Hood? I’ll play the wolf.”

His suggestion derailed me. How could it not? Any girl who claimed she hadn’t had entirely inappropriate dreams about the wolf in that story was a damned liar. Once I’d reached a certain age, ‘all the better to eat you with’ had taken on a very different meaning.

I pictured a dark, heavily wooded forest as I ran, something on my heels, gaining ground. His warm breath on my neck when he caught me…

Suddenly I didn’t care what he’d said, why he was there or what exactly he meant by him ‘not being human’.

Until I recalled he’d broken in, and clearly him showing up at my office wasn’t a coincidence.

He snorted. “I liked where your mind was going before.”

“What are you doing here? And what was that thing?”

“Don’t we have better things to discuss? Or we can do away with talking all together.”

“I don’t sleep with people who might kill me, but thanks.”

“If someone might not kill you, are they even worth sleeping with in the first place?”