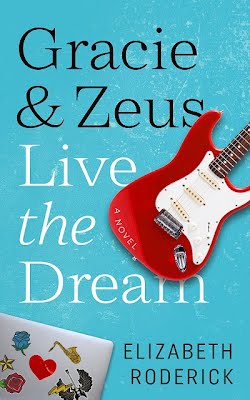 Grace Morgan has been on the music scene long enough to know the life of sex, drugs & rock & roll is just a dream. But after a messy divorce, Grace wants to give her dream of being a music journalist one last shot.

She moves to LA with her 21-year-old foster son, Zeus. They live in a motel on cup noodles and hope, until Grace finally gets a break: a story about Inez Carter, hot-mess frontwoman of the popular band Karma Korn.

The story delivers more sex, drugs and rock & roll than Grace bargained for. Karma Korn’s drummer, Nelson, has Grace rethinking her post-divorce vow of celibacy. And after they’re invited to an elite Hollywood rave, where they mistakenly drink the electric Kool-Aid, Zeus is scouted to be the lead guitarist for another star band.

However, the story soon goes sideways, and things aren’t adding up. Someone is spreading rumors about Grace, trying to sabotage her career and reputation. Then someone tries to kill her. Grace is left frantically trying to connect the dots in the dwindling hope she’ll be able to salvage the story, her relationship with Nelson, and her life.

Grace Morgan was fast asleep, dreaming her ex-husband’s testicles were caught in his bicycle chain.

He stood on the corner of a busy intersection, tugging at his anatomy with a consternated expression, but they wouldn’t budge. Eventually, he gave up and trudged down the damp sidewalk, his spandex shorts wrapped around his ankles, his nut sack stretching out like silly putty as he dragged his bicycle behind him.

A cell phone’s buzzing jangled the pleasant tableau, and it slipped away. Grace sighed, rolled over, and peeled her eyelids open.

“Ohmygod!” She flinched from the staring, golden-hazel eyes of her adult foster son, Zeus.

“It’s your phone, Gracie,” Zeus said. His face was scant inches from hers as her phone continued to buzz against her pressboard nightstand.

Grace struggled to get air into her uncooperative lungs. “What the hell are you doing, Zeus?”

He gazed at her unblinkingly. “It’s your phone.”

Grace sat up, blinking blearily at the walls of the please-don’t-tell motel.

“Don’t answer it,” Zeus said. “They just want to talk about the Mayan Calendar, but it’s a hoax. It’s not always May.”

Grace shoved Zeus out of the way and pawed through the cups of congealed noodles and shreds of candy wrappers on the nightstand. Zeus scooted over to stay in her line of sight, his gaze unwavering, his pupils gigantic. “I’m all out of Adderall, Gracie.”

Grace cursed. “Seriously? It was supposed to last until Monday.” “Maybe you should ask that Mayan on the phone if they have more.”

She finally found her phone and cursed again when she saw the number on the screen. Lawrence Shaupin, the commissioning editor for High Note Magazine. She hit the answer button. “Hello?”

Zeus fiddled with something at the end of the guitar: he was plugging in a cord. Nicole jumped as a pop and squeal of feedback blasted from her speakers. Somehow, Zeus had found a way to patch the Gibson into the stereo system. He had a knack for figuring stuff like that out.

He started to play.

The mass exodus stopped, and people turned to watch. His fingers crawled across the fretboard, filling the room with noise. Somehow, with one instrument, he managed to make as much music as Beatbot had with all her samples and beats and gadgetry.

At first, it was beautiful noise chaos, but a rhythm grew out of it, and a melody, the song enveloping Grace and holding her transfixed. People started screaming again, but now they were cheering Zeus on. A lot of them resumed dancing. The pink-haired boy, who could only be Nicholson, the son of the owners of this place, was still staring up at Zeus, but the look of fury had been replaced by one of disbelief.

Zeus crafted an impossibly good song out of nothing as he swung back and forth on his knees, making the chandelier sway. His song’s hook was completely nonderivative, and perfect enough to make Grace’s scalp tingle. The chord progression was complex, so clever that it made Grace bust up in giggles, but he made it sound simple and natural. It wasn’t until Zeus caught her eye again and broke out in a wide grin that she realized she was smiling like a maniac.

He pursed his lips at her in an exaggerated rock-n-roll face and played the final chords, letting them squeal. As they died away, the crowd broke out in cheers, stomping for more.

ELIZABETH RODERICK is the author of Love and Money, Hoodlum Army, and The Other Place Series, and Gracie & Zeus Live The Dream, as well as many short stories in various anthologies.

She and her daughter help run a small, diversified farm in Eastern Washington. She is a musician and songwriter, and has played in many bands—mostly guitar, bass and keyboards.

Elizabeth’s stories are about love, death, gang warfare, and madness, with characters of the type that society generally shuns: addicts, convicts, and the neurodivergent. She is a neurodivergent person and a disability rights activist.

Elizabeth believes if people get to know those who live on the fringes of society, both in stories and in real life, they’ll find them more likeable than they originally thought.