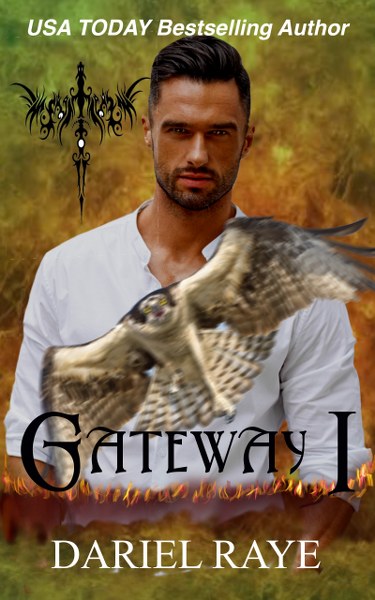 Every predator has a weakness.

When an ancient being, the last of his kind, meets a fiery woman sought by evil, neither one of them is prepared for the consequences.

Gateway is a shape-shifting demon hunter who finds, protects, and prepares the Chosen – human females with the ability to redeem or destroy demons. For centuries, he has followed the rules…

Until he meets his newest charge – curvy, fiery, headstrong, and angry with the world. Following the rules while fending-off demons is going to take everything he has and then some.

*Please Note – “Gateway” contains explicit love scenes, profanity, and violence. Must be 18+ Part of this story was previously published in the “A Darker Shade of Evil” anthology under the title, “The Devil Upstairs.”

Honestly, I just didn’t care about the symbols anymore. I even stopped worrying about the fact that no one else no seemed to see them besides me. After a few more minutes in his arms, I wasn’t thinking about much of anything besides Gateway and the way he felt against me. I had come here to lose myself and that’s exactly what I planned to do…all night in fact, if the opportunity presented itself.
I slid my arms over his shoulders and clasped my fingers behind his neck. His hands were heavenly, applying just the right amount of pressure in just the right places as he moved me effortlessly and skillfully on the dance floor. Our bodies melding together, those dark eyes boring into me until my gaze shifted from sheer intimidation. This was one hunk of man I was holding, but something was definitely…different about him.
Taking a deep breath, I swallowed and gazed into those dark eyes. That rugged face could have been plucked right out of my most frequent fantasy. With so many questions, I still wasn’t sure exactly what to ask next, but I decided to move forward with the obvious, “You say you own the place, but I haven’t seen you here before.” I watched him intently again, hoping for more information this time.
Gateway just smiled, a maddening curve of his perfectly shaped, delectably full lips.
Well, it wasn’t really a question, I told myself, excusing his lack of response.
“I haven’t owned the club for long, but I have seen you before. What brings you here tonight?”
Yeah, now that was a real question, only it was coming from him.
“Let’s just say I needed an escape, Mr. Gateway.”
“Just Gateway.”
“Katrina. My friends call me Kat.” It had finally dawned on me to introduce myself.
“I know. Nice to meet you, Kat. I’m sure we’ll be fast friends very soon.”
I stopped moving and everyone else seemed to disappear, leaving the two of us in a premature yet intimate embrace. “How do you know my name already?” I didn’t bother to balk at his arrogance since he would have had to be blind to miss the fact that I was almost drooling over him. In fact, I was seriously tempted to do something else I had never done before.
His smile evaporated, eyes smoldering.
I could have sworn I saw fire in those depths.
He gave me the strangest answer, “I have my ways, but I only use them when I’m in need.”
Before I could start trying to wrap my mind around that, Gateway tilted his head to the side, tiny lines between his brows as he leaned forward and kissed the top of my ear.
A thrill went through me and I nearly lost it on the dance floor. My ears had always been extremely sensitive— erogenous zones for sure. I shivered, his gesture zinging straight to my core like firecrackers bursting into the black, wide-open sky.
The resident butterflies were set in motion, all aflutter and I didn’t even have the presence of mind to wonder how the hell he knew about my ears. Same way he knew about my name, maybe?
As if the tender, unexpected kiss wasn’t enough, he whispered to me, “Can you honestly be so unaware of your power?”
I was so busy swooning over his warm breath tickling the fine, microscopic hair follicles in my “fuck me now” earlobes that I nearly missed what he said…nearly.
“Power?” What power? I couldn’t even keep a job. 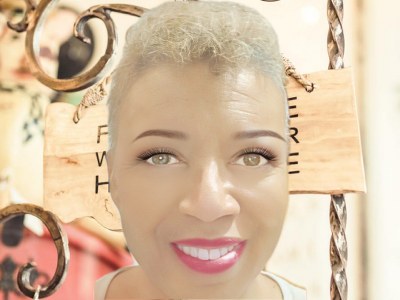 Dariel Raye is an animal lover, animal rights activist, musician, and USA Today bestselling, award-winning author of powerful paranormal romance and dark urban fantasy with IR/MC (Interracial/Multi-cultural) alpha male heroes to die for, and strong heroines with hearts worth winning. She fell in love with books and started reciting stories at the age of 3. A counseling psychologist, classically trained vocalist, and pianist, she plays over 11 musical instruments, and naturally incorporates behavioral psychology into her characters. Her stories tell of shifters, vamps, angels, demons, and fey (the Vodouin variety). She is also a mom, art tinkerer, and Netflix and Amazon Prime paranormal TV series binger.

Book Lover’s Swag Pack (US only),