Welcome to the 3rd exciting instalment in the Birth of the Fae series, From the Ashes by Danielle M. Orsino. Read on for more details and a chance to win a fantastic giveaway!

Queen Aurora and King Jarvok are finding that there is a thin line between love, hate, and Oblivion.

The two Courts were both upholding their respective duties as written by the Treaty of Bodhicitta, until Queen Mary the first of England reneges on a Changeling contract with the Court of Light. This unfortunate act puts events in motion which led to the last Fire Drake, Bishop Awynn, making the ultimate sacrifice. Awynn loses his light while saving The Dark Fae King during a tense standoff with Queen Aurora.

Queen Aurora swears revenge upon Mary for Awynn’s death and issues the same warning she gave her Father, King Henry the Eighth, so many years ago. However, King Jarvok had his own point of view on Queen Aurora’s vengeance and pays Aurora a visit to deliver his critique of her technique, leading to a knock-down drag-out fight between the two Fae monarchs.

Both Leaders refuse to bow even if it means certain Oblivion…

Available on Amazon, Barnes & Noble, and at the Bookshop.org

“Please . I have seen horrors that would make a Troll’s balls shrivel . I have put together war strategies which brought Lucifer to his knees . I am sure I can figure out how to aura blend,” he finally said with a nonchalant hand wave .
Zion rolled his eyes . “My liege, I will ask permission to take certain liberties now .”
Jarvok looked up through his brows at his lieutenant and gave a subtle tilt of his head .
Zion took it as permission . “You are the best of us on the battlefield . I am going to give you a lesson in aura blending, in a way both of us can be comfortable with .” Zion motioned to Jarvok to take a seat . Instead, Jarvok leaned on the wall, arms folded . By humoring Zion, Jarvok was admitting he might have a point . Zion glanced up, gathering his thoughts and fortitude .
The sapphire-eyed Fae faced Jarvok, a smile creeping across his lips . “I’ve got it . First of all, do not unsheathe your sword too quickly . “ 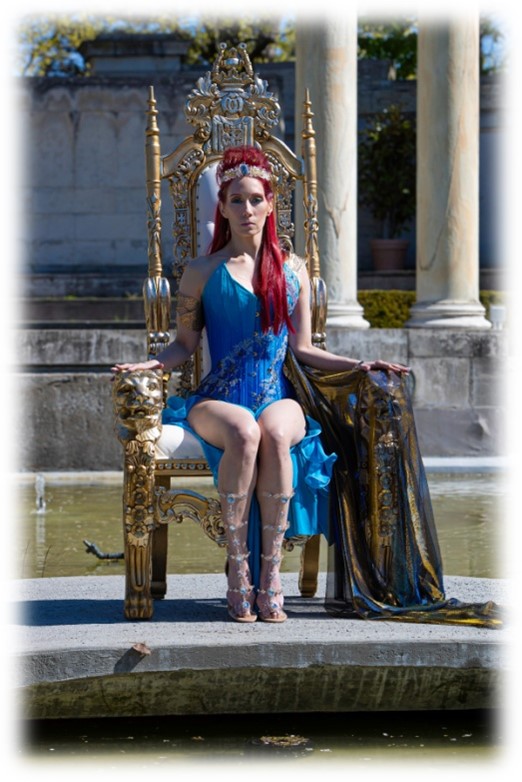 Danielle M. Orsino is a fantasy novelist whose lifelong vision to create whimsical realms that her readers can escape to. Her compelling word-weaving pays homage to a multitude of personal muses, from Chris Claremont and George Pérez (both famous comic book writers), to Anne Rice and Wonder Woman.

The creative spark of storytelling has been with Danielle ever since she was a child, but martial arts and her nursing career took center stage into adulthood. Then, on a day like any other, it was reignited during the most unexpected of moments: while treating one of her patients. Seeing that they longed for a distraction during their arduous treatments, the floodgates of inspiration soon burst forth. So, Danielle took it upon herself to tell them a story; a fantastical narrative that would leave the confines of that IV room’s walls and land upon a page. Before she knew it, what started as an imaginative tale to pass the time, turned into book, followed by an entire series: The Birth of Fae. This awe-inspiring series includes Locked out of Heaven (Book One), Thine Eyes of Mercy (Book Two), and From The Ashes (Book Three), all of which are published by 4 Horsemen Publications, Inc. And with an unwavering passion for cosplay and comics, it was a unanimous decision to place her on the cover of each book in all her Fae cosplay glory. The Birth of Fae also features Los, an affable chameleon dragon inspired by her fun-loving Yorkie named Carlos.

When writing wasn’t at the forefront of her mind, Danielle was a successful Martial Artist. Some of her achievements include “1999 World Martial Arts Hall of Fame Inductee”, “Female Martial Artist of the Year”, “WKA World Champion Silver Medalist 2008”, and numerous more. She has also garnered hundreds of martial art tournament wins, various other national and world titles, and features on big-name channels like TLC and CBS. She even had the rare opportunity to perform for former U.S. President Bill Clinton and collaborate alongside Vincent Lyn and Dwayne “The Rock” Johnson. From there, she pursued her Bachelor’s degree in Kinesiology and Exercise Science, and she is now a Licensed Practical Nurse who focuses on Lyme disease research.

This “New Queen of the Fae’s” unmatched world-building and masterful Fae-origin retellings have led to an ever-growing queendom of “Fae-natics”. To begin embarking upon a quest in an epic world unlike any other, visit Danielle M. Orsino’s official website at http://www.BirthOfTheFae.com. You can also connect with her on Instagram (@BirthOfTheFae_Novel) and Twitter (@BirthOfTheFae).

“After summoning this world into existence through an imaginative force of will, Danielle has scoured every inch of the landscape several times over. Critics often praise a story’s world building by saying that it feels “lived in.” Well, the world of the Fae certainly seems like that because Danielle herself has happily lived there for years as she worked to put all of this together… My favorite part of this story is that it is gloriously depicted in vibrant images.”

-Clete Barrett Smith, New York Times Bestselling Author of If We Were Giants, Aliens on Vacation series, and Magic Delivery