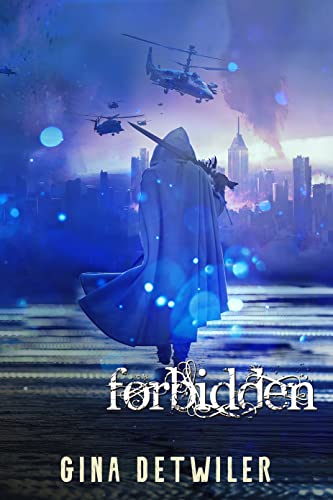 YA Supernatural, YA Fantasy, YA Christian Fantasy

After thousands of years imprisoned in the Abyss, the fallen angels known as the Watchers are on the loose. Jared Lorn and Grace Fortune have also escaped from prison, but all they want to do is get home to their family.

Dark forces conspire against them, and soon they find themselves on a
perilous journey to the Other Side, the spiritual realm.

They must battle the Watcher Samyaza and his cohorts to escape, not knowing that the leader of the Watchers, Azazel, has taken control of the real world and subjugated all nations to his will. Soon they must join the few that are left standing against this worldwide evil, those that have not given in, known as the Forbidden.

Other Books in the Forlorn Series 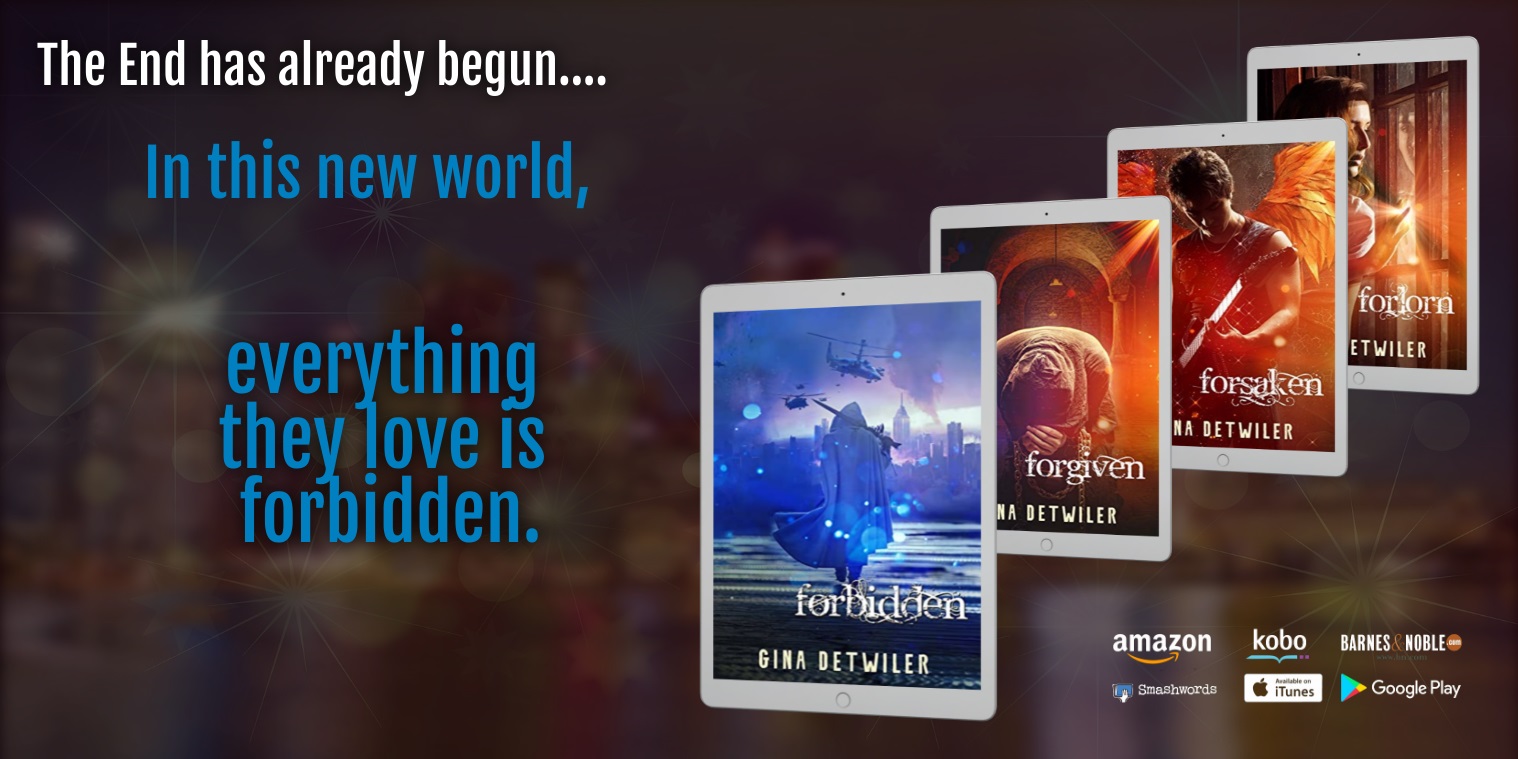 Bad luck seems to follow Grace Fortune wherever she goes. She was orphaned at a young age, and her musical talent got her accepted to a prestigious school for the arts, where she was caught in the middle of horrific school shooting that nearly takes her life.

He was forsaken but not forgotten.

Jared Lorn’s secret is about to be unleashed. 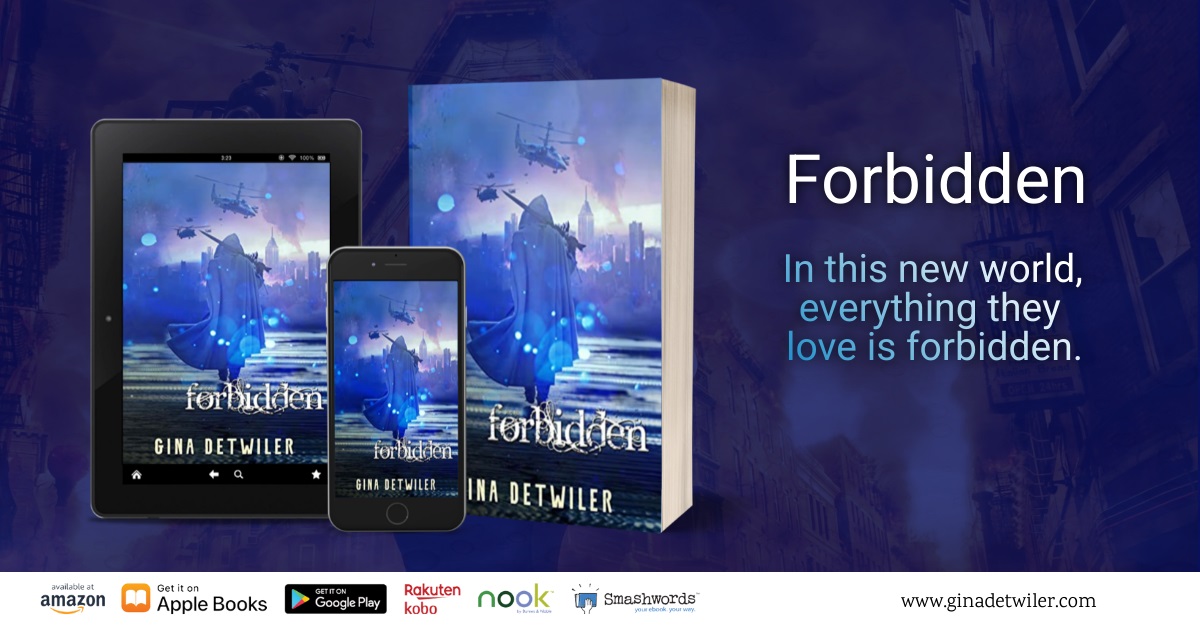 I woke up this morning a prisoner in a castle tower.

I managed to escape through a stone shaft that might have been a medieval toilet. I searched the whole castle until I found him, my husband Jared, chained up in an actual dungeon—seriously—dying from gunshot wounds that weren’t healing.

I thought Jared was going to die in my arms. But then I sang, and he started to heal.

And then Rael, who’s a Nephilim and looks like a giant man-lizard, got loose and broke a hole in the castle wall, and we escaped, crossed a lake, in which I almost drowned, and ran up a mountain before the whole world blew up.

Well, that’s the gist of it. Am I going too fast?

At the moment, I am lying on the rocky patch of ground under a tree, trying to breathe through the gurgling in my lungs as the earth trembles violently under me. It’s louder than a crashing plane, louder than anything I can even imagine. Metaphors fail me. I’m pretty sure the world is about to end any second now.

Something blocks the sun shining in my eyes. Rael. All nine feet of reptilian humanoid. Despite the scaly, greenish skin and a skull sloped like the hood of a Volkswagen, he’s got a very beautiful, very human face which always freaks me out a little. His muscular shoulders and sides are covered in ugly stumps where Darwin Speer’s scientists did their grisly work, amputating the graceful tentacles that once adorned his body like angel wings. One of his hands is missing—he chewed it off to get free of his chains.

Rael saved my life, but right now I’m pretty sure he wants to end it.
He leans over me, his mouth falling open to reveal sharp white teeth, electric blue eyes boring into mine, his breath heavy on my neck. I try to scramble away from him, but a stabbing pain catches me in my ribs. I cry out as he reaches toward me with his one good hand, and I notice the perfection of his long, elegant fingers—six of them—thin and pointed like talons. A low growl escapes his throat—he is more purely animal after the torture he has endured.

The finger is almost upon my cheek when it freezes in midair. Jared pushes the giant arm away, wet hair pale as snow falling into crystal blue eyes. In some bizarre way, they look alike, these two. The black hoodie of Jared’s captivity hangs off him in ragged strips, revealing the puckered skin of healing wounds on his stomach and shoulder.

Rael, to my surprise, obeys. Jared kneels beside me. “You okay?”

“My ribs. I can hardly breathe. What’s happening? Was that an earthquake?”

The collider. The machine in Geneva—Darwin Speer’s Big Bang machine.

“What does that mean, blew?”

“I saw the explosion.”

“I think most of the blast went underground. Besides, it’s pretty far away. But that doesn’t mean we’re out of danger. Can you walk?”

I try to move, but the pain takes my breath away. “Can you…do anything?”

He takes a slow breath and lays his hands gently against my ribcage. Lightning flickers under his skin. His hands grow very warm—I gasp at the burning sensation. He pulls away. I breathe deep.

I take another full breath for good measure. I nod.
“Thanks.” 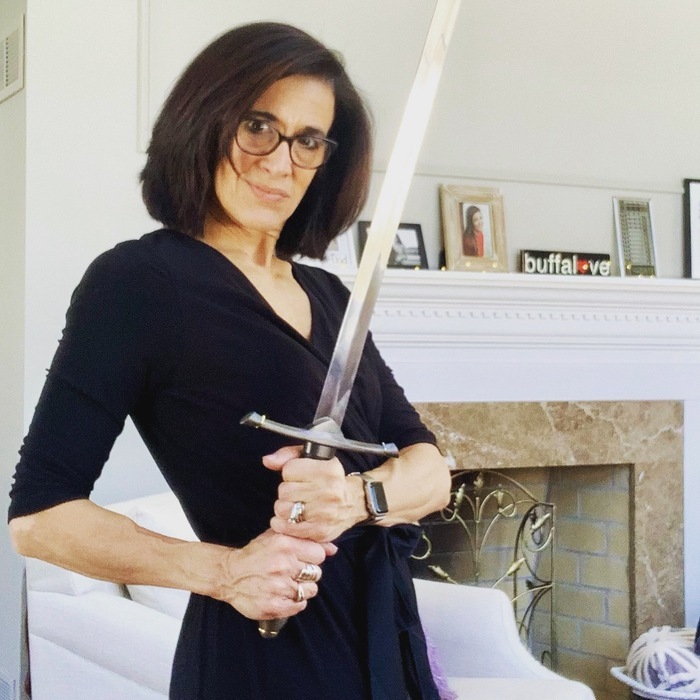 Gina Detwiler was going to be a teacher but then switched to writing so she didn’t have to get up so early in the morning. She is the author of the YA Supernatural series FORLORN as well as co-author with Priscilla Shirer of the bestselling middle grade fantasy series THE PRINCE WARRIORS. She also wrote the ULTIMATE BIBLE CHARACTER GUIDE for Lifeway. She lives in Bucks County, Pennsylvania.

One Reply to “Book Blitz & Excerpt: Forbidden, by Gina Detwiler”