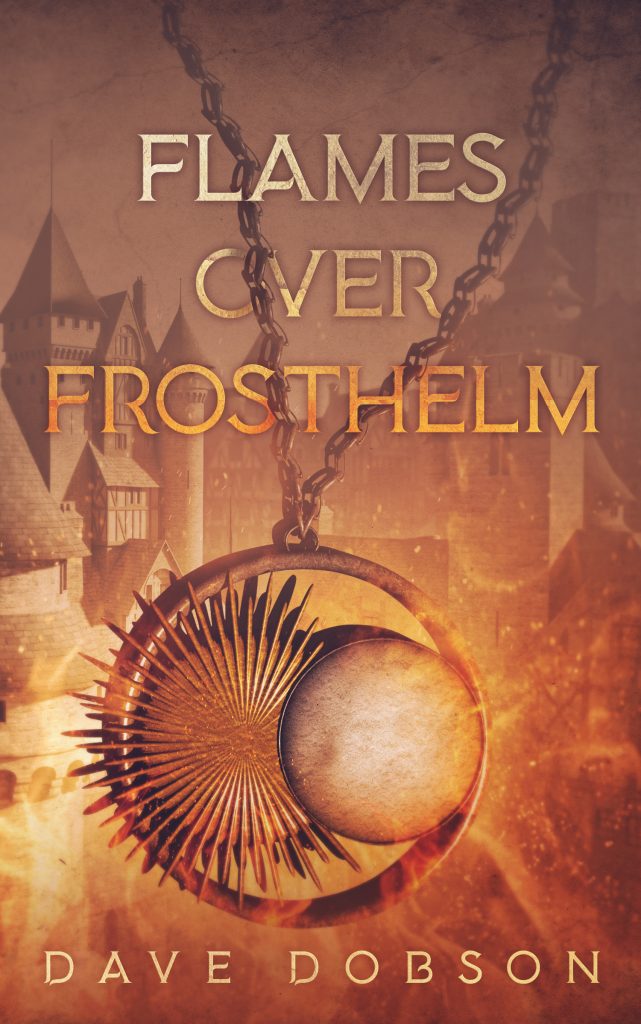 Sometimes, your case takes a left turn. Or three or four. Marten Mingenstern and Boog Eggstrom are provisional inspectors, fresh out of Inquisitor’s Guild training and eager to prove themselves. Assigned the mundane task of tracking down stolen jewels, they instead uncover a mysterious cult set on destroying the city. After a thief explodes, they earn the enmity of a vicious noble, the Chief Inquisitor gets bought off and goes rogue, they are seized by barbarians, and they are sentenced to death at least a couple of times. In a final, frantic race with prophecy, they face ruthless fanatics, a city turned against them, and terrible forces long buried.

Flames Over Frosthelm is the first novel about the Inquisitor’s Guild, the investigative arm of the government of Frosthelm, a medieval city-state where criminals thrive, nobles scheme, and dark secrets lurk. Expect intrigue, mystery, swordplay, adventure, politics, romance, and the strong bonds of friendship. And a little magic along the way. Described as Princess Bride meets CSI, this new novel is a tale of classic adventure with a healthy dose of humor.

1. What inspired you to write this book? Tell us a little about how this story first came to be.
I have always loved fantasy, and I also like mystery stories and police procedurals, so I thought it might be fun to try to merge those genres together. I also love humor in books, so I tried to make the book funny as well. So, the main inspiration was that kind of genre. Quickly, I established a bit of an odd couple as my main hero team, the narrator being small, clever, and insecure, with a little bit of magical knowledge, and his partner and best friend being large, clever, and very confident, with zero magical talent, but making up for it with weapons training and general bravado. After that, I just let the story develop, working through the mystery with the characters. I’m not a plotter or outliner – I mostly just write and find out what happens that way, without a full idea of where it’s going or how it will resolve, at least initially. About halfway through, I start to see how it ends, and then I can bend the story towards that ending, and then of course when I do edits, I can make it all a lot smoother and more satisfying.

2. What, if anything, did you learn when writing the book?
While writing this first full book, I learned the scale of a novel – how much writing and revising it takes to produce something like this. Because I wrote this one slowly, over many years, that made the task seem more difficult than it is. This book took me seven years for the first draft and another seven for the final version, but for my most recent book, I wrote the first draft in a month, and the revisions should take no more than another month. So, I guess I also learned the skills and schedule I need to put myself on to be far more productive, and I learned  that I enjoy writing and sharing books with readers.

I also learned a great deal in the editing process with the help of my developmental editor. One part of that was thinking about character, voice, and perspective. The editor felt I had made my main character too insecure and unlikable, and yet I’d had people like him, and they helped me retool him to be a more interesting and less stock character and to have the other characters react more naturally to who he really was. Another aspect that came out in the edit was that I had thought that I’d done a pretty good job of including an equal number of male and female characters, but my editor told me that it only seemed that way because fantasy in general is tilted so far toward male characters, and what I had done wasn’t near an even split between male and female characters. Being a data nerd, I went through the book and kept a spreadsheet of characters, and the editor was totally correct – I was at about 30/70 female/male. I made it a point to correct that, and the final version of the book has a near-exact 50/50 split of male and female characters. Some readers have remarked on how many female characters there are, especially in positions of authority, which is what I was after. In my most recent sci-fi book, Daros, I include a couple of non-human races, including one of the narrator characters, who are non-binary, and I’m still working on doing better with inclusion.

3. What surprised you the most in writing it?
I would continuously surprise myself by ending a chapter in a way that I hadn’t imagined, with a surprise discovery or bit of new knowledge. I wasn’t trying to do that consciously, really, but it ended up with a nice rhythm for a mystery, where new clues and people and developments come up as scenes wrap up. There’s actually one major development in the plot, that turns into a really important part of how the story ends, that I just suddenly thought of and added in because it seemed surprising and cool. Then, I had to deal with it, make it part of the whole storyline, and have the characters try to make sense of it, and I had to go back and set it up a little better when editing, but it turned out to be a really neat aspect of the story. I love when I can do that with unexpected developments.

4. If it’s not a spoiler, what does the title mean?
It’s not much of a spoiler, because it shows up very early in the book. One of the characters sees an image of the future in the Augur’s Pool, a magical tool the Inquisitors’ Guild uses in their investigations. The image shows the city of Frosthelm bathed in flames raining from the sky. The pool does rarely provide glimpses of the future, so this is pretty concerning to the characters, and they spend much of the book worried about this prophecy.

5. Were any of the characters inspired by real people? If so, do they know?
No, none of them were, although of course by the time you’re in your late 40’s, when I published it, you’ve run into a lot of folks, and they can’t help but influence you as you write. But nobody is a direct parallel to the real world.

6. Do you consider the book to have a lesson or moral?
No, not really. I always like stories where people are in over their heads but persevere to try to do the right thing, to help, so that’s part of nearly everything I write. Not really a moral, but maybe more how I want the world to be.

7. What is your favorite part of the book?
My favorite part is the jokes, I think, although the story ended up being far more about the adventure and the struggle than the humor. I wrote a few scenes explicitly for comedic value, but most of the humor actually just comes up in dialogue, or in the inner monologue from the main character, Marten, where he makes observations about people or events.

8. Which character was most challenging to create? Why?
The villains were the hardest, I think. Making them complex and real while at the same time making them do bad things for meaningful reasons is much trickier than heroes, who just try to do good things because they’re the right thing to do.

9. What are your immediate future plans?
I’m releasing a fourth book in the Inquisitors’ Guild series, The Woeling Lass, very soon, in March, and I have another totally different book, a thriller set in the modern world with light sci fi elements, that I’m doing edits for now. Once those are done and out the door, I hope to do another new book or two by the end of the year. 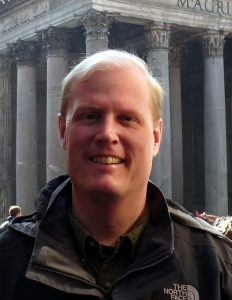 In addition to his novels, Dave is the author of Snood, Snoodoku, Snood Towers, and other computer games. Dave first published Snood in 1996, and it became one of the most popular shareware games of the early Internet. His most recent project (other than writing) is Doctor Esker’s Notebook, a puzzle card game in the spirit of escape rooms.

Dave taught geology, environmental studies, and computer programming at Guilford College for 24 years, and he does improv comedy every week at the Idiot Box in Greensboro, North Carolina. He’s also played the world’s largest tuba in concert. Not that that is relevant, but it’s still kinda cool.

One Reply to “Spotlight & Author Interview: Flames Over Frosthelm + Giveaway”