Meet the Magicorum: modern folks who are supernaturally locked into fairy tale life templates. For eighteen-year-old Elle, that role is Cinderella. Meanwhile, Agatha is her evil stepsister. Things go downhill from there…

Cinderella On The Run
Elle—never call her Cinderella—has found the love of her life in Alec Le Charme, the prince of a jewelry dynasty. But when Alec gets spirited away, Elle must ditch her Manhattan home for the perilous Faerie Lands. To save Alec, Elle must also swap her glass slippers for a flying carpet. But will switching templates from Cinderella to Aladdin snap Elle’s sanity?

Whatever. Bring on the straight jacket. Elle is one Cinderella who’s determined to save her prince, no matter what.

Evil Stepsister or Elf Queen?
Agatha always accepted her role as Elle’s evil stepsister. Then her life template changes from nasty sibling to evil elf queen. Agatha has one thought on that score. Thanks but no thanks. Agatha refuses the regal life, even though stepping away from her crown means ignoring her lifelong attraction to the elf prince, Jacoby.

Then everything changes. Agatha discovers that Elle’s life is at risk… and the only way to save her Cinderella is by teaming up with Jacoby. Trouble is, that’s a lot of togetherness. Working with Jacoby could easily end in disaster, not only for Agatha’s heart, but also for Elle and Alec’s lives.

I stand before Cynder Mercantile, the place where I grew up. It used to be a brightly-painted storefront that showed off the coolest art stuff in the city. Now it’s nothing but boarded-up windows and faded graffiti.

A few weeks ago, I visited Faerie and discovered my heritage as an elf. Ever since then, I’ve been living in Cynder and looking for some paperwork. With my mother and sister gone, who actually owns this place? Me, Elle, someone else? I’m on a mission to discover the truth.

Today I finally found a records room. I could check through everything right away, but the place is dark and filled with cockroaches.

At least, that’s my story and I’m sticking to it.

So instead of going through old papers, I’m off on a walk to get some coffee. Stepping away from the ruined storefront, I turn down the deserted street.

That’s when I feel it. Someone is watching me.

Chances are, it’s Jacoby. He’s an elf prince and my personal nemesis. Also, his regular attempts at conversation are the highlight of my day.
I know. Complicated.

“Jacoby, is that you?” I try hard to make my voice sound irritated, but I don’t do such a great job. It’s lonely sitting in Cynder Mercantile, surrounded by dust bunnies and memories. If Jacoby didn’t invite himself along to my nightly coffee runs, I wouldn’t have any human interaction. Sure, all I do is tell him to go away, but it’s still the highlight of my day.

Did I mention our non-relationship is complicated? It is.

Jacoby steps out from a nearby alley. He’s unnaturally handsome with his broad shoulders, aristocratic cheekbones and cute swoop of black hair. Guess that goes along with being elf royalty. You always look camera ready.

The prince leans against the building’s facade and kicks his right ankle across his left. “You really need to stop following me,” he declares. “It’s rather embarrassing.”

“I’m stalking you?” I try to look offended. Not sure I’m doing such a great job.
“It’s all right.” Jacoby gives me the dazzling kind of smile only the elves can pull off. “I forgive you. You can even buy me a coffee.” 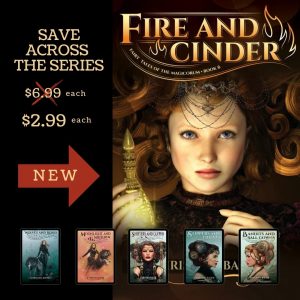 Fairy Tales of the Magicorum
Modern fairy tales with sass, action, and romance
1. Wolves and Roses
2. Moonlight and Midtown
3. Shifters and Glyphs
4. Slippers and Thieves
5. Bandits and Ball Gowns
6. Fire and Cinder
7. Fairies and Frosting