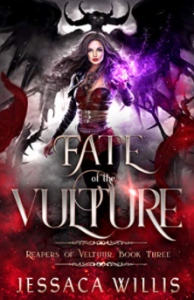 Fate of the Vulture
(Reapers of Veltuur #3)
by Jessaca Willis
YA fantasy, paranormal

Darkness comes. An ancient feud has set the realms off-balance for eons. And hope rests on the shoulders of one orphaned, distrusting, former Reaper.

Sinisa Strigidae has never been normal. She’s spent the last three years of her life as a Reaper, a slave to the underrealm. When she finally freed herself, it wasn’t to return to an ordinary mortal life, but to become a Guardian, an empowered being forgotten by almost all of mankind.

But now she discovers she’s even more than that.

An ancient prophecy, foretold by the very Divinity of Fate herself, proclaims that Sinisa will be the one to defeat Veltuur, ruler of the underrealm.

But Sinisa has only just escaped his clutches and is trying to reclaim her life. Her path is her own now and she’s not so eager to return to the place that kept her imprisoned.

But her dear friend, King Acari, is still trapped there, and she would do anything to see him freed, even if it means going against one of the Gods.

Fate of the Vulture is the final book in this dark, high fantasy, adventure series. Enter a world where the Reapers are the balance between life and death, where the Gods who once reigned over the mortals have suspiciously disappeared, and where one young girl finds she is somehow tangled in all of it.

If you loved The Nevernight Chronicles, Reign of the Fallen, The Merciful Crow, or books by Leigh Bardugo, Cassandra Clare and Shayne Silvers, you will devour this grim saga.

Wings give you strength for this epic, heart-wrenching conclusion to the story of a girl who belonged to both the mortal and underrealms.

This book contains themes of death, grief, trauma, and discrimination not suitable for the faint of heart. It is a dark fantasy series, people. You have been warned. 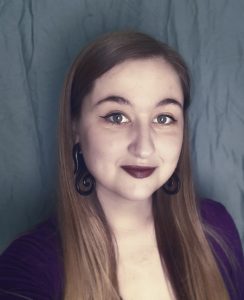 One Reply to “Book Blitz: Fate of the Vulture, by Jessaca Willis”