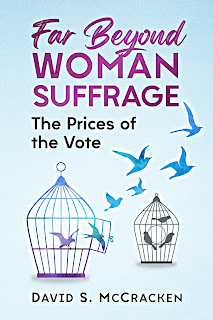 The Prices of the Vote, #1
David McCracken
Genre: Alternative History
Date of Publication:  8/25/21
ISBN: 979-8464929616
ASIN: B09DPSTN35
Number of pages: 104
Word Count: 32,514
Cover Artist: PixelStudio
“It isn’t just about women in long skirts finally voting!”
It isn’t just about women in long skirts finally voting. The racists and the rich know that, and the politicians worry.
Mercy Martin has an inside view as the battle for woman suffrage nears a climax, but she encounters many puzzles.
So many women and Southern states oppose votes for women.
So many people are afraid it would bring on free love, abandonment of family, economic catastrophe, or communism.
So many suffragists are willing to abandon black women voters.
From an innocent teen to a young adult, Mercy has a central role in the campaign. She advances from confinement in a suffragist jail cell to the national campaign for the suffrage amendment. She campaigns around Tennessee, ending at the capitol for the explosive climax in the last state that might ratify the amendment and grant the vote to women.
Why should something so clearly right be so hard, and why were some bitter compromises made? Mercy is right in the middle, relied on by key players. Along the way, she acquires a husband, a baby, and better parents than she was born with.
This is an intimate view via alternative historical fiction, as accurate as it can be and as thoughtful and moving as it must be. In this first novella of a series, Mercy jumps into the campaign for woman suffrage and prepares for a vital role in the coming decades. She’ll continue on into the wider civil rights struggle growing out of woman suffrage.
Amazon

Anita and I have taken a circuit northwest from Knoxville and back around to the northeast. We’re canvassing as many legislators and their key supporters as we can track down. Finding them is the tricky part. Sometimes we go as far as the road goes and finish the journey to an isolated farmstead on foot, with our dresses trailing in the dust. We’ve been drenched by rainstorms, chased by watchdogs, and even had to change a flat tire, which isn’t that easy in a long dress, but we find our men.

Some seem to be avoiding us, like Representative Cletus Jacobs. He keeps barely visible off in his woodlot. We mark him as a “no.” Senator Phil Gridley graciously, really graciously, says we are communists betraying our gender, our state, and the country. Fortunately, the next two are warm and positive. However, Sen. Billy Broadus says he is nervous the women’s vote will support that anti-American League of Nations. He seems mollified when we point out it would first have to go through a vote in the U.S. Senate, where it is sure to fail.

“Anita,” I ask, back in the car, “why is there such a fear of communism here?”

“Well, with the recent Russian Revolution and the widespread unrest in European countries after the war, people are nervous, especially people with property. You may not realize that Communism seemed on the verge of sweeping across Europe after the war, with uprisings all over. I guess women are considered softies who might vote communists in or go easy on them. Maybe they’re especially sensitive in the South on the loss of property since their human property, slaves, were ‘taken’ at the end of the Civil War.”

“I guess big business is hyping the fear for their own purposes, against labor unions.”

“You’ve got it, Honey!  That started before the Russian Revolution, as a way to smear and foil labor unions.”

“I don’t guess we could ever reach people so concerned about communism, however they got concerned!”

“ ’Not bloody likely,’ to use a term  Alice Paul picked up from a friend over from England. (The shocking phrase was uttered by Eliza Dolittle in George Bernard Shaw’s new hit play, Pygmalion. Alice loves throwing  it out.)”

Driving east from Livingston, on a dim overcast day, we have a scare. Three white-robed riders and horses are moving into position as if to stand astride the road and block our path. Behind us, we see three more horsemen trotting out of a grove we had just passed and following us.  We look at each other and gulp. It doesn’t look good, even if their robes look rather shabby. A lonely road doesn’t seem ideal for a twilight chat with six mounted Klansmen. Luckily, they hadn’t reckoned how fast our Blue Knight moves or how well Anita can handle it. Just as the ones in front are getting into position, Anita swerves far over onto the left edge of the road and races onward. The nearest horse nervously dances back, then rears and throws his rider as we roar around them.

“I thought the Klan was dead,” I say.

“Apparently, that Birth of a Nation propaganda film of a few years back is reviving them. Next, they’ll burn a cross.”

“I hope we’ve seen the last of them. How’d they know where we were?”

I think and respond, “Was Senator Broadus actually less friendly than he seemed?”

“I wondered why he spent so long in idle chatter before he let us go,” offers Anita.

David McCracken became a political activist when the Supreme Court ruled against school segregation. Fellow students joined him in urging the school board in Winchester, KY, to integrate immediately. He campaigned for a Democratic governor and joined the ACLU before he graduated from the University of Kentucky. After debating at U.K., he got a degree in economics and a job with the U.S.  Department of Commerce.

When his daughters approached school age, he became increasingly concerned with how he wanted them schooled. Researching that, he decided teaching was what he really wanted to do. He got a master’s degree in elementary education at Murray State University. He taught for several years, until the fact that his girls qualified for reduced-price lunches based on his salary got to him. Ronald Reagan’s anti-government policies prevented him from returning to government work, so he took programming courses and shifted careers again. Programming was like being paid to solve puzzles all day, but teaching eventually drew him back until retirement.

For many years of this time, he was working intermittently at a novel that became Fly Twice Backward: Fresh Starts in Times of Troubles. This concerned his waking on his twelfth birthday, trying to figure out what had happened, following his new opportunities, and ultimately outliving an evil president resembling Donald Trump. After thirty-six years, David finally published it as an interactive alt-history Kindle novel. He soon started Far Beyond Woman Suffrage: The Prices of the Vote, an alt-history novelette dealing with the campaign for woman suffrage. He finished this piece in just ten months. At 81, he is bold(?) enough to plan this as the first of a six-volume set dealing with the far-reaching results and implications of woman suffrage. His completed novels and another in the works are presented for discussion on a new website, DoFancifulFlights.com David now lives with his third wife, stepdaughter, and step-grandson near Winchester, VA. He has a son from his second marriage, six grandchildren, and two stepchildren. And a funny black dog with four white feet. 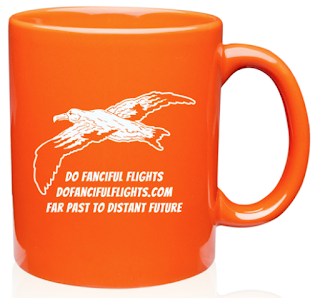 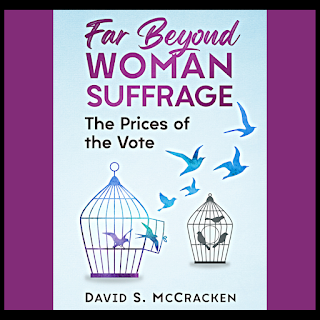 One Reply to “Spotlight & Excerpt: Far Beyond Woman Suffrage + Giveaway”