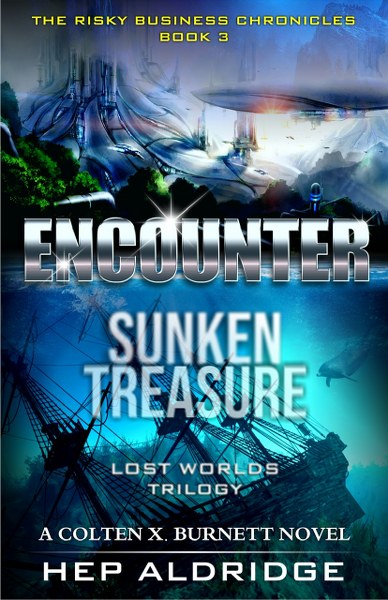 “A saga where, space, time, and the search for treasure collide!”

This final installment of the #1 bestselling Risky Business Trilogy finds Colten Burnett and his intrepid team of adventurers in the jungles of Ecuador in search of the elusive Golden Library.

Pursued by multiple enemies, the team uncovers jaw-dropping otherworldly treasures linked to a mysterious lost civilization that has the potential not only to enrich them but to save the planet Earth from self-destruction.

Get the ultimate edge of your seat tale of exploration and the most unexpected discovery in modern history today.

As the mystery deepens from the peaks of the Andes to the ocean floor off Florida’s Space Coast, Colten X. Burnett, and the Risky Business team are confronted by new perils and discoveries in their extraordinary quest for both treasures and what might be explosive, historical findings.

Will they find the elusive treasure galleon, is the legendary golden library in Ecuador real?

REVELATIONS – Volume 2 of the Risky Business Chronicles will engulf you as a virtual participant in this amazing adventure.

It is the second book in Hep Aldridge’s action and adventure series about Dr. Colten X.

His knowledge can make them all rich… or get them killed.

From the depths of the Atlantic off Cape Canaveral Florida, searching for sunken Spanish treasure, to the Andes mountains of Ecuador chasing the legend of a lost golden library, Dr. Colten X. Burnett and the Risky Business team are on a quixotic adventure.

While trying to make an honest, well sort of honest living, searching for remnants of the lost 1715 fleet, Risky Business Ltd. becomes entangled in a mystery that covers two continents and may rewrite history.

The lure of uncovering a lost civilization, as well as the secrets it holds, motivates the team on their dangerous journey into a cosmological unknown.

Hep Aldridge is a certified scuba diver, cave diver and amateur archaeologist whose main area of interest is Pre-Columbian cultures of the Americas.

He has led or been part of archaeological expeditions to Mexico and Honduras, making discoveries that have been reported in National Geographic Magazine.

Hep’s related interest in space, and space exploration and “things unknown” was fueled by his father who worked for NASA.

While living in New Mexico, he began to question the many strange and unexplained things he saw in the night sky in the mid 60’s, and also developed an interest in lost treasure that has stayed with him his whole life.

The combination of these diverse interests led to the genesis of the Risky Business Chronicles, Book One, his first novel of a three-part series.