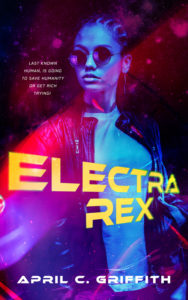 Electra Rex, self-appointed ‘galaxy’s greatest starship captain’ and last known human, is going to save humanity or get rich trying!

Electra Rex, the last human in known space, is broke—worse than broke, deeply in debt and out of options. After a desperate, drunken attempt to fix her faltering life, she finds herself in a deeper hole after stealing the most stylish starship she’s ever seen, but it comes with a massive lien.

She’s left with a fast ship, a nearly indestructible debt-enforcement robot named Letterman watching her every move and a lead on a lucrative job with the mysterious organization known as Bi-MARP, which is set to rebuild Earth on the two-thousand-year anniversary of its destruction.

Across two galaxies, she struggles to stay one step ahead of space pirates and creditors, all while trying to catch the eye of a beautiful, vivacious bisexual clone named Treasure, who was recently rescued from a top-secret university lab run by academic squids.

She succeeds in seducing Treasure—or perhaps it’s the other way around—while they run scams to find earthling relics like the original formula for Coca-Cola, a 1968 Volkswagen Beatle, a mostly complete Monopoly board game and a largely accurate, if not small and green, clone of an elephant. All the while, Electra has to hide the fact that Treasure is actually the most valuable item on the Bi-MARP list—a fertile human female.

When the truth of humanity’s demise and the goals of Bi-MARP are uncovered, Electra, the galaxy’s foremost transgender hero, decides that the riches and fame aren’t worth the sacrifices, and she turns on her former employer to rescue Treasure a third time, completing her search for money, what it means to be human without the rest of humanity and, most of all, love.

“I am the last of my kind, and I suck,” Electra mumbled to herself, throwing back another drink. On the first night of a planetary holiday, Electra Rex was drunk, scorned and looking to buy a gun. She couldn’t recall exactly which holiday it was, though, since there were so many. The planet took time off constantly to celebrate a googolplex of different accomplishments, important figures and momentous occasions across hundreds of alien species. It was a wonder anyone did anything but observe holidays. She sat in a window booth, watching ships both large and small land at the valet pad while she waited.

Little of her Embarker pedigree remained after years away from the flotilla. Endless toil and nomadic life marked her people’s existence, even if it didn’t describe her life. She’d lived in an apartment in Authrillia’s largest northern city for more than a year, which should have made her itchy to get back to spacefaring, but she wasn’t. In fact, she wasn’t much of anything. Apathy had settled heavily over her and it had made her careless—at least, more careless than she’d already known herself to be. To pay the bills, she engaged in the least Embarker type of work she could find—being a professional party guest. ‘Come see the last known human woman, drink with her, maybe even…’ But that was over. She’d frittered away too much money on fleeting things, another Embarker no-no. A job meant to replenish her account at the last moment and save her apartment, her precious creature comforts and allow her reckless lifestyle to continue for another month hadn’t paid out. Now she had only the clothes on her back and the cash in her pocket. Enough to buy a gun, she hoped.

She’d given the DJ of the club a copy of Margaritaville, promising a transcendent experience. Jimmy Buffet sang while a dozen different species of aliens attempted to dance on the multi-tiered dance floor to the ancient Earthling music. Electra’s dad had loved Jimmy Buffet. ‘The finest music in the galaxy,’ he’d said. Even with great effort and a good deal of booze in her system, she couldn’t hear what he’d heard. She must not have inherited his ear for classical music. What the hell is a flip-flop anyway?

Normally leering over spacecraft cheered her up, which was why she’d selected a window booth near the landing pad. She wasn’t into the functional caravan freighters that comprised Embarker fleets. She liked the chic, silky, beautiful spaceships that focused on form over function. The bleak, unrepentantly crappy mood that had clung to her throughout the day lightened an iota at the arrival of her dream ship in the valet station directly below her window. An oval saucer body, three hundred feet long, sleek and stylish, with three classic fins off the back, it was—it had to be—a Cadillux 1959 Dorado edition. And it was pink, the brightest, most beautiful pearlescent pink trimmed in the shiniest of chrome. Electra stood on her knees on the booth’s bench and pressed her face drunkenly against the glass. She wanted to lick it. She didn’t care that the thought was absurd. That ship was so gorgeous that it deserved to be licked.

The transparent arrival tube extended to the ventral port while a valet-bot lowered onto the dorsal spine above the cockpit that sat directly in the middle of the oval. Electra wanted to see what wondrous creature possessed such a magnificent spaceship. After several agonizing moments, the owner of the ship passed from beneath the edge within the arrival tube and Electra’s elation turned to fury—Weisella. Fucking Weisella. Her need to buy a gun redoubled, not to begin a life of mercenary work—which was the Embarker way after going bust—but for murder, satisfying revenge on the woman who had thoroughly screwed her. The fact that such a heinous, underhanded creature could own such a glorious ship was a crime on par with regicide in Electra’s inebriated mind.

Weisella was a Panaeus, a vaguely humanoid alien species with advanced telekinetic and telepathic powers. She was only a little taller than Electra’s five-and-a-half feet. Her heart-shaped face had two enormous black, almond-shaped eyes, no nose or mouth. Frilled spines replaced what could be called hair. A cluster of five ephemeral tentacles stood in the place of an arm on each side, and instead of legs, she had what looked like a jumbo, curved shrimp tail. Indeed, the only attractive features Electra saw in Weisella were her money and her strangely perfect breasts—three of them across the center of her chest, prominently displayed since Panaeus didn’t wear clothes. Weisella liked jewelry, though, and she was sporting a shiny new metal ring on her tail that was probably just brimming with expensive tech.

Electra’s memory of the night before was fragmented at best. She’d been hired to attend Weisella’s gala for the Panaeus New Year, partially as the spectacle of having a human in attendance and partially as Weisella’s date. Electra didn’t mind the escort portion of the work. Weisella was rich, enchanting, well-traveled and she’d paid extra for the pleasure. Except she hadn’t actually paid. The transfer had bounced back in the morning when Electra had tried to use the money to get the foreclosure lock off her apartment door. The timer on her lien had expired and everything in her apartment had gotten incinerated while she watched through the little glass window on the door. Everything her parents had ever given her, every keepsake from Transition Island, every souvenir she’d collected in her travels was gone in a flash of white fire and a quickly ventilated puff of smoke, all because Weisella had ripped her off.

Electra had done her part. She’d danced, charmed and been better than presentable in her skin-tight Utopalex pants, knee-high go-go boots and a black corset that made the most of what she had. The Panaeus guests had loved her. Weisella had loved her. By every measurement, Electra had performed perfectly. They’d retired to Weisella’s bedroom at the end of the night to continue the festivities. Things hadn’t gone as smoothly behind closed doors. Electra had been intoxicated from drinks, a few drugs she wasn’t familiar with and the high oxygen environment created in the penthouse, plus she’d never slept with a Panaeus before. The swell of Weisella’s backside, what looked like a delightfully curvaceous butt? Nope, that was a nose and ‘Please stop fondling it.’ Okay, the breasts were breasts, right? Close enough. Fondle those, lick them and fall asleep face-first in them. Was that why Weisella had bounced back the payment? Failure to consummate? It was explicitly stated in Electra’s contract that sex was not a guaranteed part of any escort arrangement. It was her prerogative. Besides, she’d tried. There simply weren’t obvious sex organs on a Panaeus—at least none Electra could find in her sloppy groping.

The valet-bot guided the Cadillux away after Weisella entered the club a couple of floors beneath Electra’s booth. The little bot was flying the beautiful ship toward the stacks. Not the stacks! That was where someone parked a junker that nobody would want to steal. The stacks were for heaps with so many scratches and dents that a few more might go completely unnoticed. The Cadillux could be scraped, dinged, stolen or breathed on wrong in the stacks. Only the worst kind of philistine would park such a beautiful vessel in the holding pen for pig ships!

“That tight little butt could only belong to the Electra Rex,” a gravelly voice sounded behind her.

Electra sat back down and glared at Fizan. Her underworld contact was a Gromphra, essentially an eight-foot-tall cockroach in every despicable sense. Fizan was too large and inflexible to actually sit in the booth, so she stood at the end of the table, inspecting Electra with her dead bug eyes. It wasn’t that Fizan was a particularly vile example of the species—all Gromphra were lecherous and blunt. It was considered a badge of honor to gross out other species—at least, that was what Fizan claimed.

The seemingly transparent shell on the front of Fizan’s torso opened up like a flasher’s raincoat. It was clothing and body armor mixed and wasn’t actually transparent. Within the shell, guns, knives and a dozen other nefarious items were concealed behind the projected image of her chitinous trunk.

Electra had enough cash on hand to afford a decent gun. A carbine worked best for mercenary work, although a small pistol would be ideal to assassinate Weisella on a crowded dance floor. Shooting anyone or anything wasn’t really her style, and the reality of what she was doing rolled over her in an unpleasant manner, accompanied by a wave of nausea. Electra scrunched her nose while she considered the weapons until she spied something entirely different.

“How much for the ID-clone?” 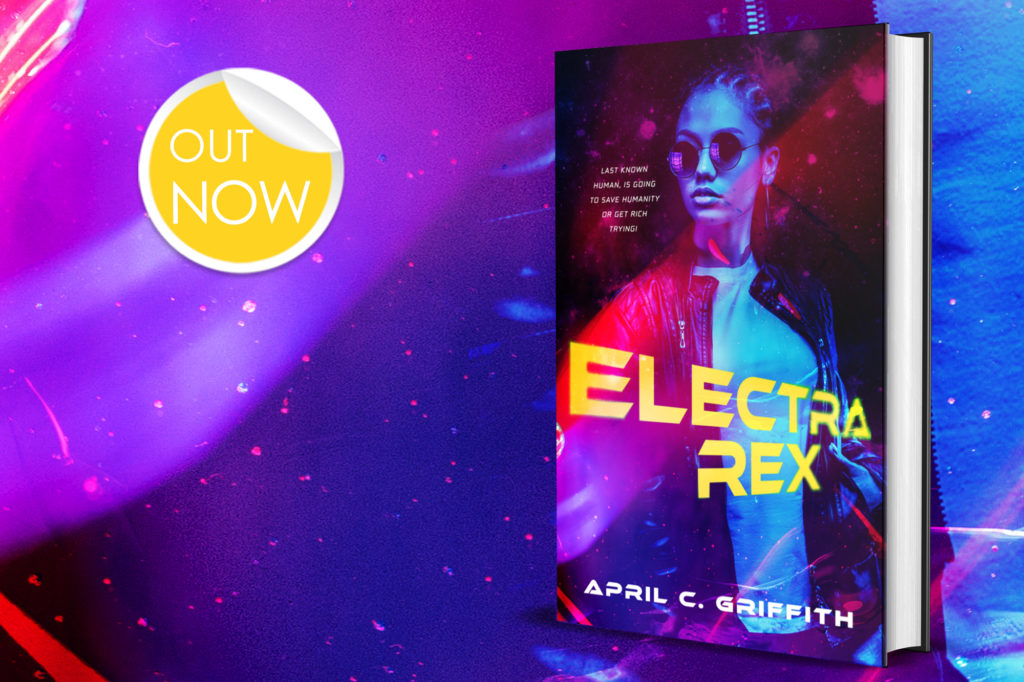 April Griffith is a lesbian, a rogue academic, and a giant nerd. She’s from Oregon, but calls San Diego her home. Her passions include LGBTQ+ political activism, creating safe places for women in Dungeons & Dragons, and writing the books she wanted to read when she was a kid. April worked on the Amazon Gladiator series (Anaxilea: Amazon Princess and Anaxilea: Gladiatrix) under a pen name.

APRIL C. GRIFFITH IS GIVING AWAY THIS FABULOUS PRIZE TO ONE LUCKY WINNER. ENTER HERE FOR YOUR CHANCE TO WIN A LOVELY GIFT PACKAGE AND GET A FIRST FOR ROMANCE GIFT CARD! Notice: This competition ends on 23rd March 2021 at 5pm GMT. Competition hosted by Totally Entwined Group.