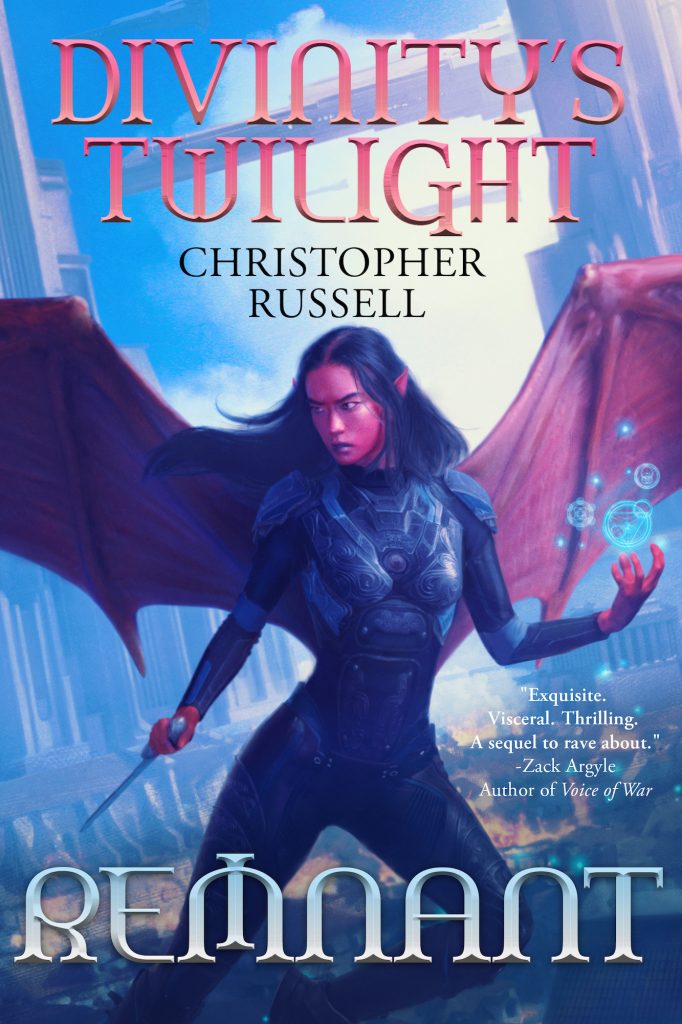 Power is a curse.

As Vallen and his fellow cadets flee fallen Darmatia, he is forced to confront the ghosts of his past. The friend who perished that he might live. The girl whose smile haunts his nightmares. Now, a third voice joins them—something dark, something ancient. And the more Vallen uses his magic, the stronger it becomes.

Tools exist to be used.

The flames of Sylette’s vengeance are all but quenched. With each passing day, the dominion of the Sarconian Empire grows, and her treacherous father’s throat drifts further from her reach. Sylette’s last hope is a coded message, one that promises a growing resistance against the Empire. But even if she gains the means to avenge her mother’s murder, one question remains: how many ‘tools’ is she willing to sacrifice to see her vengeance through?

What color is love?

Renar has learned to hide a great many things: his emotions, his art, and one truly devastating family secret. But when he must face the man who’s controlled his life from the shadows, will he choose the family he’s always known, or the dysfunctional crew he’s been shackled with?

For every ending, a beginning.

Embers of conspiracy flare in Nemare and Sarconia. A resurrected Sarcon plots to reclaim his imprisoned flesh. As the winds of war swirl and forgotten myths rise, the choices these cadets make could save their country . . .
. . . or unleash something far, far worse.

The Empire Strikes Back • Portal, Portal on the Wall, Don’t Show Me My Past, Lest I Fall • Ice Queen of Hearts

“Whoa there!”
With a screech of iron on cobbles, the carriage lurched forward, then settled to a stop in front of the broad steps of the Heronah mansion. Renar Iolus hurriedly hid his silver pocket knife inside the sleeve of his fine coat. He’d altered the hem just enough to conceal it against his forearm, though the resultant wad of scratchy fabric chafed miserably against his skin.
He shifted to the left on the velvet padded seat, leaning against the window and feigning that he’d been staring at the passing city sights during the ride. When the cab door opened, he favored Ral the coachman with an innocent smile.
“Here already?”
The dusky-toned, bare-scalped courtier bowed at the waist, his twinkling black eyes a match for his impeccable servant’s garb. “Yes, Young Master. Didn’t you see us pass the estate gates?”
Renar scampered down the hanging carriage steps. At the bottom, he strained skyward, standing on his tiptoes to reach the second gold button above Ral’s waistband. Ha! he thought. I’ll be taller than him in no time!
“Obviously, Ral,” Renar replied, waving the arm that didn’t hide the knife. “The jalliper berry bushes lining the drive are in full bloom, their mauve buds contrasting beautifully with the thin sheathes of ice encasing their branches.”
Ral’s dark gaze flashed concern. He ducked into the carriage, and when he reemerged a moment later, he held a lace embroidered pillow. The same pillow Renar had used to cover up the carving he’d been etching into the interior paneling of the carriage.
“What is this?” Ral asked, tone accusing.
“A pillow?”
“Indeed. A pillow which you used to cover up vandalism of the Colonel’s prized carriage.”
Renar bristled. “Vandalism? My art is an improvement on the drab ornamentation my father thinks passes for culture in military circles.” He jerked his arm toward the coursing waterfall scene he’d etched into the wood.
The wrong arm—a horrible mistake. Before he could snatch back the limb, Ral grabbed his elbow, pinched it hard enough to make Renar’s eyes water, and rolled up the sleeve to expose the outline of his knife. Two tugs at the hidden pouch sent the blade tumbling toward the ground. Graceful as a sweeping brush stroke, Ral caught it between two fingers, raising it above his head which Renar couldn’t reach even if he jumped.
“Colonel Iolus gave this to you as a gift.” Disappointment etched Ral’s hard features, but Renar heard something odd in his voice: an almost wistful sadness.
“Am I not free to do with father’s gifts as I please?”
Ral inhaled sharply. ” . . . No. This is a combat knife.” He traced the tapered blade and tapped the channel meant to drain blood away from the cutting edge. Revulsion twisted Renar’s stomach. Fighting disgusted him to the point of sickness. “You should not be using it to draw—”
“Carve,” Renar insisted.
“—on the Colonel’s carriage. You know how he views your . . . hobbies.” Ral chose his final word carefully, kindly. Far kindlier than Renar’s father, Colonel Hardwick Iolus, would have.
The boy’s throat constricted, going dry as the desert wastes beyond Nemare’s walls. “Will you tell him?” he whispered. Somehow, speaking the words aloud made Renar believe they’d come true.
“No.”
Flicking his wrist, Ral tossed the knife into the air, catching it by the blade in his other hand on the way down. He passed it back to Renar—hilt first—but the wide-eyed lad was lost in thoughts of how to sketch the skilled attendant.
Charcoal for the skin, rubbing it in after application for a smooth finish. Long lines for the blade toss. Have to give the impression of motion, as Gabonni’s Ten Techniques suggests. Highlight the gleam in his gaze by making the area around the eyes darker, and . . .

Renar blinked. The mansion’s thick double doors were open before him, letting blocky shadows and the early spring chill into the grand, marble-floored foyer. Ral was at his side, and two similar servants flanked the opulent elegoras-crafted doors.
The courtier chuckled. “The Veneer took your senses again, Young Master.”
There was no reason to argue. Whenever the compulsion to draw, carve, paint—any type of creation—hit him, Renar lost all awareness of where and what he was doing. This time he’d merely pocketed his knife and climbed the estate steps in a daze, but at other times he’d disappeared from the Iolus estate or fallen down the manor stairs.
Unfortunately, his clumsiness was the least of his father’s reasons for despising the pursuits that brought him joy.
“What was it?” Renar asked. Their host, the daughter of the Heronah family, had yet to appear. “I’m curious what gave me away. Father took my last sketchbook, and you had no reason to suspect I had anything else to work with.”
Ral chuckled. “Your description of the julliper berries. Spring comes early in Nemare. There’s no ice left on the bushes.”
The colorful curse building in Renar’s throat was stilled by the sunflower bouncing down the steps. Dainty slippers on pale legs carried a beaming girl in a yellow smock down the sweeping staircase before them. Golden light, slanting from the stained glass window on the landing behind her, bathed her in a radiant glow that perfectly complemented her bouncing flaxen curls and choice of dress. Renar had scarcely a second to appreciate her radiance before she hurled herself into his arms.
“Rennie!” she cooed. “I’m so glad you could come. I have so, so much to tell you. More than is written in a library worth of books . . . probably.”
“You’re choking me, Angelie,” he managed through her tight embrace. Angelie, a name derived from the angelic Veneer themselves. Like the lilac scent of her hair, it suited her well.
“Oh! We wouldn’t want that.” She danced back with agile steps, then clutched Renar’s hands and began dragging him from the room. “Come, come! There’s something in the ballroom for you, but you must promise not to peek. Oh!” She exclaimed again, pointing a finger at Ral. “You can stay here, Ral. I know he doesn’t like to fight, so I’ll protect Renar if any bad guys attack. Have scones with Maja, or something.”
“I can’t refuse a command from my future mistress,” Ral soothed with an exaggerated bow.
“Good. We’ll call for you when we’re done.” 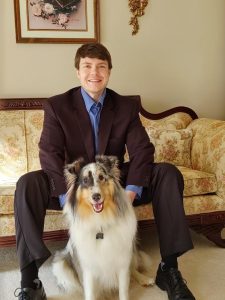 Christopher Russell (native of Williamsburg, VA) is a 29-year-old mechanical and aerospace engineer (graduate of the University of Virginia) who has loved reading since the day he picked up a book and writing since he could scrawl his first letters. After voraciously consuming titles from every genre—ranging from Star Wars to Lord of the Rings—he decided to combine the expertise from his professional education, passions, and Christian faith into a fantasy epic bridging the gap between magic and science. He currently resides in Charlottesville, Virginia, with his loyal dog, Vallen, named after the protagonist of his first work. For behind-the-scenes information on all of Christopher Russell’s works, visit christopherrussellauthor.com.