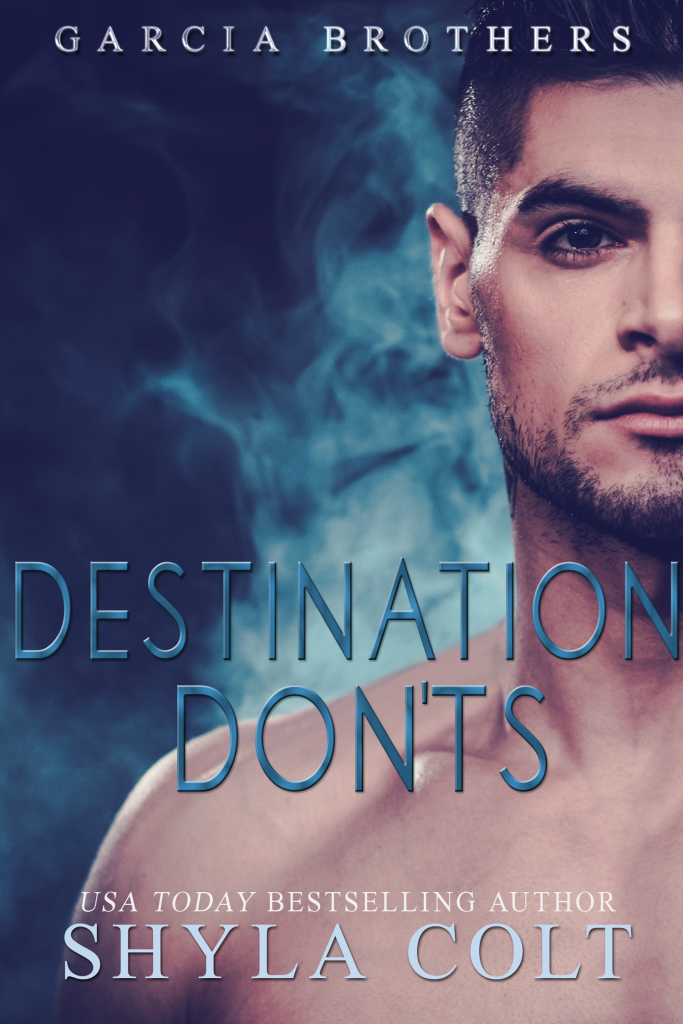 Don’t overindulge in alcohol on the flight

Don’t make out with the hot stranger next to you

Don’t fall in love in paradise

There are rules and etiquette for destination weddings. Kisi and Agustin broke them all. 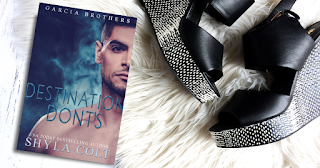 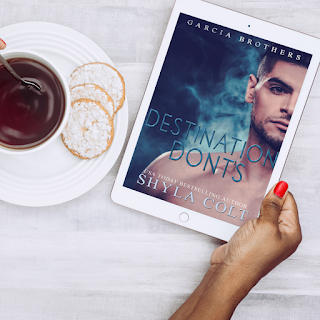 I can’t shake the bit of sorrow that burrowed into my heart the moment I watched K get swallowed by the other travelers in the airport. I need a minute to get my head right and prepare to engage with my parents.

After unpacking my clothing, I hop in the shower. The white tiled showed is massive. The rain showerhead and view of the ocean from the window help me get into a vacation mindset. Washing away the travel, I let the negative energy go down the drain along with the dirt. This is a happy time, and I’m not going to dampen it in any way. My best friend is marrying the woman of his dreams, who’s perfect for him. That means there might be hope for me as well. Forty is the new thirty, and I’m starting to feel the desire to put down roots.

I’ve had wanderlust for so long it took me time to figure out what this new feeling might be. It’s not that I want to stop traveling altogether. I’m just sick of always doing it alone. Won’t Pierce get a kick out of hearing this? Refreshed, I step out of the shower, dry off with a fluffy white towel, and dress. The tropical theme in the room continues with a green leaf covered bed spread and matching curtains. I’m running a brush through my hair when a knock sounds on the door. Tossing my soft-bristled brush onto the counter in the bathroom, I hurry to the front door.

“Brother, it’s so good to see you.” Pierce engulfs me in a hug, and I laugh.  His sandy blonde hair has been tamed for the wedding. Shorter on the left side, it’s got a nice fullness in the front he’s brushed back in a nod to the fifties pompadour. I swear his hazel-colored eyes glow with joy. Nova has been good for him.

“Likewise, my friend.” I pat his back, and he steps into the room, closing the door behind him.

“A life on the road doing what you love will do that for a man.” I grin, laying it on thick to hide the twinge of jealousy at his impending domestic bliss.

“I’ve always admired your ability to go after your dreams and make them come true.” Pierce smiles. “We’re going down a bit early to meet the maid of honor since you’ll both be working closely together over the next week.”

“Nova asked me to put in a request.”

I arch an eyebrow. “What can I do to make Nova’s special day even better?”

Pierce clears his throat. “Can you tone down the Casanova vibe with the wedding party? She doesn’t want any room for mishaps or hurt feelings.”

I chuckle. “My friend, it’s not my fault women are pulled to me like bees to honey.”

I cringe and hold a hand over my heart.

“I don’t want her pissed off this weekend.”

“I get it.” I hold my hands. “I’m here to support you two and celebrate your union. Not troll for a hookup.” I feel a stab of pain. That’s never my intention. I’m not a man who falls often, but I do enjoy carnal pleasures. I never lead anyone on, though.

“I know that’s not you. You never intend to leave a trail of broken hearts behind you, Agustin. Your charm is like gravity. It’s impossible not to be pulled toward you in some way.”

“It’s my curse to bear.” I sigh dramatically, and he chuckles.

“Let’s do it.” I pocket my room key and follow him out the front door.

Is this how everyone sees me? Some sort of Don Juan who never sticks around?

We reach the elevator, and my heart stumbles in my chest. Standing beside Nova is my mystery woman, K. Her lips part, and I remember their taste and feel. She casts a worried glance from Nova to Pierce. I wink.

“There you are.” Nova steps forward, pulling me into a hug and blocking K from my line of vision.

“I’m so glad to have our two favorite people in the same place for the first time.” Nova steps back and turns to K. “Kisi, this is Gus. Gus, this is my best friend since middle school, Kisi.”

Kisi. I roll her name around in my head. A beautiful, unique name for a woman with the same qualities.

I chuckle. “Short for Agustin.”

“We do hugs around here.” I pull her into my arms. “Hello, Cinderella,” I whispered into her ear. “I appear to have found the one who fits the glass slipper she left behind.” I pull back, amused by the fire that flickers to life in the depths of her dark eyes. There’s the woman who kissed me on the plane.

“Pretty confident to assume the role of Prince Charming,” she mumbles.

“Did you prefer Snow White? You did look adorable sleeping on my shoulder.” I cast a glance at the soon-to-be newlyweds whispering to one another as I press the elevator button.

As the car arrives with a ding, and the doors roll open, I admire her hips in the off-the-shoulder white dress with the light blue floral pattern. I stand close to her while the others enter, occasionally brushing our arms as we travel to the main floor. I’ll play along for now, but the fact that we ran into each other again is fate at work. The Garcia men have the zing when we meet the woman we’re supposed to be with. Like our body goes up in flames, and our heart syncs with them. I’m peering at Kisi, feeling lovesick and frightened as hell. Is this where I get taken down by the Garcia zing? No. Be careful what you wish for. You’ve been thinking about settling down for a couple of years.

I jerk to the left and spot my mother and father directly in front of us.  He still towers over me at six foot four, though age has taken some of his mass. His shoulders are still broad, but over all he’s slender, and his facial features are sharper. The square jaw and wide forehead are nearly identical to my own.

“I’ll meet you inside in a moment,” I tell Pierce, who nods.

“Hey, Mom.” I bend down and hug the petite woman with a slender frame to me.

“Finally, I see my son with my own eyes.”

“It’s only been nine months.” I smile as I kiss her cheek.

“Skype is not the same, Agustin.” Mom humphs.

“How’s playing in the dirt coming along?”

“The excavation went well. We’re going to be featured in Nat Geo for the discoveries we found at the Roman soldier site. It’s revealed some previously unknown information.”

“Aren’t they less than reputable these days after the whole Mer people debacle? And that super shark.”

“Megalodon,” I mumble. He always finds a way to snatch the joy from me. “And that’s television. We’re going to be interviewed and published in their magazine and speak at one of the conventions later. It’s a big honor.”

“That’s wonderful.” My mother fixes my father with a cold stare. “Isn’t it, Mateo?”

Dad’s never gotten over the fact that I didn’t want to join his firm or follow in his footsteps like Tomas and Diego. There’s a reason why they’re still single and slightly disgruntled. The weight of pressure is heavy. They can have that crown because I never wanted Dad’s kingdom in the first place. But I do miss his approval and affection. Of the three of us, I favor Papa most, but we couldn’t be more different.

“Yes. I’m glad they’ve recognized your hard work and brilliance.” It’s the closest I’m going to get to a ‘job well done’ from him.

“Thanks, Papa. I need to catch up with Pierce and see what they’d like me to do this evening. I’ll see you later at dinner.” I can’t get away fast enough as I turn on my heel and leave them behind. 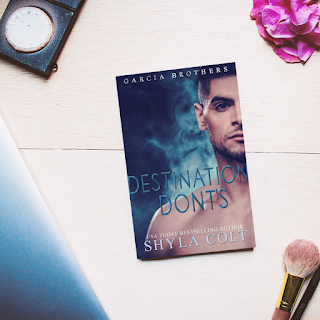 One Reply to “Cover Reveal: Destination Don’ts, by Shyla Colt”