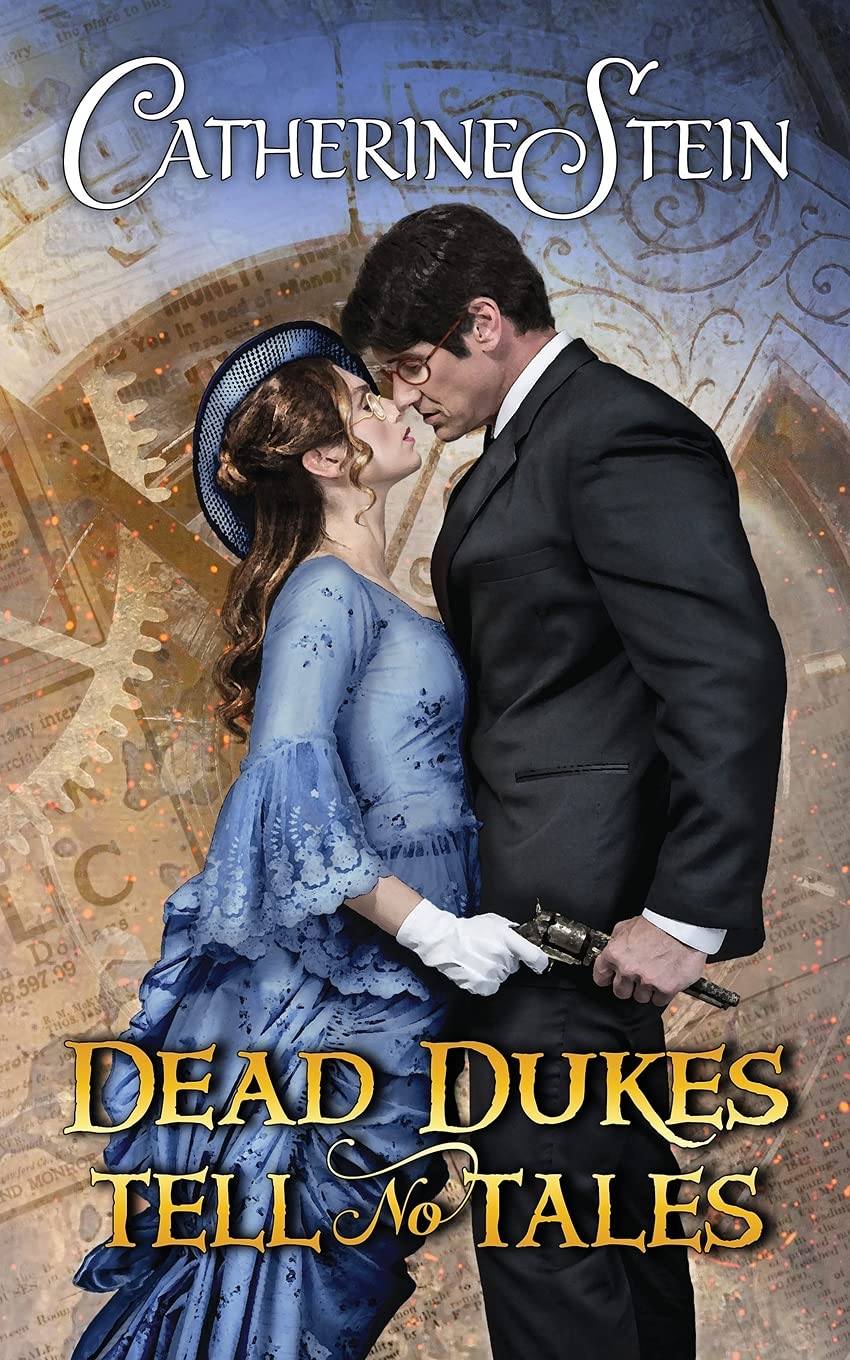 Airship pirates, mysterious inventions, and a treasure beyond compare? All in a duke’s work.

Chicago scrap metal mogul Clifford Kinsley has never encountered an obstacle he couldn’t dismantle. Until he inherits a dukedom burdened with mountains of debt, stifling rules, and people who want to ship his seven-year-old daughter off to boarding school. He’s stuck with the title for life. Which leaves only one solution: kill the duke. And for that, he’ll need the assistance of a professional.

Sabine Diebin, the infamous pirate captain La Capitaine, has one final treasure to find before she settles down to a well-deserved retirement. Unfortunately, the key to finding her prize is buried somewhere in the mess left behind by the late Duke of Hartleigh. To speed up her search, Sabine makes a deal with the oddly charming new duke-next-door. If he sorts through her clutter, she’ll help him disappear.

Working together, Cliff and Sabine uncover a trail of clues that sends them on a world-wide search for a potentially life-changing device. With their combined skills, they can dodge murderous enemies and unravel baffling messages, but they can’t deny their growing bond or the desire sparking between them. Pirates don’t have partners. But if they dare to open their hearts, they might discover that the greatest treasures of all can’t be buried. 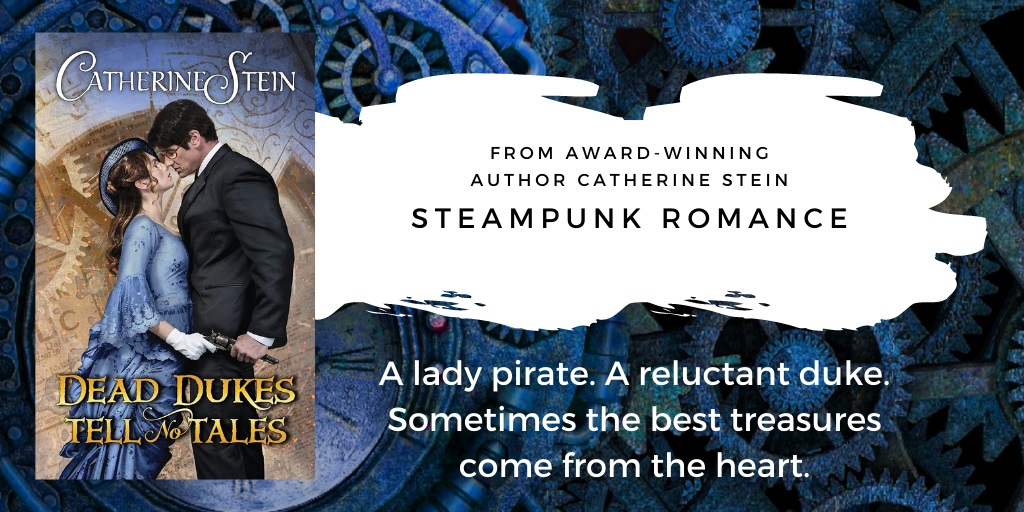 “The leftovers of the Mad Duke.” He huffed a little laugh.

“Yes. I understand you run a scrap collection business? Perhaps I could employ you to haul everything away.”

“I was in the recycling business.” His mouth tightened into a hard line. “Now, unfortunately, I’m a goddamned duke, if you’ll pardon my French.”

Sabine tried not to laugh. She really did. But he was so delightfully, blunt-spokenly American.

“Has your new title destroyed your ability to pluck valuable bits from the rubbish?”

He adjusted his spectacles, assessing her with a steady gaze. His eyes were an icy blue, like the glacial caves in the Alps—quiet, still, and eerily beautiful.

“Since we are neighbors, maybe you would like to lend your expertise and help me straighten out this mess of a house? As payment, you may keep what you wish of the saleable items. After I have taken any that are of interest to me, of course.”

Hartleigh folded his arms across his chest. “Why, may I ask, did you purchase this house and all the items in it if you didn’t want them?”

“I do want them. Or, rather, I want some of them. There are items in this collection, purchased long ago, that are of great interest to me, if only I can find them in the mess.”

“So you’re a collector yourself, then.”

She chuckled. “More of a treasure hunter.”

“You told him I was a treasure hunter?” Sabine asked.

“Oh, God.” Hartleigh put a hand to his temple. “I’m so sorry. Pirates are her new favorite thing. The trip across the ocean was very long, and we’d just read Treasure Island together…”

He leaned so far forward he rocked the piano bench onto the front two legs. “No, I must. I’m sure there’s some way I could have better explained that you don’t call your new neighbor a pirate, even if she does collect treasure, and…”

“But I am a pirate,” Sabine said. “Haven’t you heard of the infamous La Capitaine? I am she.”

Hartleigh gaped at her. “I, uh…” Before he could stammer a coherent word, the piano bench slipped, sending the peculiar new duke tumbling to the floor with a resounding crash. 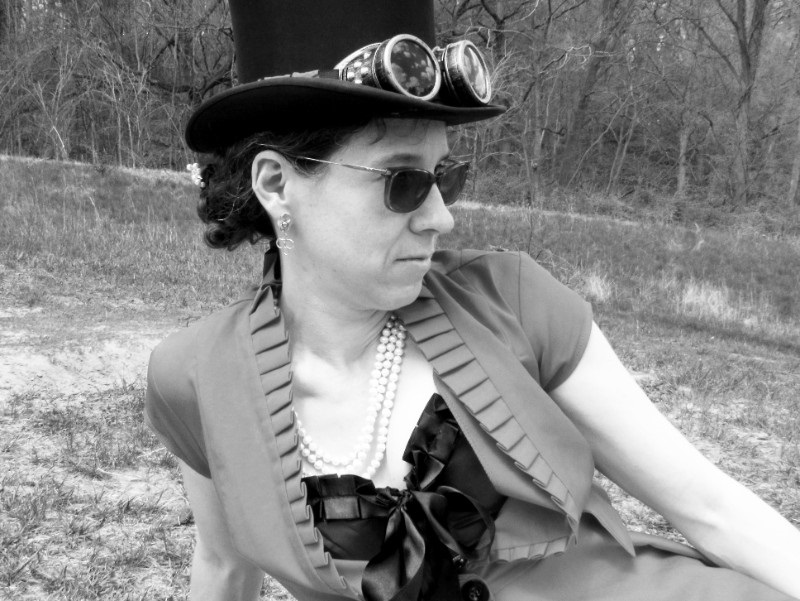 Catherine lives in Michigan with her husband and three rambunctious kids. She loves steampunk and Oxford commas, and can often be found dressed in Renaissance Festival clothing, drinking copious amounts of tea.