Today Tinia Montford and Rockstar Book Tours are revealing the cover for THE LAST MINUTE FIRST LADY, her new rom-com which releases December 22, 2022! Check out the awesome cover and enter the giveaway! 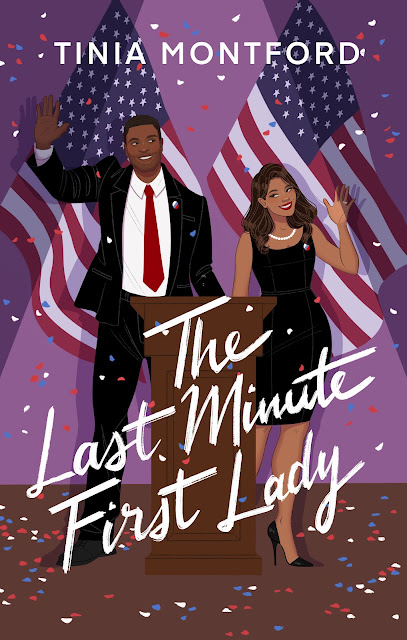 Cassian Anders will be the youngest governor in Illinois history… If he wins.

That’s all everyone seems to talk about these days. Jolie Coldwell isn’t one of them. As a journalist, her priorities comprise digging up dirt on crooked politicians and local cover-ups.
When her latest exposé on a congressman lands her in hot water, her days are reduced to covering the senior center’s casino night.

Unexpectedly, news breaks: the on-air investigative segment needs a replacement. This promotion advance could her career.

She needs a breaking story. She needs it now.

The road to office is ruthless compared to the courtroom. Without warning, Cassian Anders’ popularity rating falls, threatening his position on the ballot. He will do whatever it means to secure votes. Now, not only is he engaged, but he’s getting married to his non-existent fiancée…

He’s never relied on luck, but when a convenient but unorthodox wife falls into his lap? He makes her a deal.

He needs a wife. He needs it now.

Will Jolie and Cassian be able to fool the public long enough? Can she handle the public poking around in her past, one she would rather keep under wraps… Above all, can she be a model first lady or are they destined to be a scandal?

THE LAST-MINUTE FIRST LADY IS A STEAMY MARRIAGE OF CONVENIENCE ROMANCE. PERFECT FOR READERS WHO LOVE OUTRAGEOUS IN-LAWS, HONEYMOONS TO NAPA VALLEY, AND CROOKED POLITICIANS. THIS NOVEL CONTAINS CURSING AND SEX SCENES, AND INTENDED FOR AUDIENCES 18 YEARS AND OLDER.

“You wanna know why I am running for governor?” he began.
“I’ve sat. Watched. Defended in the courtroom, the very people this state is supposed to protect. I’ve been in the trenches with you all.” He pointed to the crowd. “I’ve seen the disadvantages in working-class neighborhoods compared to the elite on the Gold Coast and Millionaire’s Row. I’ve seen families struggling to make ends meet, and youth struggle to stay out of street violence.”

Cassian paused for a second.

“Everything we care about is under siege by Governor William Radcliffe.” The crowd booed. “Our very identities do not fit in the governor’s plan, nor will they ever. I grew up on the South Side of Chicago. Englewood. Chicago’s murder capital. I’ve experienced poverty and crime, and I know the beauty there. I see amazing potential if we were to invest in the people there, not ignore them like Governor Radcliffe has.”

A calm, collected feeling rolled over Cassian’s body, obliterating the nervousness he’d felt. The crowd watched him with anticipation. It thrilled him. Fueled him.

“Illinois is losing jobs and opportunities. Creative minds.
The fiber of our communities. If we continue to let Governor Radcliffe lead, there won’t be a state for us to call home.”

Cassian looked down in the crowd. He shouldn’t have noticed, but he did.

In the center of the room, he spotted a woman. A beautiful woman.
As they locked eyes, he recognized her. Jolie Coldwell. He couldn’t forget the fierce reporter.

He observed at her closely, his practiced speech faltering.
She wore a pure white, double-breasted blazer dress. From his position on stage, he could see it stopped mid-thigh, showing off the sexy, thick brown thighs. The dress wrapped around her curvy silhouette with decorative button details down the front that led up to her tasteful cleavage.

Jolie lifted her chin, meeting his gaze straight on, a small smirk on her lips. That’s when he realized he had stopped talking. Clearing his throat, he returned her steady gaze, and something intense flared through him.

“I’m not here to only make history. I’m here because I love the people of this state. I want to remind everyone We Are The Change.” 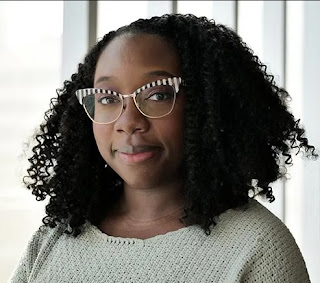 Tinia (TUH-NIA) Montford is a Pisces who’s a sap for romance, especially when there’s (tons of) kissing. Loves eighties sitcoms and will consume anything with chocolate. She graduated from the University of San Francisco with a degree in English and Graphic Design.

She is a world traveler having climbed a volcano in Nicaragua, scaled Angkor Wat in the blistering sun, and roamed the Acropolis of Athens. Oh, she also dabbles in short stories occasionally.