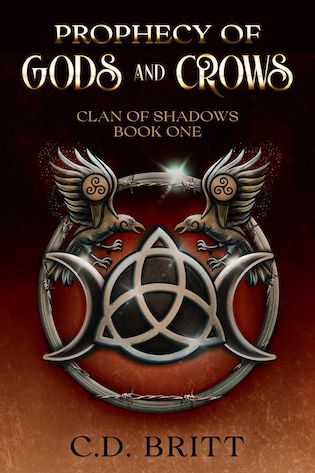 Welcome to Hell’s Half Acre.

Bryndis Kenneally is an anomaly, which is saying something when you live in a place called Hell.

Despite being born into a family of healers, she is unable to follow in their footsteps since disturbing visions overwhelm her with almost every human touch.

With few allies at her back, she keeps her head down… until she starts to see a man made of shadows, and a crow begins to track her every move.

Now, she can no longer pretend to be a normal woman among a town looking for witches to burn.

That is until a freak sandstorm brings more than she bargained for… and quite possibly her salvation.

Book one in the Clan of Shadows series, a dystopian paranormal romance series.

C.D. Britt began her writing journey when her husband told her she needed to use her excessive imagination to write stories as opposed to creating a daily narrative for him. Ever since she penned her first words, life has been a lot more peaceful for him.

She currently resides in Texas where she has yet to adapt to the heat. Her husband thrives in it, so unfortunately they will not be relocating to colder climates anytime soon.

Their two young children would honestly complain either way.

When she is not in her writing cave (hiding from the sun), she enjoys ignoring the world as much as her children will allow with a good book, music, and vast amounts of coffee (until it’s time for wine).

C.D. Britt is the author of Shadows and Vines and the upcoming book, Sirens and Leviathans.

Both books are part of the Reign of Goddesses series.