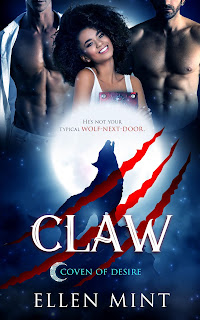 Layla didn’t count on a sex demon appearing in her living room. Nor did she expect to find she’s a witch, tasked with protecting the mortal realm. And now her friend, fellow nursing student and impossible crush could be a potential killer?
She’s silently lusted after Cal for a year, knowing a guy that hot, sweet, and kind wouldn’t look twice at her. All their flirting was innocent and went nowhere, until Ink—the incubus bound to her—ran into her life and bed. Next thing she knows, Cal’s growling at her while Ink flirts, and women are being ripped apart by wild animals. Couldn’t the murder monster mystery wait until after finals?
She wanted to be a nurse, not a paranormal investigator, but Layla has no choice. Apparently only witches can stop these creatures that she didn’t even know existed a month ago. But the deeper she digs, the more it looks like Cal’s deep in the middle of it all. How can she save her friend from the claws of a cult, keep her sex-craved demon happy and find a way to let both into her heart or bed? 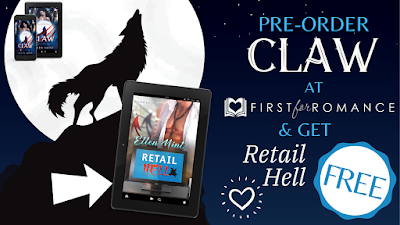 Everyone who buys a copy of Claw at First for Romance will receive the short story Retail Hell free at First For Romance.

Set between the events of Ink and Claw in the Coven of Desire series, Layla’s workday from hell is interrupted by her personal sex demon.

“Please,” I whispered, praying there was a single note of compassion remaining inside the animal.

The icy gaze darted behind me. “You almost fell,” he said, drawing me to find the stack of crates I’d nearly crashed onto.

I wished that reassured me, that I wasn’t still staring deep into the eyes of a potential crazed animal, but he didn’t release his hold on my face. Cal raised his other hand, the fingers extended as if he expected claws to be on them. The palm drifted closer, my heart thundering for fear of where it was heading. To pierce my ribcage? Pry out my heart? Rip off an arm?

When it settled on my hip, I felt a macabre sense of disappointment. Until Calvin, always sweet but distant Calvin, brushed the full pad of his palm over my ass. A deep rumble rolled from his chest, which kept rising higher.

“Let me leave,” I whispered.

That killed his growl, his head shooting up and the eyes opening in surprise. But as he circled his lips with his tongue—which I’d never noticed was so long before—Calvin flexed his hold on me.

Oh god! I stumbled backward, my hands flying to find anything to grab. One latched on to his forearm, the arm with the fingers attached to my face. I could dig my own claws in, see if that shook him off.

But I’d found his den, sussed out his secret. No chance he’d let me walk away now.

“Ah!” I gasped, my back striking the wall. A picture frame jabbed into me, but I wasn’t in a position to complain. Cal pressed closer, first almost shoving his chest into mine, then his hips. His hand remained clamped over my chin. I kept picturing it sliding down to my throat to cut off my air. But he didn’t move it even while leaning nearer until he grazed the edge of my jaw with his teeth.

Shit. My legs wouldn’t stop trembling, my body wanting to fall to the ground and scamper away. But not all of it. Even as I hung on to his arm, my fingers toyed with the hard muscle clinging to me. With every swipe of his hips, the undeniable surge in his pants grew.

“Layla.” Calvin whispered my name as though he recognized me from across the street. I turned to him and he plunged his famished mouth over mine. Inescapable heat pulsed through me, Cal’s lips a hard snarl aching to own me. But the longer he kissed me, the softer they became. Almost tender and gentle, he slipped his tongue into my mouth. I answered back with mine. My body hummed with anticipation, my mind pleading for more. For me to taste all of him.

Loss. It flooded my senses and I opened my eyes to watch Calvin break off the kiss. His hand slipped from my face, though the other remained cradling my ass. Slowly, he licked his lips, causing a smile to twist across them. But he shook it off and said in a ragged voice, “You can go.”

“What?” I lost all focus, my head whipping to the side to see he’d kissed me right next to the door. He’d brought me to the door.

Calvin pulled in a slow breath and his smile turned winsome. “You asked to leave.”

Yes. I needed to get out. He could be a murderer. Except he’d been here that night…literally chained up. He’d chained himself up? To keep others safe? My heart fluttered at the idea and Calvin slunk back. He swiped at his neck like it was tough for him to breathe after our kiss. It tugged the sweater down, revealing a handful of blond chest hair begging to be freed.

I fisted his hair, tugging his lips to mine while flattening my body against his. Cal grabbed on to my shirt and lifted it. But I wouldn’t stop kissing him, my lips craving his, my hands needing to run the length of his terrain. I worked under his sweater and swept my palm up his stomach. Abs, a tuft of soft hair, and…

Cal grabbed my arms by the wrists and raised them above my head. Our kiss broke, leaving me staring across the narrow gap into his burning ice eyes. He pulled in a breath, straining the knit weave of his sweater across his flexing muscles.

Locking my wrists together in one palm, he yanked my shirt up to my elbows. Only that blur of cotton broke our stare. Electricity crackled in the space between us. I watched Cal pull in air in anticipation of a marathon.

He unleashed my wrists, letting them drop to my sides as my shirt flew into the circular staircase. The energy was building, every micro-shift in my body zapping a strike from me to him, or vice versa. I felt them not as pain, but a shiver across my skin that I’d never known before.

“Gonna show me the goods, wolfman?” I asked, placing a hand to my hip. 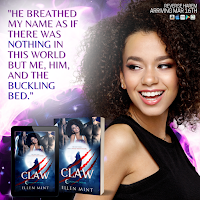 Ellen Mint adores the adorkable heroes who charm with their shy smiles and heroines that pack a punch. She has a needy black lab named after Granny Weatherwax from Discworld. Sadly, her dog is more of a Magrat.

When she’s not writing imposing incubi or saucy aliens, she does silly things like make a tiny library full of her books. Her background is in genetics and she married a food scientist so the two of them nerd out over things like gut bacteria. She also loves gaming, particularly some of the bigger RPG titles. If you want to get her talking for hours, just bring up Dragon Age.

One lucky reader will win an amazing gift basket of goodies perfect
for any witchy wolf-lover.
Worth over $60, to enter please visit
https://ellenmint.blog/claw/claw-werewolf-giveaway/ 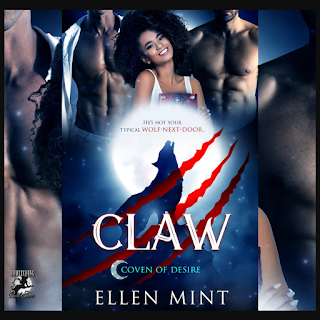