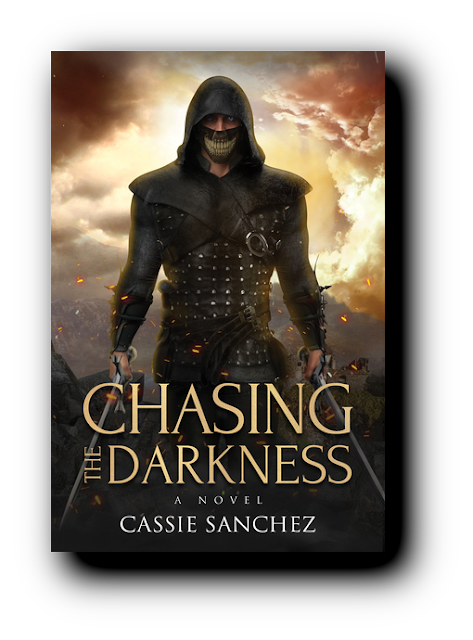 An assassin, obsessed with revenge, undergoes a procedure giving him magic and discovers his life and purpose were built on lies and has to decide which path he’ll choose; the one of vengeance or the one of redemption.…

Pain is inescapable.
Suffering is a choice.

Azrael, the Angel of Death, knows pain. The deaths of his mother and sister, as well as his harsh experiences in the Watch Guard at age twelve, have brutally shaped him into the most feared assassin in all of Pandaren. Azrael’s role as a Hunter requires him to search for those with magic, called Spectrals, which he is happy to do. Hunting allows him to pursue his true goal—exacting revenge on the Fire Spectral who altered the course of his life.

Azrael’s obsession with revenge and power leads him to undergo an experimental procedure that gives him magic, but when this procedure has unexpected and dangerous side effects, he becomes a liability to the Hunters and the Watch Guard. Rescued by the people he has sworn to eliminate, Azrael finds himself questioning everything he once believed as years of secrets and lies are exposed. His very nature is challenged as he battles unfamiliar emotions and navigates relationships that contradict the heart of a killer.

Can the Angel of Death have a conscience? Can Azrael?

Chasing the Darkness is an escape to a land of magic, sword fights, and love, with memorable characters who must face the darkness within and journey down a path of destruction or redemption. 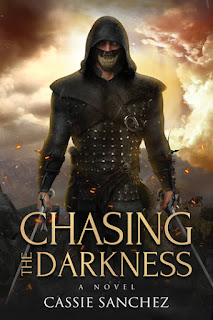 Torches flickered and the thump of boots echoed through the hallway as Commander Drexus Zoldac of the Watch Guard strode down the corridor toward the war room, followed by his soldiers. Castle guards and servants flattened themselves against the wall, their expressions a mixture of fear and grief. Hours before, the people of Pandaren had celebrated their victory in the war against the Vastanes. Cheers of celebration, though, became wails of sorrow as the palace and the city of Orilyon crumbled into chaos.

“How did he get in?” Drexus asked.

Drexus stopped and slowly turned toward the guard, who glanced up at him and winced. “Work faster,” he warned.

Drexus continued down the corridor, clenching his jaw, trying to rein in his anger. Two soldiers saluted as he pushed open the heavy wooden doors into a room buzzing with activity. Council members argued near the fireplace and his generals surrounded a large oval table studying a map of Pandaren. They stood to attention, saluting as Drexus approached. Kenneth Brenet, head advisor to the king, sat in a corner holding his head.

One of the council members hurried over. “Is it true? Is King Valeri dead?”

“It’s true,” Drexus said. He ignored the questions yelled at him and walked across the room to put a hand on Kenneth’s bony shoulder. “They need you, now more than ever.”

Kenneth nodded, set his shoulders, and approached the center of the room. Drexus stood at his side, arms crossed.

“Attention, please,” Kenneth said, silencing the room. “As many of you suspect, the king is dead, murdered in his study this evening.”

“How?” someone called out.

Kenneth looked up at Drexus, who inhaled, resting his sizable hands on the table as he regarded each council member, noble, and general. “An Air Spectral killed King Valeri.”

Gasps and shouts of anger reverberated off the stone walls.

“I thought the Spectrals were on our side,” one of the council members said.

Drexus fisted his hands. “So did we.”

“What do we know about the Spectrals?” Kenneth asked.

General Charlys stepped forward, her eyes darting to Drexus. “There are two main types of magic, physical and mental. A Spectral with physical magic can either control an element or is an Amp.”

“What are Amps?” one of the nobles asked, nearing the table.

“Amps, or Amplifiers, have unnatural speed and strength,” the general said. “The Mentals are a little trickier, but we’ve determined there are five types: Shields, Healers, Vaulters, Trackers, and Psyches.”

“Psyches?” Kenneth looked from the general to Drexus.

“They can move objects with their minds,” Drexus said.

“How do you have this information?”

“When the Spectrals joined forces with the Watch Guard, I assigned General Charlys to obtain as much information about them as possible, just in case.”

“With that kind of power?” a councilman said. “How are we going to defend ourselves? Naturals can’t fight against magic.”

Drexus’s eye twitched at the whine in the man’s voice. “I’m currently working on something that will neutralize their power. But first, we need strong leadership. I think Kenneth Brenet should rule as steward until the council deems it unnecessary.”

“What about Queen Valeri?” one of them asked.

Drexus refrained from rolling his eyes. “She’s grieving the loss of her husband, and with her diminished health, we cannot expect her to take the throne.” He sensed a shift in the room as men and women nodded their heads—a shift in his favor. “Who supports Kenneth Brenet becoming steward of Pandaren?”

Kenneth stared at the men and women surrounding the war table. “This is an honor. I can never measure up to our great king, but I will do my best. And my first act as steward is to put into law that all Spectrals will identify themselves and their powers. We have to know who they are and what they can do.”

The room bristled with fear.

“All in favor?” Drexus said.

Kenneth turned to Drexus. “Whatever you’re working on, get it completed as soon as possible. In the meantime, our priority is to defend the kingdom.”

Drexus led Kenneth away from the table. “Do I have your support to do whatever is necessary?” he asked.

The thin man stared up at him with wary eyes and nodded.

Drexus kept his expression blank.
“I’d like permission to create an elite group of soldiers specifically trained to fight the Spectrals.”

“What do you propose?”

“Hunters.” Drexus glanced over his shoulder, savoring the warmth of victory radiating through him. “Lethal assassins who will ensure the Spectrals comply with our new laws.”

The steward held Drexus’s gaze.
“Fortify our army, Drexus. And train your assassins. Create a force that will breed fear by the very mention of their name.” 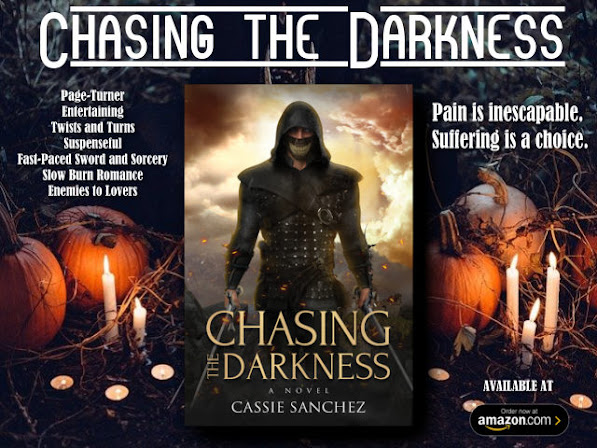 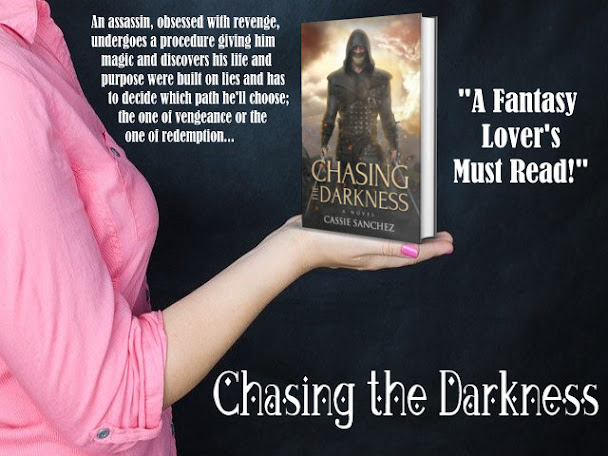 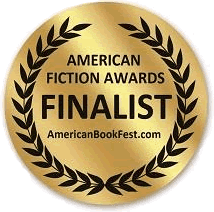 My younger son, Chase, challenged me to write a book since I loved reading so much. As a retired stay-at-home mom with kids going off to college, I questioned my identity and purpose in life. After attending a creative writing class, I fell in love with writing and ferociously started learning the craft. I finally had something that was all mine and got me out of bed in the morning.

How Chasing the Darkness came to be was thanks again to my kids, who were playing a video game. One of the characters grabbed my attention and the creative bug smacked me in the head. I sat down and wrote a scene that became chapter four. From there, the story emerged.

2. What, if anything, did you learn when writing the book?
That writing a book is stinking hard. I bought how-to books, joined webinars, took classes, even became a member of a writer’s guild to learn the craft. Even though I’ve read a ton of fiction, knowing how to develop characters, plot, and setting was completely new and more challenging than I had originally thought. Also, I have a love-hate relationship with commas.

3. What surprised you the most in writing it?
I discovered that writing dialogue is my sweet spot. That’s how many of my scenes developed was with characters arguing in my head (sometimes out loud). 😉
I also found that I’m pretty good at writing fighting scenes. Probably because I watch a lot of action movies with my sons. Yep, I’m that mom.

4. If it’s not a spoiler, what does the title mean?
My protagonist is an assassin, your anti-hero type. But to make him more vulnerable, or more human, I had him cherishing each sunrise. In the story, he and his mother would watch the sunrise together and she would say, “here it comes, the light chasing away the darkness.”

5. Were any of the characters inspired by real people? If so, do they know?
Some of my characters have a few of my personality traits. For example, Azrael has some anger management issues and so do I. Another character is a tad snarky, which is also me.
Some character traits were inspired by movies or books, like Dumbledore from Harry Potter or Han Solo from Star Wars. I’m a huge movie fan as well. You just never know when inspiration will strike or from where.

6. Do you consider the book to have a lesson or moral?
Yes. When writing, the themes I kept coming back to were redemption and forgiveness. They are woven throughout the pages of CTD.

7. What is your favorite part of the book?
One of my favorite chapters is chapter 13. I don’t want to give too much away, but it’s a scene that starts to shift the relationship between Azrael and Kenz.

8. Which character was most challenging to create? Why?
I’d say Azrael as he’s a man and I’m a woman. I had to make sure he didn’t react or say things like I necessarily would. Plus, Azrael, as the MC, had to have the most change and growth. I needed that to happen in a realistic way.

9. What are your immediate future plans?
I’m currently working on book 2 as CTD is a trilogy. 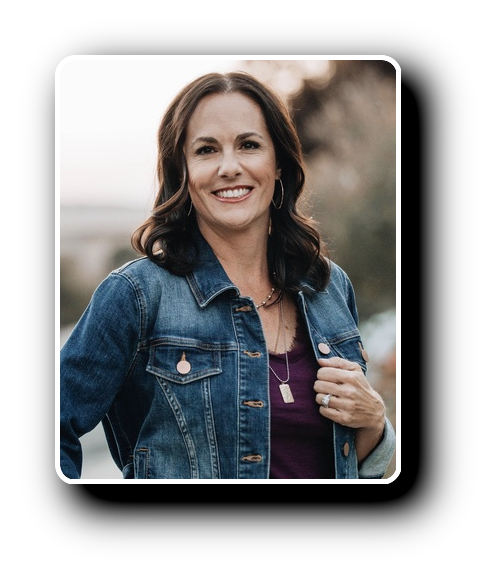 Growing up, Cassie Sanchez always wanted superpowers and to be a warrior princess fighting alongside unlikely heroes. Suffice it to say, she lost herself in books, from fantasy to sci-fi to a suspenseful romance. Currently, Cassie lives in the southwest with her husband, Louie, while pestering her two adult men-children. She can usually be found drinking too much coffee while working in her office with her dogs warming her feet. When she isn’t writing about magic and sword fights, she enjoys golf, spending time with friends, or partaking in a satisfying nap.

Her latest book is Chasing the Darkness. 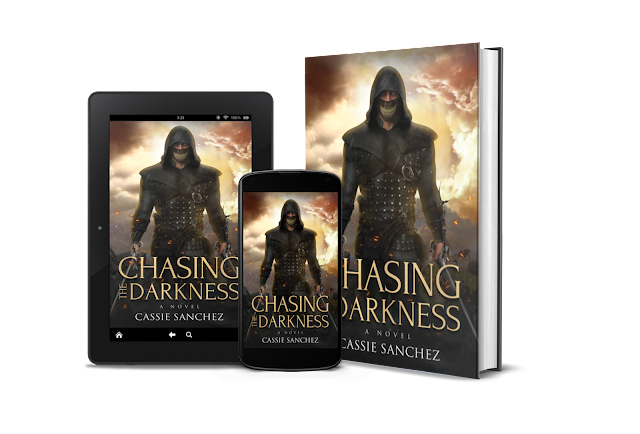