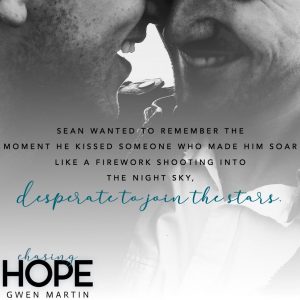 Loss chased him away, hope brought him love

Sean is only twenty-seven, but he’s already lost everything that gave him life. On the verge of losing hope for a future, he moves to a town where no one knows about him, the death of his child, or his failed marriage; but when his nightmares and his guilt follow him without the pitying glares, he realizes he can’t move forward on his own.

Jonah has worked tirelessly to keep his father’s memory alive and be a fixture in the small town he grew up in. Now, nearing forty, his dreams have been long forgotten to keep everyone else’s alive, and he doesn’t know how to reclaim his life as his own without losing his last connection to his father.

But when the two men’s lives collide, they’re forced to confront their grief and accept that there can be life and hope after loss—if you’re willing to chase it.

Chasing Hope is a 68k small-town, second chance at love, M/M Romance. There are subject matters in this book that may act as triggers for some. Readers are invited to check out the complete trigger warning on the copyright page, which can be viewed by clicking on the “Look Inside” preview or by downloading the sample. These triggers contain spoilers for the book. 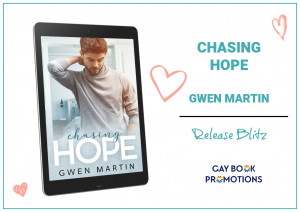 “Well, don’t ever do what I did and sleep with your best friend’s brother.” Jonah rubbed the back of his neck, color tinting his cheeks. “I said that wrong. There’s no ill will or anything. It didn’t last long.”

When Sean spoke, his voice came out hoarse and shaky. “I’m sorry.”

Jonah waved his hand. “Eh, it’s not a big deal. It was a long time ago, and we’re still super close. Candice worries I’ll never date again but dating at 37 is far harder than when you’re in your twenties.”

Sean laughed. “Oh really? Because I’m 27 and I can say that having been married and divorced by the time I was 26 isn’t exactly great dinner date conversation.”

Jonah shifted in his seat, resting his arm along the back of the couch. His hand grazed over Sean’s shoulder, his eyes watching the pattern they traced. “Well, that’s a shame on their part. They’re definitely missing out.”

Sean’s entire body was vibrating, and the muscles in his legs quaking. He didn’t know what he was doing, he didn’t know if he could confess the truth of his sexuality again. Sean had already tried twice, and both times had failed miserably.

Sean had once gone bungee jumping with Parker over the Colossus Bridge in Italy. He didn’t know what he was doing, but the massive expanse of green was so vivid it looked like a photograph. The man who had geared him up spoke broken English and said with a thick Italian accent, “You fly. Be free. Nowhere else but here.”

Sean wanted to take that leap again. Wanted to be free. Wanted to fly.

He leaned over and kissed Jonah.

It wasn’t the best kiss. If anything, judging by Sean’s history of kissing, it was embarrassingly awful. He was a little off center from Jonah’s mouth, and Sean’s lips slid over to the corner. At the same time, he lingered a second too long, and Jonah gasped in surprise, causing Sean’s tongue to slide under Jonah’s bottom lip.

He pulled back, his face burning. Jonah’s hand lifted to his lips, eyes round with shock. Sean couldn’t control his breathing, his hands balling into fists. He licked his lips again, eager to taste Jonah on his tongue. Jonah’s eyes trailed down to Sean’s mouth and stayed there for a protracted beat.

“I’m not straight,” Sean said, blurting the words a bit louder than intended. The rest tumbled out, glued together, sticky and rushed. “I tried to tell you before, but I messed up and I couldn’t—I couldn’t—I mean, I didn’t want to—”

Jonah pressed a finger to Sean’s lips, silencing him. His eyes appeared bluer in the dimming late afternoon, his hair framing his sharp jawline. Sean’s breath came out in ragged huffs as Jonah traced his fingertips along Sean’s chin, over his jaw, and around his temple. He combed those same fingers through Sean’s hair, and Sean couldn’t help but let his eyes flutter shut, lean into the touch.

“When I dated Lee, we didn’t tell anyone because I was worried about Candice finding out about her brother and best friend hooking up,” Jonah said, his voice quiet but even.

Sean tried to listen, tried to pay attention, but it was hard with Jonah’s dull nails scraping along his scalp. He shivered, biting the inside of his cheek hard.

Jonah drew closer, his other hand resting on Sean’s hip. “In the end we realized it wasn’t meant to be. We decided we were better off as friends, and a few months later he started dating the man who is now his husband. They’re better together than we ever would’ve been.”

Jonah’s breath ghosted over Sean’s mouth as he whispered, “There’s been no one since.”

Sean breathed hard through his nose when Jonah’s hand cupped around the back of his neck. “No one?”

“Well, there is someone,” Jonah murmured, low and rumbly.

“Ye-yeah?” Sean whispered. His eyes remained closed, too scared to open them and see how Jonah’s eyes looked. He imagined they were full of heat and as captivating as a clear summer sky. Breathing became difficult, and his heartbeat ramped up to a gallop.

“Yeah,” Jonah said, his voice breathy. “I really want to kiss you. Is that okay?” Jonah whispered.

The huskiness of his voice swirled around Sean like a sharp wind, overwhelming and shocking. He gripped Jonah’s t-shirt and pulled him closer.

“Yes,” Sean said. He wanted to sound confident and sure, but instead his voice came out raw and desperate. The next word slipped between his lips on its own accord. “Please.”

Gwen Martin grew up in Florida where the sun was always shining, the humidity was high, and Disney was just a hop skip away. She currently lives in Knoxville, Tennessee to experience seasons and be closer to the mountains. When she’s not trying to write one of her million story ideas, she’s usually hanging out with her husband and four cats.

​Gwen first started writing at a young age, coming up with stories in class instead of paying attention to the math lesson. Since then she has been exploring her love of writing in various fan communities where she has learned how to cultivate character development and romantic interactions.

​She has a strong love affair with cold brew coffee, black cats, and nerding out in various fandoms. When she’s not writing, she’s reading everything she can get her hands on, listening to a lot of lo-fi and making playlists, chilling with her four gatos and obsessing about Pusheen. Because it’s always about Pusheen.