Series Themes: the world is fragile, short-term decisions have long-term consequences, gifts are given for a reason

This is book #1 in the series. The romance ends on a HFN. The main story arc continues across all three books, and Tenzen and Rakurai will get their HEA at the end of book #3. 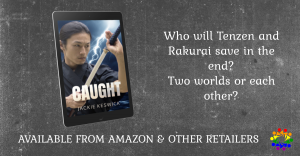 Rakurai hunts demons. He doesn’t consort with gods. Until he meets Tenzen.

Tenzen cares for souls. He despises the callous, self-absorbed Yuvine. Until he meets Rakurai.

A rescue and a sacrifice make a death god and a hunter fall in love, but a life of bliss is not on the cards. Someone is disturbing the balance of magic, leaving two worlds in danger. And while desire draws Rakurai and Tenzen together, duty, assassins, and clan politics keep them apart.

Who will Tenzen and Rakurai save in the end? Two worlds or each other?

Caught starts a new mm paranormal romance series, A Balance of Magic, featuring mortals and immortals from both sides of the veil, old promises, new revelations, and a bloody fight between love and duty. It is the first book of a trilogy and ends with a HFN. The characters will get their HEA in the final book.

He walked through the mists, gaze scanning the trees and bushes lining the path. Judging by the colour of the leaves and the bounty of fruit, the seasons still aligned on both sides of the veil, though the time of day did not. He’d left the human realm in the late afternoon, yet here it appeared to be early morning. And something—or someone—called to him.

There were no words, just a powerful tug on his awareness. A tug that made him want to follow the path, walk faster, run—

The tug eased a fraction, but didn’t disappear.

“Who are you and what do you want?” The trees swallowed Rakurai’s question and returned no answer. Could this be the rafeet’s doing? Did it have the power to make Rakurai rush headlong into a trap? He’d never read of such a skill.

He took a careful step forward.

The tug eased a little more.

He took a step back the way he’d come.

“Understood,” he said, irony strong in his voice. He had to find the rafeet, but he could spare some time to see what other creature had need of him.

He followed the path, watching the bark of the trees, the grass, and the rushes underfoot for signs of the rafeet’s passing. There weren’t any now. The demon wouldn’t hunt on its own turf, and it would take care not to lead a hunter to its lair.

It grew warmer as Rakurai walked, and the sun had passed its zenith when he topped a ridge overlooking a manor house set in a neat pattern of fields. The dwelling looked much like his own: three wings of rooms arranged around a courtyard, dark wooden beams on foundations of rough stone, with a veranda edging each wing, and shoji screens hiding the interior from view.

Servants passed back and forth, and Rakurai saw people tending the fields. He thought about approaching openly, like a traveller looking for a place to rest, but finally dismissed the idea. Instead, he slept the afternoon away, up on his ridge, then slid through the fields under cover of dusk, found a sheltered spot beside the house, and waited for full darkness.

The statue in the courtyard had drawn him here, he realised as he came closer. Shaped like a tall man with long flowing hair, it stood on a plinth surrounded by water. The artist had caught each swirl of robes and hair with precision, as if the figure walked in a light breeze and was just about to take the next step. It was an exceptional work, worthy of an emperor’s court, and Rakurai wondered who had stolen it, and why.

He waited until a cloud dimmed the moonlight, then crossed the courtyard to get as close to the sculpture as he could.

The statue regarded him from glowing violet eyes, and the moment their gazes connected a voice, deep and commanding, rang in Rakurai’s mind.

Get me out of here!

Rakurai recoiled so hard he almost landed on his arse. He’d not had another’s voice in his mind since Naomi’s death and the sudden command—and command it had been—came as a shock. He wrapped himself in mist, hoping to hide his hasty movements, and heard a chuckle.

I can still see you, Yuvine.

I wasn’t hiding from you, Rakurai thought, using the same pathways he’d have used to talk to Naomi. It didn’t feel as strange as he’d expected.

You don’t need to try so hard, either. I’m not deaf.

Can’t you tell? The sculpture shot back, its eyes flashing violet.

Only death gods, Shinigami, had violet eyes. Rakurai had never met a death god. Or thought that they stood frozen on plinths, surrounded by water.

And then it all came together.

Yes. The voice held so much sorrow that tears gathered in the corners of Rakurai’s eyes. It caught me as I was returning from a soul collection.

Rakurai could fill in the rest for himself. If the Shinigami had gathered souls that had died in fear and pain, he’d have appeared like a walking banquet to the rafeet. It wants the souls.

It will not have them, the god said. Even if it keeps me trapped here for the rest of my years. Are you hunting the rafeet?

Then you can help me escape this prison and we can defeat it together.

Why would I do that?

Because if you try it alone, you will fail. This rafeet isn’t like the others.

Rakurai hesitated. It was common knowledge that Shinigami valued truth and honour above all other traits. Despite that, his teachers had warned him to mistrust the gods and never to do their bidding.

Help me out of this trap and I will grant you a boon of your choosing, the Shinigami offered as if he had heard Rakurai’s thoughts.

Rakurai stared into the glowing violet eyes and recalled the hint of mirth when the god had first spoken to him. Any being capable of mirth while caught in a rafeet’s trap deserved his respect and his help. He drew a deep breath. I am Yamakage Rakurai, hunter for the Custodia, he offered. And gathered all his courage. Will you honour me with your name?

The impression of a smile came to him first, comforting like a cool wash of summer rain on parched ground. Then the Shinigami’s chuckle sent shivers rippling over Rakurai’s skin. You are a brave man, Yamakage Rakurai, to trust me with your name. Such bravery shall not go unrewarded. Again, Rakurai felt the smile. My name is Tenzen.

Jackie Keswick was born behind the Iron Curtain with itchy feet, a bent for rocks and a recurring dream of stepping off a bus in the middle of nowhere to go home. She’s worked in a hospital and as the only girl with 52 men on an oil rig, spent a winter in Moscow and a summer in Iceland and finally settled in the country of her dreams with her dream team: a husband, a cat, a tandem, a hammer and a laptop.

Jackie loves unexpected reunions and second chances, and men who write their own rules. She blogs about English history and food, has a thing for green eyes, and is a great believer in making up soundtracks for everything, including her characters and the cat.

And she still hasn’t found the place where the bus stops.

For questions and comments, not restricted to green eyes, bus stops or recipes for traditional English food, you can find Jackie Keswick in all the usual places:

Enter the Rafflecopter Giveaway for a chance to win a 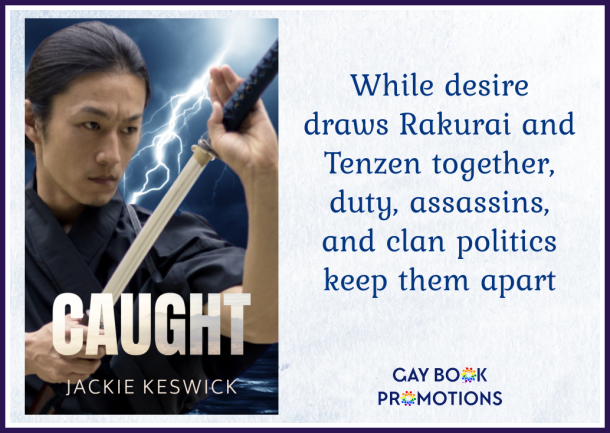