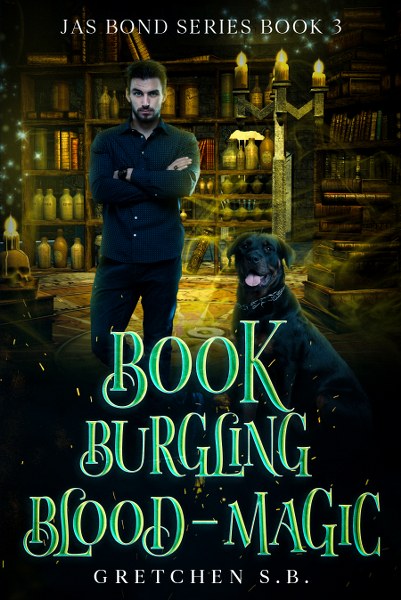 The last thing I need, is the book everybody wants…

When a volume eight of Geysers Journals falls into my lap I’m left with a conundrum. Do I hold onto it and try to get the most money out of it I possibly can, shoring up my finances for at least a year? Or do I get rid of it as quickly as possible in an effort to avoid any more attempts on my life? To me, the choice is obvious. But what am I supposed to do when the buyer isn’t who they seem, and I end up getting stiffed? Then I get a frantic call about my dog. Cheat me out of a heck of a lot of money and I’ll angrily grumble but come after Bailey and you and I have a problem.

Some books bring a heck of a lot of trouble. See what’s in store in Book Burgling Blood-Magic.

The two nearby stores owned by supernaturals are broken into. The Fix ‘n’ Find, my store, is not. What I have instead are suspicious magical handprints on the front windows. Combine that with a weird set of glasses that let the wearer see every type of magic and we have a serious conundrum. Luckily, my ex-fiancé Violetta, is a powerful witch and willing to help me figure out what could possibly be going on.

Follow the tour HERE for special content and a giveaway!
$10 Amazon giftcard,
ebook of Spectacle Stealing Supernatural
– 1 winner each!
a Rafflecopter giveaway