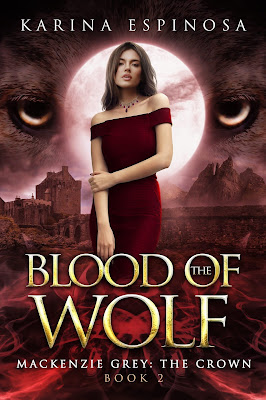 Blurb:
Blood is thicker than water.

With the bombshell that Ophelia dropped on the night of the mating ceremony, Mackenzie is struggling with her inner self. Everything she once believed her life would be, just got turned upside down—and not by choice.

Fae magic runs through her blood and the consequences are dire. The demon wants what Mackenzie has because of her blood and will stop at nothing until he gets it … even if he has to kill her in the process. But the question is, why does he want it so badly? And why is he killing so many innocent lycan in his quest?

To get these answers, Mackenzie will ally herself with those who once were her enemy. But she’s making a dangerous choice, because at any moment, they’re right on the sidelines ready to stab her in the back.

Her blood is the key. Can Kenz survive a battle against Abaddon? Or will the ones closest to her be the ones to take her down?

Karina Espinosa is the Urban Fantasy Author of the Mackenzie Grey novels and The Last Valkyrie series. An avid reader throughout her life, the world of Urban Fantasy easily became an obsession that turned into a passion for writing strong leading characters with authentic story arcs. When she isn’t writing badass heroines, you can find this self-proclaimed nomad in her South Florida home binge watching the latest series on Netflix or traveling far and wide for the latest inspiration for her books. Follow her on social media!
Author Links:
Web | Amazon | Goodreads | Facebook | Twitter
Reader Group | Instagram | Bookbub
START THE SERIES TODAY!

One Reply to “Cover Reveal: Blood of the Wolf, by Karina Espinosa”