Trope/s: Arranged marriage, fish out of water, falling in love with the wrong brother, magical mpreg

Ashley Mostrich gets one heck of a birthday surprise when the guy he brought home for the night turns out to be the twin brother of the prince he didn’t know he was supposed to marry. Unbeknownst to Ashley, his grandpa made a deal with a jinn and promised him off to the royal family before he was even born.

Zamir is the heir to the mystical kingdom of Palmyra and promises he will love Ashley in time, while his younger brother, Zaire, is trying to get into Ashley ‘s bed again. Ashley wants to be a faithful fiancé to Zamir, but he cannot deny the powerful chemistry he feels with Zaire. Additional jealousy flares when Ashley discovers that Zamir’s heart already belongs to another, but the pressure for the wedding is on because the future of the Palmyran people hinges on a royal union magically producing an heir.

Once Ashley realizes that Zaire’s feelings for him might be more than physical, he finds himself falling in love with the wrong brother and risking the fate of the entire kingdom. It’ll take a miracle—or one very powerful wish—for everyone to have a happy ending.

“Why does everyone keep calling me ‘savior’?”

“You don’t know? About the prophecy?” Zaire questioned slowly.

Zaire made a sour face, mumbling a few soft curses before clearing his throat. “My brother is truly an idiot. Come with me,” he said, taking Ashley’s arm and guiding him back toward where the little girl was.

People were bringing her little trinkets and baubles, receiving a slice of the cake from her in exchange. She had a crown of flowers in her hair, well dressed, and seemed to be of some importance despite her youth.

Ashley watched for a few moments. “Who is that?”

“That is Lady Alana,” Zaire replied, waiting for the name to settle in Ashley’s brain.

“Yes,” Zaire said, something sad in his voice. “Our people are dying, Ashley. Slowly but surely, jinn are fading away. Every generation has gotten smaller and smaller, and there hasn’t been a new jinn child born in over thirty years.”

“Thirty years… Alana was the last one?”

“Yes. Even with all our proper breeding and perfect little arranged marriages, every mating ritual since her birth has failed. But there’s a prophecy, you see, that a royal wedding will bless the entire kingdom with an entire new generation of children.”

“Wait a damn second, that little girl is freakin’ thirty?”

“Yes,” Zaire huffed impatiently. “We don’t age as humans do. Now, do you understand why you are so important?”

“Everyone actually believes that me getting knocked up by your brother or me knocking him up is the future of your entire race?”

“Mmm, pretty much. It’ll probably be you getting knocked up, to be honest. But you know, no pressure!”

“Fuck,” Ashley mumbled, rubbing a hand over his face and chugging his drink.

“My brother knows what’s at stake,” Zaire said gently, a tone meant to be comforting. “He will make amends for his behavior, I know it.”

“Do you believe the prophecy?”

Zaire’s brows furrowed, and he glanced down at his mug as he thought over the question. He took a small sip before he said, “I believe that other people believe it’s true. I’ve never been much for fate or destiny. I much prefer the idea that I’m in control of my own life.”

“You realize this makes what you did even more screwed up?”

“If the prophecy is real, you risked the future of your race just to piss off your brother.”

“First of all,” Zaire drawled, wagging his finger, “I never planned for ‘what we did’ to go that far. I truly had no intentions of having sex with you. I was expecting to find a blushing virgin, not an insatiable bedroom hellcat—”

“A bedroom what now?”

“And second of all,” Zaire went on with a smirk, “it was quite impossible to think about the good of my people once I had tasted your gorgeous flesh.”

“Zaire!” Ashley protested, whipping around to see if anyone was listening. He stared back at Zaire, and he suddenly realized that although he could hear his voice, his lips were not moving.

“When you were screaming my name, all I thought about was wanting to hear that sweet sound as many times as I possibly could.”

Ashley gulped, blood creeping up into his cheeks as he stammered, “That’s… that’s, uhm, that was very s-selfish of you.”

“I know,” Zaire said out loud with a smug little smile. “I’m a very selfish person. At times, quite envious as well.”

“Seeing my brother get all the things I want for myself has become a bit tiresome,” Zaire replied, his lips not moving again, and yet his voice was fully in Ashley’s ear as he stepped into his space. “Not very fair at all.”

“How, how are you doing that?” Ashley hissed, instinctively backing away.

“The talking without talking.”

“Fine! Stop not saying those things!” 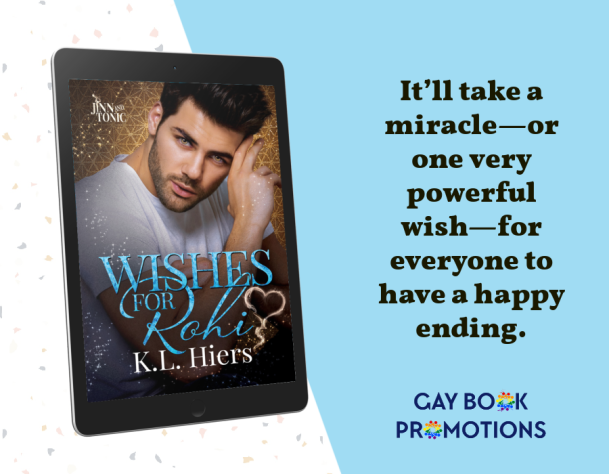 One Reply to “Book Blitz & Excerpt: Wishes for Rohi + Giveaway”