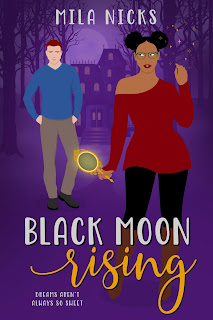 Selene Blackstone is finally getting the chance to explore like she’s always dreamed. Once stuck in her hometown Brimrock, with the curse broken, she’s a free witch. Together in their trusty caravan Ghost, she and her paranormal investigator boyfriend Aiden O’Hare are traveling cross-country filming for their show, Paranormal Hunters.

Their first case brings them to the colonial town Maresburg, Virginia, where the Mhoon Hotel is said to be one of the most haunted in the country. At the century-old hotel, guests experience nightmares so frightening they’re heart-stopping—literally. Selene and Aiden only have a couple of weeks to figure out if this case is a scammer at work, or if there’s some truth to what they say: dreams do come true. And so do nightmares.

The February drizzle couldn’t bring the mood down if it tried. Selene hopped off the tour bus and gasped at what awaited her. For as dull and damp as the afternoon was, color now bloomed on the scene in ivory whites and blush pinks. It would be another few weeks before the cherry blossoms reached the full extent of their beauty, but the flowery trees around the Tidal Basin were breathtaking regardless.

Washington, DC, was everything she had imagined.

She fumbled in her leather book bag for her Polaroid camera, snapping her first of many photos to come. Aiden made fun of her for carrying around a camera from the nineties, but it worked as well as any camera on a smartphone. Plus, it had once belonged to Mom.

“And I get my photos printed right into my hand,” Selene had boasted to him. “Does your fancy iPhone camera do that?”

Her mouth fell open in a smile as she clicked away at the historic scenery. She had nabbed some good shots of the Tidal Basin with the Jefferson Memorial in the background, and even some artsy ones of her fellow tourists strolling along the water banks. Finally she had an excuse to take up scrapbooking. Photos of places like the Brimrock library and park grounds weren’t too exciting after twenty-six years.

The drizzle continued to fall, showing no signs of slowing down anytime soon. One particularly pesky drop plunked down onto the slope of Selene’s nose, a cold and slippery bead that dangled off the round tip. She ignored it, along with the rest of the sprinkles, clicking away with zealous tourist abandon.

A black canopy floated above her head, blocking out any more drizzle. She paused, lifting her gaze from behind the camera and turning it upward. Aiden stood half a step behind her, holding his giant umbrella over them. He smiled when she met his glowing hazel eyes. They had changed colors, now a green one or two tones off from emerald.

Warmth quickly radiated in her chest that had nothing to do with the fuzzy sweater she wore and everything to do with his thoughtfulness. She twisted around, balancing on tiptoe, and planted a kiss on his chin. Classic short girl problems.

Fortunately, Aiden had enough height for them both. He plucked her off her feet for a real kiss, his arm banded around her waist. They traded laughs between pecks on the lips, indifferent to their rainy day surroundings.

“Gather around, gather around!” Mrs. Francis, the tour guide, screeched in the distance. “No time for dillydallying!”

Selene pulled away from Aiden. Why did she feel like a misbehaving student scalded by her schoolteacher whenever Mrs. Francis spoke?

“C’mon, or we’ll get left behind!” She grabbed Aiden’s free hand and rushed after the gaggle of tourists.

“Would that be such a bad thing, though?” Aiden asked with a waggle of his brow. “I’m sure we’d manage just fine without Mrs. Francis.”

“And what? Give us detention? Put us in time-out?”

Selene shushed him again, though a grin fought its way onto her face. Aiden’s sarcasm no longer surprised her, but it was still difficult to resist its humorous effects. 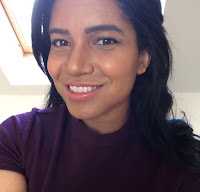 Mila Nicks is on a mission to pen heartfelt and entertaining love stories featuring women of color.
When she isn’t writing diverse love stories, you can find her globetrotting, sampling new cuisines, and spending quality time with her spunky pet Chihuahua, Zayden.
For more on Mila, including news on upcoming releases and story freebies, check out her website and subscribe to her newsletter:
Website
Linktree
Twitter
Newsletter
Bookbub
Instagram
Facebook 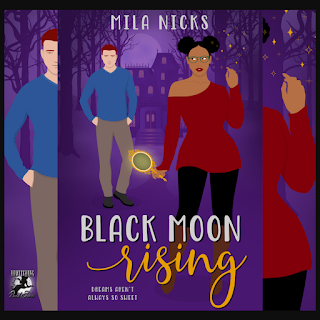