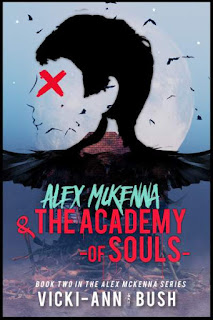 Alex Mckenna and The Academy of Souls

The Dead Need Him

Despite his great-grandmother’s warning, Alex crosses the bridge between the living and the dead, sending him and his girlfriend into the world of the Academy of Souls, a high school for dead teens who are unable to complete their journey.

There, Alex meets Ophelia, Haven’s teenage sister, who’s been searching for her for more than a century. Together, with a few friends he meets along the way, Alex must cross the treacherous terrain of the Underworld in-between, to save Haven from the clutches of the Soul Gatherer and reunite the sisters. 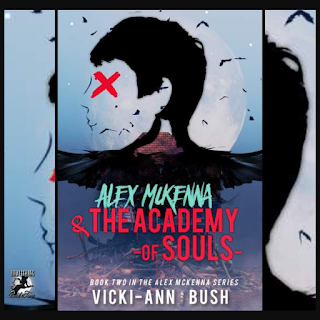 The streetlamps illuminated the black empty sea of asphalt. A quiet calm laced the row of sleepy houses. Alex reveled in the tranquility. So much noise constantly filling his head, any semblance of stillness wrapped around his mind like a child’s favorite blanket.

In the center of the glass, a small sphere of light caught his attention. At
first, he thought it was in the yard. Leaning forward and squinting, he realized it was a reflection coming from directly behind him.

Jumping up, he spun around. Growing in diameter, it was beginning to spin.

“Stop. Babe, slowly move to your left and come over here by me.”

Margaret gingerly slid to the left as Alex instructed, and then quickly scurried by his side. “What do you see?”

“It’s the vortex opening, the gateway to that girl, Ophelia.”

“Alex, please be careful. Remember what your Gram said. Don’t get too close,” Margaret pleaded.

“Sitting on the bed, she’s covering her ears.”

The wind whipped around the vortex howling like a wolf speaking to the full moon.

“I don’t hear anything?” Margaret turned to Alex.

“It’s like a high-pitched howl. It’s deafening. Wait. It’s quieting down. She sees me.”

Alex leaned closer to the anomaly.

“Alex, back up.” Margaret tugged at his t-shirt.

Margaret reluctantly let the fabric fall from her fingertips.

The anxious teen widened her eyes in anticipation.

Ophelia floated off the bed and stood directly in front of the entrance to the living.

“I’ve been searching for her for years. She was taken by a man, a Soul Gatherer. I think she is counting on you to help.”

“Can you?” Ophelia’s eyes widened.

“I can try. Where are you? Is it The Academy of Souls?”

“Yes. You know about my school?”

Alex heard the desperation in her voice as he helplessly watched the circle shrink. The wind cried out once again, as it violently thrashed around the outer edges of the bridge between the dimensions.

“What the hell? No. Alex. You can’t,” Margaret shrieked.

“I love you,” his voice trailed.

Alex stepped into the center of the storm. The vision of Ophelia rippled, traveling
to the rim of the circle, and splashing into the void. “This shield is my power to protect against evil, this shield keeps out harm. No dark entities shall pass through this shield. As I will it, so shall it be.”

Sawing to fill his lungs with air, he pushed forward and landed on the floor of the dorm room. Gazing up, Ophelia stood in front of him, her mouth wide open.

“Ugh. My head hurts. Where are we?” a voice echoed.

Alex winced. His heart punching the walls of his chest. Whipping his head around in a frenzy, Margaret was lying on the floor beside him.

Ophelia moved closer. With her pointer finger, she quickly poked his shoulder and
retracted.

“I couldn’t let you go without me.”

Alex kissed away the saltiness from her cheeks. With the back of his sleeve, he gently patted dry her eyes.

The couple turned to the bewildered Ophelia Wetherton. 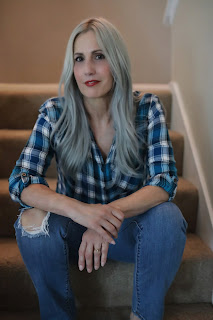 Originally from New York, Vicki-Ann currently resides in Nevada. Writing Young Adult paranormal, she finds inspiration from events that have been in her life for as long as she can remember. Inheriting the sensitivity to the supernatural from her family, they continue to be an endless source of vision and access to behind the veil.
Amazon
Facebook
Author Website
Twitter
Instagram
Tik Tok
Newsletter
Blog
Goodreads

51 Replies to “Spotlight & Excerpt: Alex Mckenna and The Academy of Souls + Giveaway”