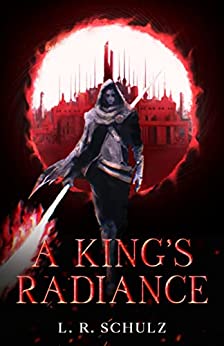 Three siblings… a rebel, a prince, a prisoner

The sun’s light shines bright over the land of Zapour, and only a select few can harness its power. But all power comes with a cost, and the world is not kind to those who refuse to pay it.

Raiz Glaive, a strong shine wielder, was born into royalty, though even royals have to answer to someone. When the King-Radiant sends one of his precious underlings to the Kingdom of Trost, Raiz quickly learns who holds the true power in the realm. After his sister is taken prisoner simply for having the violet eyes of a mystic, Raiz swears vengeance. But when an unwilling father stands in his way, Raiz promises to take revenge into his own hands.

Dazen Glaive remains heir to the throne of Trost, and a sworn defender of the King-Radiant, but he has not forgotten what happened to his sister, and will not forgive their cruelty.

Forced to be the centerpiece of her “master’s” twisted human art gallery, Isha remains a prisoner. Though she has not lost hope. Finding friends among fellow captives, she begins to formulate a plan for escape. Though what she discovers has a much more sinister bearing on the fate of all of Zapour.

Attack on Trost • #DaddyIssues • All Roads Lead to the Tower

1. Tell us a little about how this story first came to be.
Ever since I started writing I tend to analyse all of the books I love. I observe what makes good writing and try to work out why I love a said person’s works so much and try to use their techniques in my own writing. This is the same for television and especially anime. I am obsessed with stories, so when I am emotionally hit by something I view, I write down notes about what made it so impactful.

The prologue in AKR is actually inspired by an episode of one piece, where a person of higher rank captures a princess in front of their father, and there is nothing he can do to stop them. Of course, my story ends up very different, but I tried to recreate the emotions I felt while watching that episode in my first chapter.

2. What, if anything, did you learn when writing the book?
I think just being open to your friends and family about it. At the beginning I was very secretive and it was not doing me any favours. Best to share your work or at least find someone you can discuss it with! In terms of actually writing, consistency is key. Try to set daily and weekly goals and record your word counts, it works!

3. What surprised you the most in writing it?
Honestly that people liked my work. It’s really hard to gauge how readers will respond to your writing, so I really had no idea until those first ARC reviews came in, probably why I had so much anxiety around the release.

4. If it’s not a spoiler, what does the title mean?
The King-Radiant is basically the ‘Lord-Ruler’ of Zapour. The term radiance refers to the magic system and the light that certain characters gather and use from the sun.

5. Were any of the characters inspired by real people? If so, do they know?
Nope, all made up. Ironically I do also have two siblings, a brother and a sister…. But I don’t think I wrote about three siblings for that reason consciously… well maybe? Who knows!

6. Do you consider the book to have a lesson or moral?
I think there are multiple lessons I tr to portray, the main one being that all actions have consequences, and that not all choices are black and white.

8. Which character was most challenging to create? Why?
Probably Isha because it was my first time writing from the perspective of a female. I think I did it well, but it did come with its challenges. I always try to write really strong female characters, but doing it right, especially as a male, is difficult.

9. What are your immediate future plans?
Work, write, sleep, repeat….

I would like to take a holiday though! Unfortunately it is winter here in Australia, however.

Luke is a fantasy addict born in Melbourne, Australia. He discovered a passion for fantasy at a young age which developed into a love for the imaginary and a desire to write.

Despite an early passion for storytelling, Luke obtained a teaching degree before beginning a career as a primary school teacher.

When he is not reading and writing, Luke enjoys spending time with his Golden Retriever named Gem, gaming, and surfing.

A King’s Radiance is Luke’s debut novel, though he is always coming up with ideas for his next project, as well as working towards a sequel. 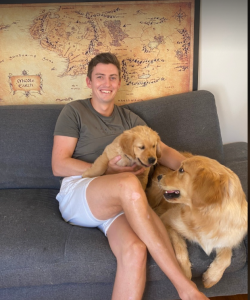 One Reply to “Spotlight & Author Interview: A King’s Radiance + Excerpt”