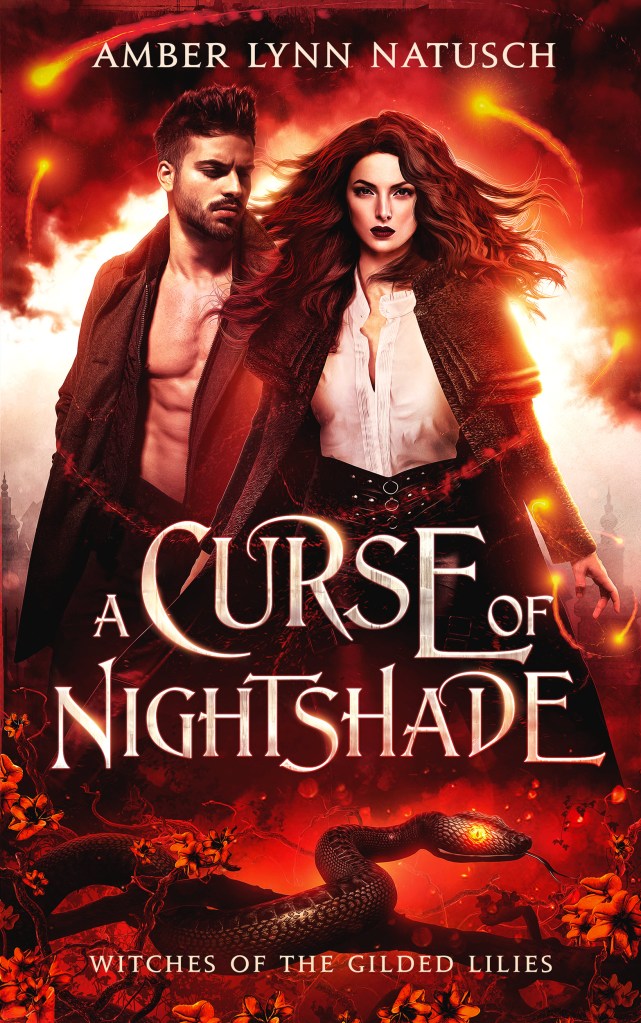 A Curse of Nightshade
by Amber Lynn Natusch

Series
Witches of the Gilded Lilies

I made a deal with a devil once, and it cost me all but a shred of my soul.

Now, cornered in an alley by a sexy, silver-tongued demon who wants something other than my final tie to existence, I’m faced with a choice.

Since escaping the demonic realm six months ago, I’ve honed my skills and my rage hunting the craven evils of New York City alongside the witches who saved me. Vigilantes, they call us. Cold-hearted killers. Monsters of the night. If only they knew how true that was—what our pasts have shaped us to be.

Mine forged me into the most powerful Daughter of Fire ever, which is exactly what this hell-spawned charmer claims he needs to kill the demon who stole my soul. Together, Zen insists, we can share in revenge–but on one condition. I must bind myself to him, an unthinkable deed with deadly ramifications at best. He’s playing every beguiling card in his deck to lure me in, but I’m no fool. He may be the enemy of my enemy, but he’s still a demon.

And I won’t make that mistake again.

A CURSE OF NIGHTSHADE, the first paranormal romance novel in the Witches of the Gilded Lilies series by USA Today bestselling author Amber Lynn Natusch. Each book in this series follows a different hero and heroine with each story playing into the series story arc.

A fierce, biting wind jostled me awake, and I wondered if hell wasn’t truly hot at all—if instead it was a frigid wasteland where I would spend eternity. But even through bleary vision, I could see that something was wrong. A bustling street filled with horses and carriages and tall buildings on the other side stretched out before me. Even in the faint glow of the gaslights, my russet-brown eyes burned, and I shielded them with my arm as I tried to block out the punishing noise surrounding me. The clomp of horse and carriage, the din of unfamiliar voices, and the squeal of police whistles stunned and overwhelmed me, and I steadied myself with deep breaths, though the tang of the air made that hard.

Confusion, then panic coursed through me as I tried to make sense of my surroundings. If I was not in hell, where in the hell was I?

I fought against my weakened limbs and pushed myself up to sit in the shadows, pressed against the brick wall at my back, but the foul stench of rot and manure assaulted me, nearly knocking me down again. As my eyes focused, I realized that I was tucked away in a building’s alcove. No one rushing by seemed to notice me, and for a moment, I wondered if I was invisible—if I was a ghost.

That theory seemed easy enough to test, so I tried to stand and walk out into the street; but my legs gave way, and I crashed to the stone beneath me in a lump. My hand shot out to brace my fall and struck a weathered wooden door to my right. Moments later, it flew open. A nun, dressed in a black habit, poked her head out to see who had knocked. Her wrinkled face turned as she searched the street before her, her rheumy eyes finding nothing. Then her gaze fell upon me, slumped against the wall, and she gasped, then backed into the building.

Not a ghost, then…

As I tried to stand again, another figure stepped out to join me in the alcove: a stunning, chestnut-haired woman with dainty features, dressed in silken finery. She could have been an angel if it hadn’t been for her lack of wings. She extended a gloved hand to me, but I didn’t take it.

“You need not fear me, Oleander.”

“I’ve been waiting for you,” she continued with a smile. “We all have. Won’t you please come inside and join us? We have much work to do.”

Before I realized it, I was on my feet, ready to follow her, but the bite of jagged brick against my palm as I leaned on the wall for support helped clear my head. “Who are you?” My dry throat made my voice so hoarse that I could barely be heard.

“My name is Ivy Foxglove.”

“How am I here?” I wondered aloud.

Her damn smile widened. “Would you like to come meet the others?” she asked, as though she already knew the answer. A little breeze swept into the alcove, nudging me forward a step.

I dug my fingers into the cracks in the façade and held on for dear life. “The other who?”

Her head canted to the side and she looked at me with a quizzical expression, as though the fact that I had no idea what was going on had just occurred to her. “Why, the other Lilies, of course. Your sister witches.” Her voice wrapped around me like a blanket, comforting me. “Now come,” she said, motioning for me to follow, “you’ll catch your death of cold if you stay out here all night.”

“But I am dead,” I replied, my voice as empty and hollow as my soulless chest.

She turned to assess me like I’d taken leave of my senses. “You are most certainly not dead. Wherever would you get such a strange idea?”

“Shh!” The harsh sound of her attempt to silence me was in stark contrast to her previous gentle demeanor, as were her firm hands on my shoulders as she hauled me inside the building. She leaned in close, pinning me to the door as she shut it. A warning niggled at the back of my weary mind, but Ivy’s voice silenced it in a second. “There will be no talk of such things in this place, do you understand?” Though I didn’t, I nodded anyway. She brushed my sweat-soaked black hair from my face and straightened my soiled shirt on my shoulders. “You are tired and confused, which makes sense given where I can only assume you’ve just come from, but this world does not know of such things and therefore must be protected—which is precisely why we summoned you.”

She took my hand in hers as she stalked through the stone building that reeked of frankincense and was filled with crosses and statues and tapestries, each depicting Mary or Jesus or some saint I couldn’t identify because I’d never bothered to learn. She moved with the grace of a predator, smiling and waving to the nuns as she passed, but Ivy was clearly no nun. Her use of the word ‘witch’ spoke to that fact.

She prattled on about ‘the others’ as she turned a corner leading to a narrow spiral staircase that seemed to go on forever. My exhaustion and hunger knew no bounds by that point, and my mind struggled to process her words as I stumbled to keep pace. We rounded the final steps to a wash of firelight, illuminating a massive library filled with walls of books. She strode to the far wall and pulled one free. The bookcase moved, exposing a room with a large wooden table covered with bowls and jars and things I couldn’t place, more shelves of books, and in the middle of it all, sprawled on a sofa and a chaise, three women of various ages staring back at me.

“Lilies!” Ivy called as she drew me into the room. “Our Daughter of Fire is finally here. We are now complete!” Their eyes raked over me as I stood before them, addled and ready to collapse. Then Ivy turned her warm green gaze to me. “Oleander Nightshade…welcome to the guild.” 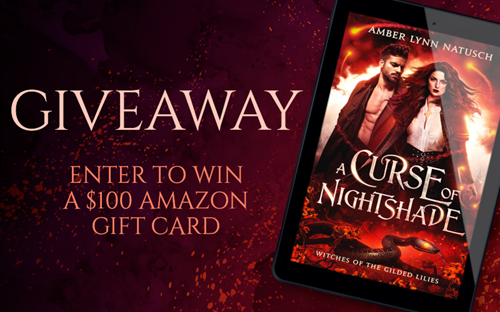 To celebrate the release of A CURSE OF NIGHTSHADE by Amber Lynn Natusch, we’re giving away a $100 Amazon gift card!

GIVEAWAY TERMS & CONDITIONS: Open internationally. One winner will receive a $100 Amazon gift card. This giveaway is administered by BookMojo on behalf of Amber Lynn Natusch. Giveaway ends 11/30/2020 @ 11:59pm EST. BookMojo will deliver the prize to the winner shortly thereafter. 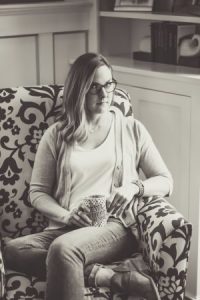 AMBER LYNN NATUSCH is the author of the bestselling Caged series for adults. She was born and raised in Winnipeg, and is still deeply attached to her Canadian roots. She loves to dance and practice Muay Thai―but spends most of her time running a chiropractic practice with her husband, raising two young children, and attempting to write when she can lock herself in the bathroom for ten minutes of peace. Dare You to Lie is her debut YA novel with Tor Teen.

One Reply to “Book Blitz & Excerpt: A Curse of Nightshade + Giveaway”