This post is part of a virtual book tour organized by Goddess Fish Promotions. Diana Raab will be awarding a $20 Amazon or B/N GC to a randomly drawn winner via rafflecopter during the tour. 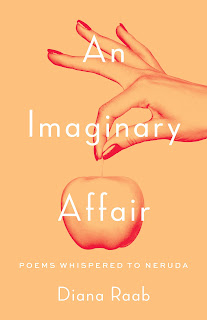 An Imaginary Affair is a collection of sensitive and sensuous poems for poets and non-poets who appreciate the challenges and intricacies of being human.

The poems touch on key human elements, such as love, desire, passion, memory, loss, and gratitude. The poet celebrates the joys, and pains inherent to a woman’s heart, while honoring the wisdoms and tones of Neruda’s poetry. Some of the epistolary poems are directed to Neruda in response to his riveting poems.

Praise:
“In this intimate collection of poems, Diana Raab pays tribute to the sensual physicality of Pablo Neruda’s work and to her own real and invented lives. With unvarnished honesty, An Imaginary Affair celebrates a woman’s heart and mind through a handful of odes, epistolary poems, and the idea that memory and anticipation can sustain and nourish us; even drinking a glowing hot toddy is transformed into a meditation on how an ordinary act can awaken desire. Her unvarnished honesty gives equal attention to matters of mortality, where loss is lyrically considered (“…will you run from me / when trains sleep at their stations”), and also explored in the spirit of open curiosity (“How long does it take / for a pine casket to disintegrate / in this caving land…). These poems remind us that to be alive is to try and balance joy and lament, and how through this effort we more deeply inhabit the world and ourselves.” –Emma Trelles, author of Tropicalia and Poet Laureate of Santa Barbara

I want you to know

if there is ever a day

when you begin to think

about my place in this world

and if I could live without you —

stop in your tracks,

and look the imprints

your feet made in the sand

where you and I walked together

arm in arm, side by side

You are ingrained in my brain

that lies beside the largest ocean

in this world where we inhabit

to one another. But, in the end,

I had to let you go: when you love

someone it’s what one must do —

set them free to do what they need

or want, and when they want

to do it, whether it is with you or not—

while always keeping in mind

I will never in my lifetime or yours

stop loving everything about you. 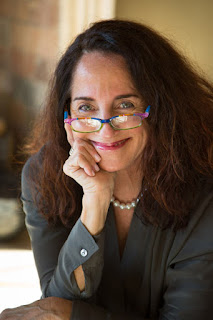 Diana Raab is an award-winning, memoirist, poet, blogger, inspirational speaker, and workshop facilitator. As the author of nine books of nonfiction and poetry, Raab teaches workshops on writing for healing and transformation, inspiring others to use creativity for healing and self-discoveries. Her 2 latest books are WRITING FOR BLISS: A SEVEN-STEP PLAN FOR TELLING YOUR STORY AND TRANSFORMING YOUR LIFE and WRITING FOR BLISS: A COMPANION JOURNAL, available on Amazon and wherever books are sold. Publisher’s Weekly says this about WRITING FOR BLISS: “This thoughtful and detailed primer…targets pretty much anyone interested in writing a memoir.”

Raab has written over 1000 articles and poems including her contributions to Psychology Today, Thrive Global, Wisdom Daily and many others. She has taught at UCLA Extension, the Santa Barbara’s Writer’s Conference, 1440 Multiversity, Hugo House and others.

Her chapbook, An Imaginary Affair: Poems Whispered to Neruda is written in response to his work. Elena has always been a disappointment. Her magic is practically non-existent and now, on her sixteenth birthday, she is expelled from magic school by the strict headmistress–also known as her mother. Cast out into the world of the magically inept with only her familiar for company, Elena feels lost and alone until she meets a strange boy in the woods.

Quinn is a thief, a hunter, and a hothead. His unexpected friendship with Elena awakens a fiery side in him–quite literally–and uncovers new and surprising magical abilities. Except men aren’t supposed to be capable of magic.

With Quinn’s help, Elena carves a safe new life as a barmaid, but when she is attacked, her powers awaken with shocking ferocity. Elena’s explosion of magic creates a power surge that attracts the attention of magical investigators, sent to uncover and contain the source of the power surge.

But the awakening of their powers kickstarts an ancient prophecy. Will they be able to escape those that hunt them? Can they fulfill the prophecy, destroy the turmio and save magic from being destroyed once and for all?

“Come on. Just work, dammit,” Elena muttered to herself, trying for the millionth time to cast her spell.

Agon had stretched his lithe, weasel-like body across a long, skinny patch of sunlight on the floor of the testing room. He’d spent the morning basking in the warmth of the sun-drenched stone and flicking his fluffy blue-black tail back and forth. As her closest, and arguably only, friend, Agon knew nothing he could say would make her feel better. She was in a mood, and the best thing he could do was to leave her be.

Sparks flared and quickly sputtered out from Elena’s fingertips.

“Dammit. Why can’t I get this stupid spell right?” It was a rhetorical question, but Elena was so frustrated by her own ineptitude that she would have traded everything she owned to successfully complete a spell on the first try.

Elena was easily the worst enchantress in her class, probably the whole school. The other students mocked her mercilessly. It didn’t help that her mother, Madame LaBelle, was the most famous enchantress in the whole country, possibly the world, and the headmistress of their school. She could turn a seed into a centuries-old tree with the flick of her wrist. Elena could grow a seed into a sapling with twenty minutes of chanting, flicking, waving, and praying. Maybe. On a good day.

Madame LaBelle was notorious for her skills with magic as much as her beauty. Unfortunately for Elena, she inherited her looks from her father. At least, she assumed that’s where she got her flat hair and dull brown eyes. She’d never actually met him. In Waverly, as far as enchantresses were concerned, men served one purpose: impregnating women. The men were used and released of all parental rights, whether they liked it or not. Most men didn’t even know the woman they had lain with was an enchantress, much less that they had fathered a child as a result. The women opted to disguise themselves — bar wenches, visitors lost in the big city, damsels in need of aid on the side of the road, etc. — just to get what they needed and be gone before the man even knew her name.

It was crass and cowardly, but Elena had been raised to believe it was for the best. Men weren’t capable of raising children, especially magical ones, and an enchantress always gave birth to another enchantress. Never in the history of the world, had an enchantress given birth to a non-magical child. Or a boy, for that matter. Enchantress beget enchantress. End of story.

Elena dreamed of love and happy endings when she was younger. All the girls did, but their time at Harbor Ridge taught them that magic was their top priority, followed closely by their loyalty to the school and Madame LaBelle. Elena always felt that it was a tad hypocritical how often her mother preached about loyalty to their family — the school and their classmates — when she never paid any attention to her own flesh and blood. What sort of mother neglects her own child to favor those who are more adept at magic? Not a good one, Elena mused glumly.

Agon had been with her since before she was born, like all familiars. They were born together and stayed attached for an “unusually long time,” according to her mother. Typically, familiars disconnected from the baby’s umbilical cord within a few days before settling into their permanent animal form. Agon and Elena stayed connected for two weeks, all the while Agon remained a blob encased in the placenta. Her mother had many specialists, including a Therionology Enchantress, or an animal enchantress, come and inspect Agon and try to coax him into taking any form at all. Nothing worked. Baby Elena just spent her days cuddling “this disgusting blob of goo” and sleeping. Madame LaBelle often liked to remind Elena of how unusual that was, and how that should have been a sign that her daughter was going to be different, and not in a good way.

Agon did eventually develop into an animal; however, he didn’t change into anything anyone had ever seen before. When she was young, Elena overheard one of the scholars reminiscing with another about how they’d managed to identify Agon as a Raju. Madame LaBelle had tasked all of the scholars in the Therionology department to scour all the history books and tomes to identify him. Agon was the only known Raju in ages, and Madame LaBelle hated it. Rajus were blue-furred, weasel-like creatures that had lightning abilities. Another frustrating hiccup, as far as Madame LaBelle was concerned. Familiars weren’t supposed to have magic of their own; they were just meant to be guides to help the enchantress learn to control her powers. Mallory lives in Texas with her husband and their two young boys. She spends her days homeschooling and full-time parenting. Her nights, and any free time she manages to carve out during the day, are devoted to reading and writing.