POSSIBLE ULTIMATE TOUR EXPERIENCE TICKETS: Represent, It’s All About the Journey, Snark It Up, Love Actually, A Villain You Love to Hate, The Wings of Change, Storyteller in the House, Bring On the Magic, Simply Mythical, A Gate to Another World

The God of Time wants to destroy Eternity.

And a reclusive deity does what no god should ever do: she answers a prayer.

As punishment, she is stripped of her powers and trapped in a mortal’s body. Now a Wyrd – a fated god – she is haunted by the memories and thoughts of her host and must hide her true identity in order to survive in Niflheim, the rival Norse Underworld.

There she discovers the afterlife is not quite what it used to be. Niflheim’s new ruler threatens the precarious balance of a world overrun with outcast deities and mortals alike.

To save her own sanity and find her way back to the stars, she must help the other Wyrd overcome their grievances to defeat this enemy, but those who would be her allies appear to have motives as hidden as her fragmented consciousness.

And yet it seems the greatest threat to her freedom comes from within, and the prize it seeks is her immortal soul…

1.What inspired you to write this book? OR Tell us a little about how this story first came to be. Did it start with an image, a voice, a concept, a dilemma, etc?

I found this ancient yew tree in an old graveyard back in the UK. I used to just sit there amongst the faded gravestones, imagining how it all would have looked like when the tree was young. This led to a series of incomplete historical fiction stories based on the idea of time travelling through trees. I liked the concept, but failed to make it work in the ‘real world’. Eventually I abandoned reality altogether and used the plot of another unfinished novel written years before, a sort of Clash of the Titans meets Stargate and set the story in Niflheim because I wanted to bring the Norse gods to the mix as well and so (after many drafts, revisions, edits, tears and curses) Timelessness was born.

I learned that less is more when telling a story and that it’s a good idea to leave your ego out of it.

When I finished I had enough surplus material for another two books and despite how hard it was to write the first one and the overwhelming amount of disappointment that came after publishing it, I still wanted to keep writing.

Wyrd roughly means fate or personal destiny, and since one of the themes in the series is fate vs the consequences of one’s actions, it seemed appropriate.

Besides, the story, as well as its structure, is a bit weird with a satirical undertone. Definitely not your typical fantasy.

And since the inspiration for Wyrd Gods came from several ancient mythologies and half the characters are gods, I had to mention gods in the title.

No. I try really hard to keep reality separated from my work to avoid such comparisons (and complications).

Wyrd Gods focuses on the thin line between selfishness and self preservation and how limited each individual’s perspective is and the consequences of assumptions and miscommunication.

There’s several lessons actually, but you’ll need to read the entire series to learn them.

The horse riding scene because it was one of the first ones I wrote. The bedroom scene in the dark, mostly because it’s the one most people comment on and seems to make them uncomfortable.

And, of course, any scenes with Loki. He’s just so much fun to write.

Ideth and Chronos. Ideth because she’s an almost complete opposite of me. I always have to think through her actions and motivations very carefully in order to make sense of them. And Chronos because he’s the personification of time. If his actions make sense, I’m probably not doing a very good job.

Publish Nephilim’s Hex (in July, if all goes well). By the time this interview comes out I may have started, or at least announced, a Kickstarter to fund the audiobooks for The Dharkan, Nephilim’s Hex and Anachrony (books 2, 3 and 3.5 in the series) and of course, finish the series. Book 4, Anamnesis is drafted, but still needs a lot of work.

Susana Imaginário is a misfit from Portugal. She moved to England to pursue a career as an aerialist and now runs a Board Gaming retreat in Ireland with her husband and their extremely spoiled dog.

Her hobbies include reading, playing board games, hanging upside down, poking around ancient ruins, talking to trees and being tired. 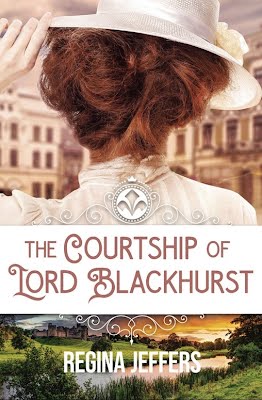 The Courtship of Lord Blackhurst
by Regina Jeffers
Regency Romance

What happens when a lady falls in love, not with her betrothed, but rather with his cousin?

Miss Priscilla Keenan has been promised to the Marquess of Blackhurst since her birth. The problem is: She has never laid eyes upon the man. So, when Blackhurst sends his cousin to York to assist Priscilla in readying Blackhurst’s home estate for the marquess’s return from his service in India, it is only natural for Priscilla to ask Mr. Alden something of the marquess’s disposition. Yet, those conversations lead Cilla onto a different path, one where she presents her heart to the wrong gentleman. How can she and Alden find happiness together when the world means to keep them apart? Inspired by Henry Wadsworth Longfellow’s “The Courtship of Miles Standish,” this tale wants for nothing, especially not a happy ending, which it has, but that ending is not what the reader anticipates. 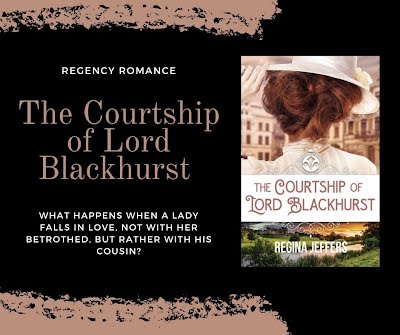 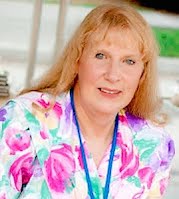 Regina Jeffers, an award-winning author of historical cozy mysteries, Austenesque sequels and retellings, as well as Regency era romances, has worn many hats over her lifetime: daughter, student, military brat, wife, mother, grandmother, teacher, tax preparer, journalist, choreographer, Broadway dancer, theatre director, history buff, grant writer, media literacy consultant, and author. Living outside of Charlotte, NC, Jeffers writes novels that take the ordinary and adds a bit of mayhem, while mastering tension in her own life with a bit of gardening and the exuberance of her “grand joys.” 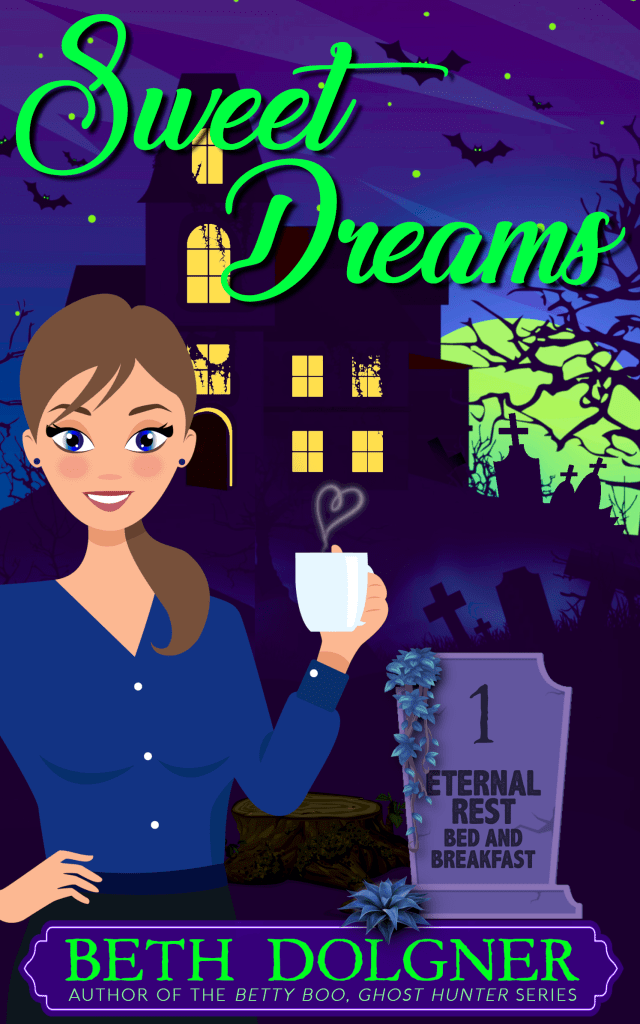 DIG INTO A SHALLOW GRAVE
AND A NEW PARANORMAL COZY MYSTERY SERIES.

Emily Buchanan has always dealt with ghosts at Eternal Rest Bed and Breakfast—after all, it is next to the town’s historic cemetery. When paranormal activity begins to escalate, though, she knows that someone—or something—is desperately trying to communicate. When a body is discovered in a shallow grave, an old town scandal is resurrected, and Emily knows she has to find out what happened if her guests and her ghosts are ever going to get a good night’s sleep.

SWEET DREAMS, the first full-length novel in the new Eternal Rest Bed and Breakfast paranormal cozy mysteries by Beth Dolgner. Set in the rural North Georgia town of Oak Hill, where antiques shopping is a lot more common than murder, Emily Buchanan runs Eternal Rest Bed and Breakfast in a Victorian house built right next to a cemetery. Emily teams up with her best friend and psychic medium Sage Clark and the ghosts of Eternal Rest to solve murders. The only mystery Emily can’t solve is why her late husband’s spirit seems to be trapped between this world and the next. 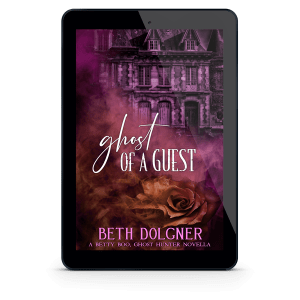 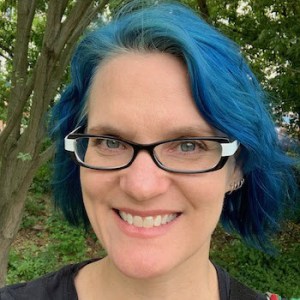 BETH DOLGNER writes paranormal fiction and nonfiction. Her first book was the nonfiction Georgia Spirits and Specters, which is a collection of Georgia ghost stories, followed by Everyday Voodoo. Beth made her fiction debut with the Betty Boo, Ghost Hunter paranormal romance series, set in Savannah, Georgia. In addition to writing, Beth also gives presentations on Victorian death and mourning traditions as well as Victorian Spiritualism. She’s always up for going looking for ghosts, too, just like her characters. You can usually find her haunting the historic cemeteries around her home in Berlin, Germany.