T-minus 7 days till The Ties that Bind by Susan L. Markloff goes live! Pre-order the next exciting book in The Human Born Era series to get it on publication day!

Three months ago, seven pillars of light lit up the continents. Seven teenagers rose to fight. The world survived.

Now Jen Monroe is tasked with finding the six other Human-Borns. Still reeling from her traumatic encounter with the monstrous Cregorous, she faces cultural barriers, personality clashes, and a worldwide trek to find those destined to help her. But threats sleep in the shadows, and the humans were not blind to what they witnessed seven teenagers accomplish.

Meanwhile, the very enemy the Human-Borns are fated to encounter lies in wait.

He is patient. He is cunning. He is ruthless.

Soon, these seven teenagers find themselves in a battle they never expected. But in their drive to save those they care about, what might be lost in the process?

Jennifer Monroe is an average eighteen-year-old girl, and she knows it.

Which is precisely why no one—least of all herself—would suspect anything extraordinary from the quiet, boring girl who only has a few good friends to call her own. But that all got flipped on its head about a year ago, when two imposing men, a complete goofball, a werewolf, and two large four-legged creatures barged into her life.

Now over a year later, Jen leads a double life. Mild mannered, quiet, high schooler by day; dragon slayer and raw-energy-wielding-warrior (in training) by night. Juggling SAT scores, papers, and mastering the art of flying, she’s managed to keep her friends and family oblivious of her hybrid abilities and continue on a track for college. Everything was going swimmingly.

Until one normal, foggy, November morning, when a dragon crashed through the clouds, heralding a small army to descend on her high school. All for little, forgettable her. Making her realize that maybe there’s a whole lot more going on than she originally thought.

Available on Amazon and Also in a Dyslexic Friendly Edition

Susan L Markloff is a rising YA Fantasy author. Upon devouring fantastical worlds as a child, she often spent her days playing make-believe and spinning stories with friends and family. At the age of 18, she wrote what would become the first draft of her debut novel, The Rise of the Raidin. While at Houghton College, she cultivated a love for the written word, and majored in Creative Writing. There she was encouraged by other aspiring authors and by her professors to hone her skills and write the best version of her stories. The Rise of the Raidin, book 1 of The Human-Born Era, is the first of over twenty planned novels revolving around the world of Tilion.

Young architect Wren Fontaine lands her dream job: restoring Greenleaf House, New York’s finest Gilded-Age mansion, to its glory days. But old homes have old secrets: Stephen Greenleaf-heir to what’s left of his family’s legacy-refuses to reveal what his plans are once the renovation is completed. And still living in a corner of the home is Stephen’s 90-year-old Aunt Agnes who’s lost in the past, brooding over a long-forgotten scandal while watching Wren with mistrust.

Wren’s job becomes more complex when a shady developer who was trying to acquire Greenleaf House is found murdered. And after breaking into a sealed attic, Wren finds a skeleton stuffed in a trunk. She soon realizes the two deaths, a century apart, are strangely related. Meanwhile, a distraction of a different kind appears in the form of her client’s niece, the beautiful and seductive Hadley Vanderwerf. As Wren gingerly approaches a romance, she finds that Hadley has her own secrets.

Then a third murder occurs, and the introverted architect is forced to think about people, and about how ill-fated love affairs and obsessions continue to haunt the Greenleafs. In the end, Wren risks her own life to uncover a pair of murderers, separated by a century but connected by motive. She reveals an odd twist in the family tree that forever changes the lives of the Greenleafs, the people who served them, the mansion they all called home-and even Wren herself.

Praise for The Greenleaf Murders:

“A delightful who-done-it in which the house is as engaging as the wonderful heroine. Readers will want to get lost in these rooms and these pages.”

“If you love houses and puzzles – which I do – you will be captivated by THE GREENLEAF MURDERS, the first in Richard Koreto’s new series. Equally sure-footed in the gilded age of the mansion’s heyday and the contemporary world of its decline, Koreto has woven a pretzel of a plot, introduced a charming new heroine, and whetted appetites for more grave deeds and grandeur.”

“The Greenleaf Murders mixes a modern suspense mystery with the love of old-world mansions and iconic High Society. Buried secrets threaten a family clinging to their former glory as two murders surface, a century apart. Koreto weaves a story that creates the perfect tension between the beauty of the golden era and the fear of a killer in plain sight.”

“One would think that a murder mystery featuring old homes, architecture, and rich blue bloods would be a dull read, but that’s not the case with R.J. Koreto’s finely-written “The Greenleaf Murders.” Filled with twists and turns and sharply-drawn characters, this well-done novel is very much recommended.”

R.J. Koreto is the author of the Historic Home mystery series, set in modern New York City; the Lady Frances Ffolkes mystery series, set in Edwardian England; and the Alice Roosevelt mystery series, set in turn-of-the-century New York. His short stories have been published in Ellery Queen’s Mystery Magazine and Alfred Hitchcock’s Mystery Magazine, as well as various anthologies. In his day job, he works as a business and financial journalist. Over the years, he’s been a magazine writer and editor, website manager, PR consultant, book author, and seaman in the U.S. Merchant Marine. Like his heroine, Lady Frances Ffolkes, he’s a graduate of Vassar College. With his wife and daughters, he divides his time between Rockland County, N.Y., and Martha’s Vineyard, Mass.

Visit these other great hosts on this tour for more great reviews, interviews, guest posts, and giveaway entries!

Join For a Chance to Win:

This is a giveaway hosted by Partners in Crime Tours for R.J. Koreto. See the widget for entry terms and conditions. Void where prohibited.

Get More Great Reads at Partners In Crime Tours 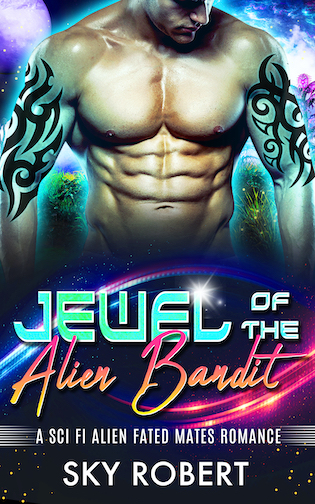 A jewel to steal. A planet to save. A leader to love?

I’m supposed to be taking rulership of my planet when I find myself sneaking aboard an offworlder’s ship. My clan needs scientists capable of solving Estreldez’s food imports and spawning decline without being enslaved by krelis or necia control.

It’s just my bad luck the last known shol male is a compatible mate, when being with him could jeopardize my entire species. I am a leader, and it is my clan duty to mate for survival… not love. He can’t be mine if I wish to protect my planet from invasion. Mating with a nearly extinct species is reason enough for unscrupulous outlaws to get away with attacking my planet, without breaking any star system codes.

I can’t keep him. He had an obligation to any surviving shol to spawn with his own kind, and I had to mate for political protection of my planet, as the next Almder Leader of Estreldez. It wouldn’t work, but my mating loh react to his touch, and everything in me wants him to be mine.

A sci-fi fated-mates alien romance from Sky Roberts. Jewel of the Alien Bandit is the first of the Treasures of Trillume series. This steamy, page-turning romance between an outlaw alien and the strong female leader that wants him, will have you devouring every morsel towards their HEAFN.

A standalone romance, consensual steamy 18+, and an overarching plot laced between each book. World building sci-fi adventure but with a sexy twist. Strong females, and possessive (but respectful) love interests. For all you alien lovers out there that like vibrating, pulsating extremities, and mates that bond for life. The steamy bare chest should be evidence enough of what you are getting yourself into. You’re welcome. 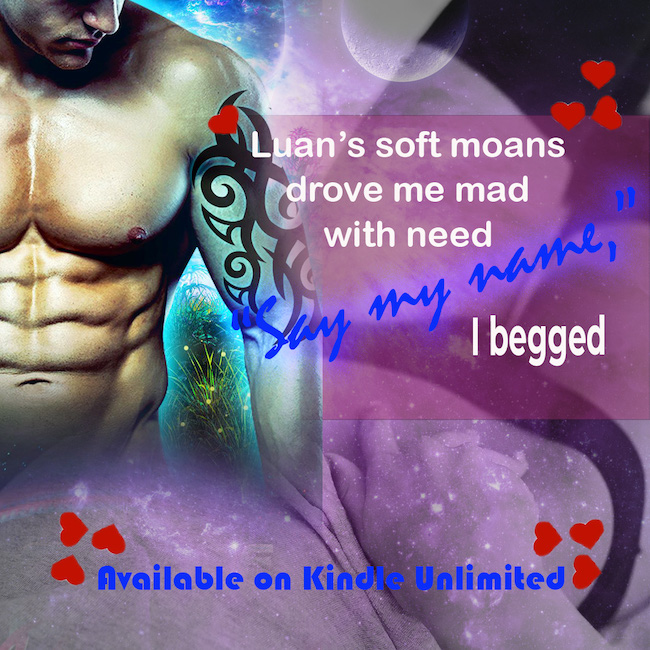 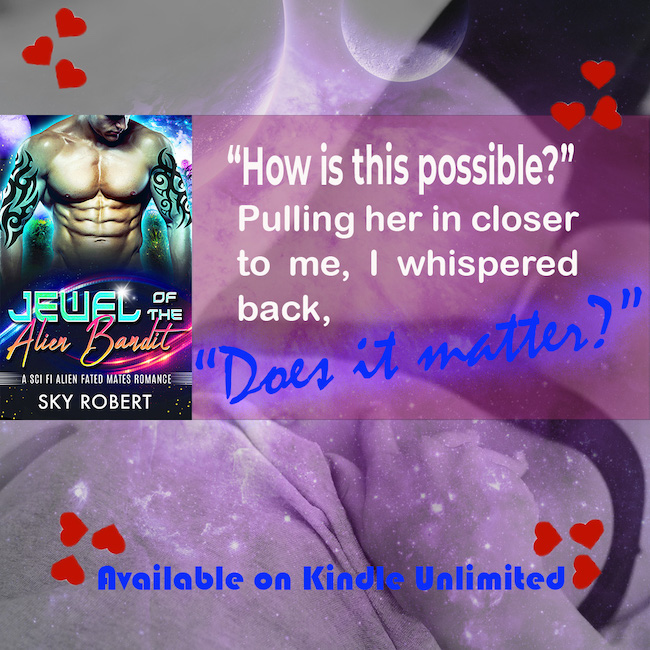 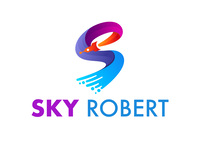 Sky Robert is a mom of two tiny humans in training, narrates audiobooks for fantasy/sci-fi indie authors, and when she isn’t writing (which is MOST of the time) you can find her consuming copious amounts of coffee, creating podcasts for Blind Indie Novel Dates, BINDER, to promoting indie authors, reading alien smut, fantasy, sci-fi and romance books, chowing down on Indian butter chicken, and when she actually hangs out with people in person, in real life, outside of the internet, (gasps) she’s playing board or card games. All around nerd, lover of the strange, and all things fantastical. Grab your first free Alien Romance Her Alien Exchange by joining her newsletter today! https://dl.bookfunnel.com/f2fwrjww4p