Title: Young King Arthur and the Round Table Knights

Arthur grew up a peasant, but when he was fourteen, Excalibur chose him, and now as King Arthur, he must learn to play the game of royalty quickly … or suffer the consequences.

There was no reason for Arthur to think he would ever become king.

A peasant and son of a baker, Arthur grew up in the castle town of Camelot. When he attended the choosing ceremony, it was merely to see who would draw the Holy Sword, Excalibur – to see who would inherit the throne of the recently departed King Uther. He never expected the sword would choose him…

Now, at the young age of fourteen, he has become King Arthur, and for all the power he has gained, he has made just as many enemies. Surrounded by the Knights of the Round Table, and led by the mysterious mage, Merlin, Arthur is grateful for his allies, though he would just as soon return to his old life. Surely, someone more worthy should be chosen as king.

Arthur is in the middle of chaos, a world where everyone wants more than they let on, where many hate the idea of a young boy with no noble background being crowned king; where cold stares and whispered words are just as sharp as an assassin’s blade.

As Arthur fends for his life, he must draw on the strength of his knights, especially fifteen-year-old Mordred, who becomes closer to him than the mere bounds of duty. He must become king, not just in name, but in his heart.

And he must do it quickly, because his enemies want more than just his crown…

Two days had passed since I’d pulled the sword free—since becoming King. On the first full day within the castle, Merlin had found me wandering the halls and dragged me back to my room to be fitted for an outrageous amount of clothing. We discussed Illian.

Merlin assured me that he was being treated well within the dungeons, despite his cold attitude that he gave to everyone. Nothing would be done to him without my consultation. That fact only added more weight.

He also brought up his conversation with my mother and the letter I should expect. The day after, I received it. She’d expressed her worries, but also her love and support. She praised me, and though I knew it was meant as encouragement, it only made me more wary and frightened. My station as King was not something to take so lightly—even if she had all the confidence in the world. I tried to reply, but nothing I wrote seemed fitting. Rather, it all seemed more like complaints and childish pleading. It wasn’t something I wanted to send to her, not after having her praise me.

Within the mirror, the striking blue doublet that covered me looked even more out of place as I thought about my mother’s letter. The kingly raiment I now wore wasn’t the only one. I had a rich dark purple one, a red one, a light blue, and a solid black. And to think, those were just for me to wear when I wasn’t in the throne room! All the different clothes were going to make my head explode.

“Yes, he did a wonderful job,” Elias said. “Perfect fit. Of course, he is the best tailor in the lands. Only the best for our King.” He stepped back from me and bowed.

“I don’t need the best,” I said softly, but Elias caught it.

“I suppose it’s good to know that you haven’t drowned in the riches, but at the same time you do need to look the part at least.”

I turned to look out the window. The sea burst against the cliff side, throwing water in a violent display of white foam. I watched the waves for a moment longer, knowing that I needed to get going. I was stalling because I was nervous about meeting the knights. What were they going to think of me? I was young, and a peasant. No royal blood flowed through my veins.

I chewed on my lower lip. Elias touched my arm. I looked over at him. He didn’t say anything, but he didn’t have to. I nodded and followed him out of the room and into the large corridor.

We left the castle and crossed from the tree-lined grounds into the gardens. The smells of the flowers permeated my senses. I took a deep breath. The scents calmed some of my nerves.

Ahead of us on the other side of the castle grounds stood the Knights’ Tower, where they all resided. The tower was imposing, dark in color, and vines crawled up the sides of the rocks. Windows lined the entire building, spiraling up to the top. Elias led me to the tower’s set of wooden doors and bowed to me.

My heart clenched and ice shot through my chest. I was going to be alone with the knights. Terror flooded me and I began to tremble. Elias touched my arm again. I focused on him. He smiled and the gentle look helped me relax.

“You will be just fine, my lord. They might be rough around the edges, but they’re loyal and actually very nice.”

He bowed and left me standing in front of the doors. I contemplated leaving and hiding in the library. I turned and took a step forward—right into a warm body. With a startled gasp, I stumbled back and bowed forward as I squeaked, “Forgive me! I didn’t see you there! I’m sorry I ran into you!”

The one who I had run into snickered and I recognized that tone well. I looked up to see Merlin smirking at me. My heart fell like it had become a lump of lead. I stared at him as he laughed at me. I could feel a hot blush creeping across my face.

“My, my. You’re a King now, my lord. You don’t bow to anyone. So, what is it that has you cowering before the Knights’ Tower? Are you intimidated by them?” Merlin seemed a little more welcoming, but I still didn’t like the look on his face. It seemed like he was scrutinizing me beneath his outward demeanor.

I turned back to the double doors and swallowed dryly. “They won’t approve of me.”

“Not everyone will. But that’s what it means to be king. No one is loved on their first day on the throne. Everyone questions the new crown; that is simply how it is. It takes time to earn trust and loyalty. You will earn it. But…if you do nothing, then you will have nothing.”

His words shook me. The mage was right. I understood then why he was the advisor to the King of Camelot. He knew what he was talking about. Despite being condescending at times, he was truly helpful.

“I can’t avoid everything, and why should I? Thank you, Merlin.”

I turned around and pulled the door open.

Siryn Sueng is a writer of fantasy, paranormal, and even Sci-Fi genres. She’s married to a wonderful husband with a minion of two years. They have a full house with three adorable fur babies, Anubis -the mighty cat hunter- Kida -the momma bear- and Mishka -the loveable husky-.

Siryn is a lover of games on a wide range of platforms. She plays on the PC, console, and hand-held devices including the phone. Japan is where she would love to visit sometime and is a huge inspiration to many of her projects. She’s a huge fan of Japan, including manga and anime. Siryn has even begun to dabble in comic/manga script writing. Future works in this will be posted on WebToon. 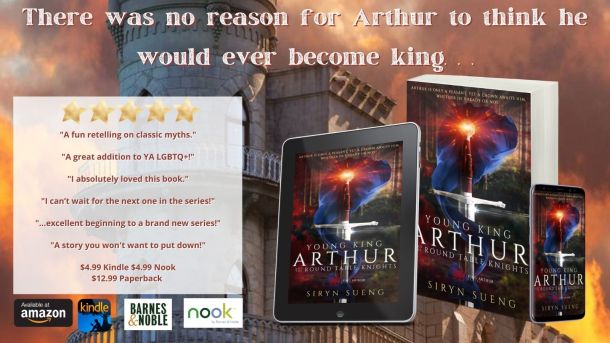 One Reply to “Book Blitz & Excerpt: Young King Arthur and the Round Table Knights”