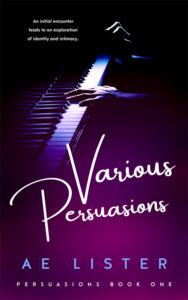 A non-binary Dom. An eager young sub. Service, orgasm control, bondage. An initial encounter leads to a synchronous exploration of identity and intimacy.

Nic has been holing up alone in their townhouse for too long, getting over a bad ‘relationship’, and it’s time for them to start living again. When Nic meets Vincent, neither expects the tentative relationship to take off like a runaway train. But each layer of the attractive and seemingly vulnerable young man Nic exposes ignites their own desires and leads both on a path to revealing the most interesting parts of themselves.

Who knew piano practice could be a form of sexual service? Or that a pair of overpriced panties could inspire such devotion?

Through bondage, service, objectification and the purchase of large quantities of lacy unmentionables, as well as a few specific sex toys and devices, Nic explores how far Vincent will go to please them and how much of themself they will risk to have him.

The call came in near midnight that Friday.

I was sitting down with a beer and my remote to watch The Great British Baking Show when my phone started playing Sympathy for the Devil—Daphne’s ringtone.

What could she possibly want from me at this hour? She should have been working. I knew she was working. It was Friday night, for fuck’s sake. But the curiosity got to me.

“My lovely Nic. Are you busy?”

“Never too busy for you, Daphne. What’s up?”

She giggled. I pictured her face, its pixy-like innocence that belied a very dark soul. “I have this client—”

“No,” I said without thinking. I knew what she wanted, and the answer was no. It was always no.

“You know I don’t do that anymore.”

She sighed. “Just listen, okay? Just listen to what I have to say.”

My jaw tightened and I wanted to hang up, but I wouldn’t do that to Daphne. We’d been friends for too long. She’d known me, like…forever.

“Fine. But the answer is still no.”

Not to be deterred, Daphne continued. “This client… His name is Vincent.”

I snorted with derision. “A guy, Daphne?”

I mean, she was right. But…still. “I don’t have experience with guys, Daphne. You know that.”

I looked at the clock above my flatscreen. It was twelve-oh-four. “You have five minutes.”

She giggled. “Okay. So, he just left. And our session was…interesting.”

“I don’t think he’s into women like me,” she said with a pout in her voice.

“I mean, he’s into submitting. That’s for sure. And he did submit for me. And he liked submitting for me. But…”

“But?” I picked up a pen from the coffee table and started pushing the button with my thumb. It made a comforting clicking sound.

“Are you fucking kidding me, Daphne?”

“Well, that’s a damn shame, Nic, because you were the best at it.”

“Not by anyone I’ve ever spoken to about you.”

I held my breath. “Who have you spoken to?”

She hesitated and I knew the answer.

“I mean, I know a lot of people who knew you when you—”

“Daphne,” I said and closed my eyes, leaning my head back against the wall. “Did you talk to Zane?”

She hesitated again and I knew she had. “He misses you.”

My heart shattered a little bit, but I put it back together with sheer will. “It doesn’t matter.”

“Nic, he didn’t mean to treat you badly.”

“But you don’t have to stop doing what you’re good at.”

My voice, when I found it, sounded small. “I’m only good at it…because of him.”

“I know he taught you. I know he mentored you. But you surpassed him a long time ago.”

That surprised me…and didn’t. Zane had never been one to hand out compliments directly. It figured this would be how I found out.

“You know I wouldn’t lie about this, Nic.”

“I know.” My voice was barely above a whisper.

She continued in a soft voice. “Can I please just tell you about Vincent? Please?”

“Okay. Well, he’s twenty-four and cute as shit. You know I only agree to the cute ones.”

I couldn’t help but laugh. Daphne had high standards when it came to physical attractiveness. I’d never cared about that as much as she had. Still…

“Too young for him to know what he wants?”

“I thought you said he’s not working out.”

She giggled again and I heard her self-deprecating sigh. “I’m too girly.”

Honestly, she was girly. She was fucking high heels and corsets and ribbons, doling out praise and punishment with crops and paddles and rulers. Most of her clients dug that. Maybe not this one?

“It’s true. He needs something else.”

“So, what am I, Daphne?” That was the question I’d been trying to answer my whole life.

“You are my Nic. You’re a guy, a man for all intents and purposes. Except you have that unique element…”

I couldn’t help but laugh. “A pussy?”

Physically, I was female. I had a pussy and I had boobs, albeit really small ones—small enough that I could ignore them for the most part, which I generally did. I didn’t need a bra or a binder. If I had been stereotypically female, their size would have been a problem. I could pass as male most of the time. I did pass as male most of the time and I had no problem with that, except romantic relationships could be tricky.

I had predominantly dated women. I was predominantly attracted to women. There had been the occasional man—like Zane—and I’d always regretted those experiences. But Zane had taught me to embrace my Dominant side, and he’d taught me the practical skills to do it—not with him, but with women. Daphne had helped too. She had helped me to accept who I was and what I liked to do.

When Zane and I had ‘broken up’, for lack of a better term, I had turned my back on all that. And here was Daphne bringing it back up when it was really the last thing I wanted.

“He’s lost, Nic. He’s shy and he’s ashamed of himself and what he wants. But he’s at a point that he can’t deny himself anymore. So, he came to me. But I think he needs you.”

“He’s not looking for stereotypes. I don’t…do it for him.”

I leaned my head back against the wall and propped one bare foot on the sofa. It was small, perhaps the most feminine part of me and the reason I generally wore boots and clunky shoes. I didn’t deny I dressed like a guy. I looked like a guy. I felt like a guy most of the time. But I didn’t hide the fact that I had female parts. It simply didn’t come up in conversation. I wasn’t ashamed to be atypical. To be honest, I liked it. I strived after uniqueness. I didn’t want to be like everyone else, and I wasn’t.

She laughed again. “I kind of am.”

“Okay, you kind of are, but you’re lovely.” The truth of this choked me up and I realized I’d missed her. “I don’t think I can compete with you.”

“No. I feel like he should make up his own mind.” She said this with confidence.

Daphne was perceptive and smart. “Good.”

I heard a squeal on the end of the phone. “Then you’ll meet him?”

“Yes! Even if it doesn’t work out the way I think it will, thank you for agreeing to do this, Nic. It means everything to me.”

She cleared her throat. “I should mention that he’s not a paying client. I took him on as a favor to someone.”

“That’s fine. You know I don’t monetize this sort of thing.”

“I know, and you’re nuts. Do you know how much money you could make?”

“Listen… He’s really sweet. You’re going to like him.” 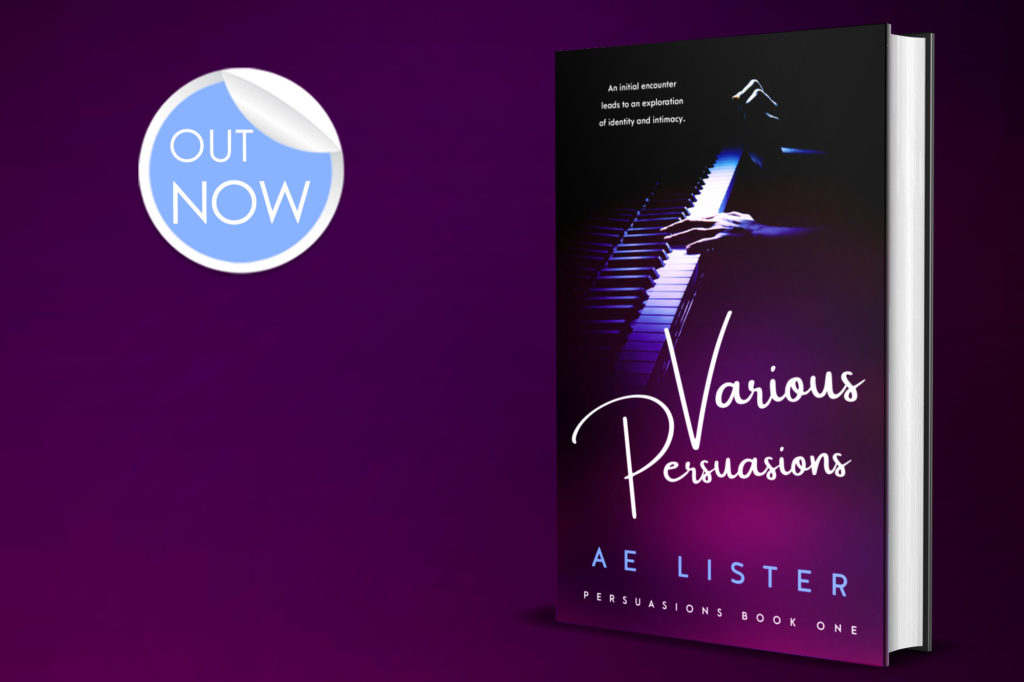 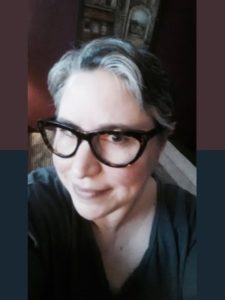 AE Lister/Elizabeth Lister is a Canadian non-binary author with a vivid imagination and a head full of unique and interesting characters. They have published 10 books, one of which received an Honorable Mention from the National Leather Association – International for excellence in SM/Leather/Fetish writing.

AE LISTER IS GIVING AWAY THIS FABULOUS PRIZE TO ONE LUCKY WINNER. ENTER HERE FOR YOUR CHANCE TO WIN A LOVELY GIFT PACKAGE AND GET A FIRST FOR ROMANCE GIFT CARD! Notice: This competition ends on 6TH April 2021 at 5pm GMT. Competition hosted by Totally Entwined Group.

If you have to get spam comments, they should all be this entertaining.