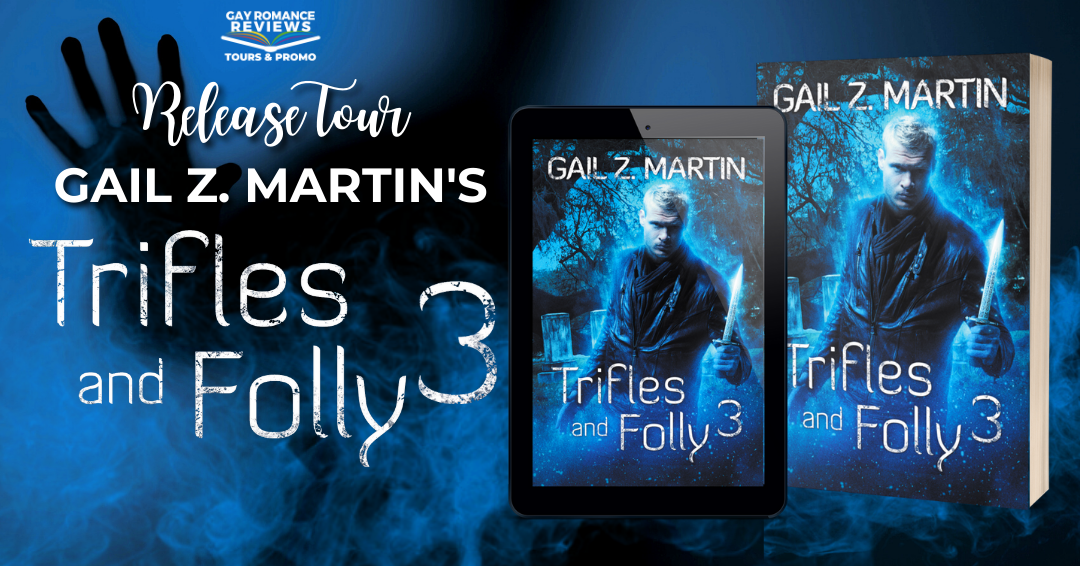 The ghost of a jilted lover, an accidental hell-mouth, a soul-eating monster, cursed needlework, and a rogue’s gallery of sullied spirits—all this and more awaits!

Wander the shadowed paths through this spooktacular collection of short stories and novellas that take place around and between the novels in the Deadly Curiosities series.

An extension of the Deadly Curiosities urban fantasy novel series, this collection can be read as a standalone. It contains two novellas and five short stories: The Adventure of the Melted Saint, Keepsakes, Catspaw, The Piper’s Song, Innocence Lost, Crewel Fate, and Heap of Trouble.

Cassidy Kincaide owns Trifles and Folly, an antique shop with a secret history. Cassidy can read the history of objects by touching them. She and her allies use magic and paranormal abilities to keep Charleston and the world safe from supernatural threats

Warning: This collection includes a Morgan Brice MM Paranormal Romance novella set in the Deadly Curiosities’ universe with scenes only appropriate for readers 18+.

Check Out the rest of the
Deadly Curiosities Series on Goodreads

“Come back inside, Cassidy,” he urged. “I don’t know why, but I don’t like the vibes I’m getting out here tonight.”

Teag’s intuition is fueled by strong magic, so I take his “vibes” seriously. I’m pretty good with both intuition and magic myself, and I felt a shiver go down my back. “There’s something out here,” I murmured, looking down the alley toward the streetlight at the end and seeing a dark shape in the roadway I had not noticed before.

“That’s what I’m trying to tell you,” Teag said. “Come back where it’s safe.”

Wardings protected the old antique shop against dark magic. Salt and iron lay beneath the sill of every door and window to repel evil, and as an added protection, sometimes we had a nearly six-hundred-year-old vampire staying in the secret room in the shop basement. Teag and I both wore protective amulets, and when it came to defending ourselves, we were no slouches. So when I lingered a moment longer, I took a calculated risk.

“We need to see what that is,” I said, jerking my head toward the lump that lay near the far end of the alley. I let my athame slide down beneath my sleeve into my hand and jangled the old dog collar on my left wrist, smiling as the ghost of a large dog appeared at my side. Teag muttered something under his breath and joined me a moment later, carrying a wooden martial arts staff and a wicked knife.

Together, we advanced on the shape, which lay still in the dim glow of the distant street light. A mangy cat paced near the body, staying just out of reach as we approached, even though Bo’s ghost growled and stepped toward it. If the cat could see Bo, the ghost dog didn’t intimidate him. I paid attention to what my senses were telling me, shivering at the resonance something evil left in its wake. Yet the closer we got to the thing in the road, the more certain I became that the threat itself had come and gone.

Join us over on Instagram for more of
Trifles & Folly 3!

You can also enter the giveaway on our Instagram post or click here for your chance to win an ecopy of your choice from Morgan or Gail’s backlist!

She is also the organizer of the #HoldOnToTheLight campaign.

Sign up for her Gail Z. Martin/Larry N. Martin newsletter here and check out her boards on Pinterest with photos that inspire her characters, books and locations, as well as Supernatural and abandoned places .

Find her Morgan Brice pen name in her Facebook Group.

Sign up for my Morgan Brice newsletter and never miss a new romance release.