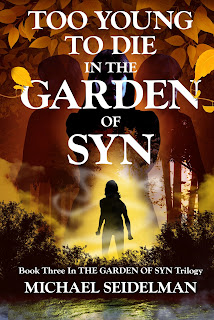 The stakes could not be higher in the epic conclusion of The Garden of Syn trilogy.

Synthia (Syn) Wade discovered a secret world known as the Garden, where illness and death do not exist. Because of the tragic events that occurred in the Garden, Syn vowed never to return, even as cystic fibrosis threatened her young life. But when Syn faces the ultimate betrayal and a malicious adversary closes in, she is forced to escape her world and reluctantly return to the Garden.

However, her ruthless foe is not easily thwarted. Flanked by a deadly army, this dark force manipulates its way into the Garden with the goal of ultimate destruction. Facing great adversity, Syn must risk her life to protect the Garden and all those living within its borders.

Will Syn save the Garden and those she holds dear from the storm cloud of evil? Or will she discover that no one is Too Young to Die in the Garden of Syn? 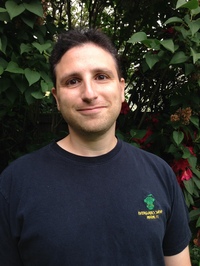 When Michael Seidelman was growing up, his passions were reading, watching movies, enjoying nature and creative writing. Not much has changed since then.

Working in Online Marketing for over ten years, Michael felt it was time to pursue his passion and began writing The Garden of Syn trilogy.

Michael is excited about the upcoming release of the third and final book in The Garden of Syn series and beyond the trilogy, he has more books in the works that he can’t wait to share with the world!

Michael was born in Vancouver, BC Canada where he continues to reside.

One Reply to “Spotlight: Too Young to Die in the Garden of Syn + Giveaway”