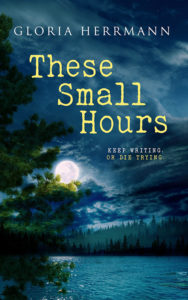 These Small Hours, by Gloria Herrmann

Charlene Vanderberg is a bestselling author whose world is turned upside as she experiences writer’s block for the first time. She now faces a deadline to redeem her career after her last book, a sappy romance, flopped. Charley had only wanted to try her hand at a different genre, one with a little less murder and mayhem, but had ended up creating some disgruntled fans. That’s when the words disappeared, and Charley found herself unable to write a single sentence.

After being plagued with crippling writer’s block for months and about to hang up the towel, Charley’s agent Pamela has convinced her that a change of scenery would help get her creative juices flowing again. She sends Charley off to a cozy lake resort and has enlisted some protection for her in the person of Nick Capra, a detective who is running from his own demons, has no desire to babysit the famous author but finds himself unable to stop developing feelings for his charge.

Famous for writing chilling tales, Charley isn’t prepared for the nightmare in store for her. The sleepy lake community where nothing bad ever happens begins to see a string of grisly murders. Charley discovers these murders were meant to inspire her to write her next novel. A copycat killer is reenacting scenes from her bestsellers. No one is safe from this killer—not even Charley.

Reader advisory: This book contains incidents of alcohol use, violence and murder.

“You can’t possibly be serious?”

“I am, and it will be good for you. I promise. You need to trust me on this.”

Charley—also known as Charlene Vanderberg, a bestselling author—was currently experiencing writer’s block for the first time. The words were there, locked somewhere in her mind and refusing to come out when she sat down every night to free them. Nothing. Just a blank page staring back at her, taunting Charley with the blinking cursor of where words should form. It had been months since Charley had written anything that hadn’t ended up on the wrong side of the delete button. At this rate, she feared there might never be words again.

Her agent was a force of nature and had the manipulative power of getting her way. That’s why Charley had agreed to sign on with Pamela Mansfield once her second manuscript had been complete. Charley had needed someone fierce to land her a book deal and steer her career in the right direction. Rejection letters didn’t help her fragile writer’s ego, and it was challenging enough to be recognized by any publisher without an agent. That’s why she needed one like Pamela. That woman knew her way around the publishing world and had seen something in Charley.

Her advice and encouragement had pushed Charley and ultimately launched her into the success she was now enjoying. Over the years, they had become good friends, almost like family. Charley had learned a great deal from this tiny woman who was set on building a brand and empire with the clients she represented. Pamela only worked with the best, most talented people in the industry, and Charley still couldn’t believe she was among them. She didn’t want to disappoint Pamela and worried that if those words didn’t start making an appearance soon, there would be some ugly consequences. They both had reputations to uphold.

Charley eyed Pamela curiously from across the table, half-hoping to break her agent’s resolve. It wasn’t going to happen, and they both knew that. The unwavering but tender stare as Pamela held her ground on what a great idea this was showed Charley that it truly was in her best interest.

“So, you honestly think by shipping me off to some lake resort in the middle of nowhere, I’ll really get this book done? That magically all of my creative juices will start to flow again because you’ve got me locked up in some hillbilly cabin?” Charley scoffed. “Sounds like all the makings of a Stephen King novel, and we both know how those go,” Charley teased as she poked her straw at a bobbing ice cube in her sweaty glass of water.

“Not just any cabin, Charley. My nephew owns the cutest little resort in Crescent Lake. The best part is that it’s only a few hours from here. Just imagine, all these quaint cabins around that gorgeous lake. Besides, you know very well that you give Stephen King a run for his money.” Pamela winked and turned her attention to the plate in front of her. “I thought nature was sort of your thing? Aren’t you some kind of country girl?” Pamela countered playfully as she stabbed her colorful salad of varied bright leaves and vegetables.

“It was. I mean, I like it well enough, but I’m hardly a country girl,” she answered with a touch of sophisticated sass.

“That’s right. You’re a famous writer now and living in your fabulous apartment with a perfect view of the Seattle skyline.” Pamela smirked with her fork to her lips. “Too good for the great outdoors?”

“What I meant was that I haven’t done anything remotely outdoorsy for years.”

“I just don’t see how it will help.” Charley shook her head and looked away. The restaurant with its elegant lighting and décor was filled with patrons all sipping wine and dining on extravagant dishes. Her writing had afforded her this lifestyle. Maybe I’m a little out of touch. The years of success and landing movie deals had pampered her with opportunities she’d never dreamed possible, especially for a girl who’d grown up on a rural farm town in the middle of Washington. She gazed back and saw a peculiar flicker in Pamela’s hazel eyes.

Pamela squirmed ever so slightly in her seat and bit her mauve-painted bottom lip. All the playfulness abandoned her face and was quickly replaced with something else. Charley studied her and tried to figure out exactly what it was. She could sense her agent’s nervous energy.

“They want that book before fall,” Pamela stated bluntly as she gently placed her fork down.

“And if they don’t get it by then?” Charley asked. Her belly began to do anxiety-induced flip-flops. So many what ifs ran through her mind that her sense of reason started to trip over them.

She clasped her hands together in prayer form. Pamela exhaled but kept her eyes locked on Charley. Through a forced smile, she calmly replied, “Let’s just focus on getting this book done.”

“Nothing like a little pressure to add to my already-growing problem.” Charley nibbled on a dry piece of skin on her bottom lip.

“You need a change of scenery and a little quiet inspiration then that ridiculous writer’s block will be gone. Every author goes through this at some point,” Pamela reassured Charley but nervously twirled a strand of her chestnut hair between her fingers. “I’ve had clients who’ve been down this road before.”

“I haven’t ever had this problem,” Charley confessed in a near whisper. “I’ve never had an issue with writing—like…ever, Pamela.” Charley’s heart beat a little faster with a sudden pang of anxiety. “The stories always kept coming, the characters made their demands well known and now poof, they’re gone. Writing is what I do—what I did.” As the words left her mouth, Charley realized the severity of her problem. If she didn’t pull it together and find a way to get her writing mojo back, Charley didn’t know what would become of her career. By the look on her agent’s face, it definitely wasn’t good. “Fine… I’ll go to your nephew’s little resort.” Charley defiantly speared the lemon wedge that rested on her perfectly cooked salmon. She no longer had an appetite as her brain developed images of her impending failure. She could lose it all—her swanky apartment, ridiculously expensive SUV and her famous name. It could all be gone.

Pamela smiled. “Don’t worry. We’ll get this book done and you’ll be back on top again. Everyone wins.” 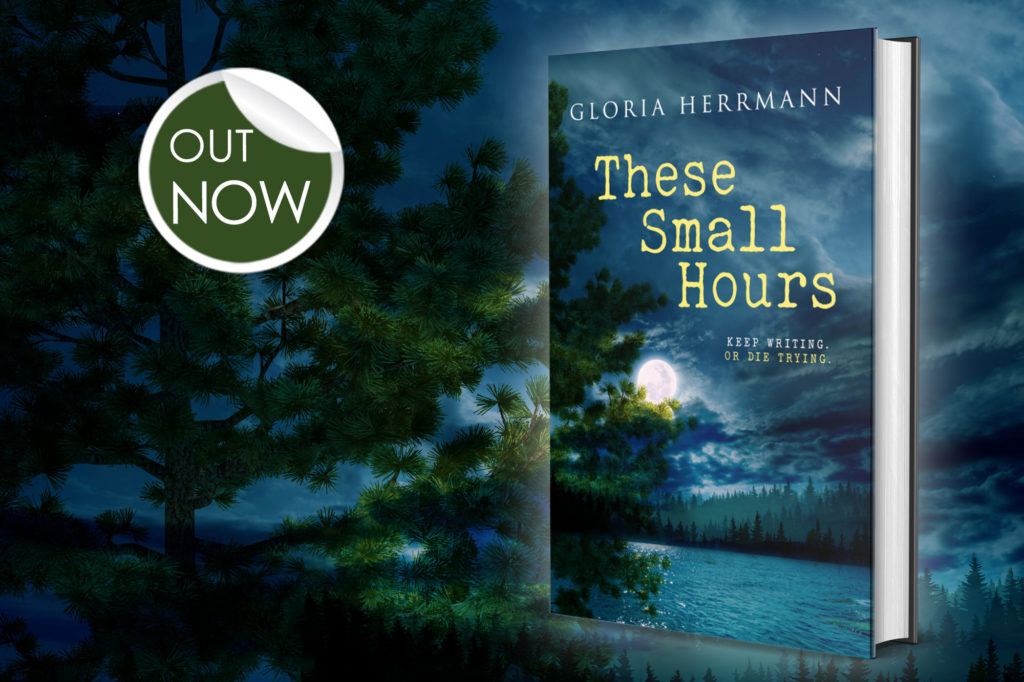 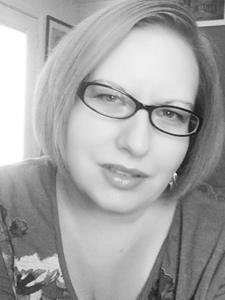 Gloria Herrmann is a contemporary romance author originally from California but now lives in the Pacific Northwest with her family and pug Rizzo. Her stories are a reflection of the love she has for family, friends, and real-life moments.

Enter to win a fabulous prize and get a FREE eBook from the author!

GLORIA HERRMANN IS GIVING AWAY THIS FABULOUS PRIZE TO ONE LUCKY WINNER. ENTER HERE FOR YOUR CHANCE TO WIN A LOVELY GIFT PACKAGE AND GET AND YOUR FREE GLORIA HERRMANN ROMANCE BOOK! Notice Notice: This competition ends on 3rd August 2021 at 5pm GMT. Competition hosted by Totally Entwined Group.

One Reply to “Book Blitz & Excerpt: These Small Hours + Giveaway”