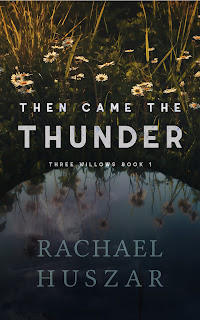 Jessalyn Joy loves her husband, but she can’t help the feelings that arose when he volunteered for the Union army. When he comes back to her in a box instead of on his feet, those feelings complicate even more.
Jessalyn’s mourning period is cut short when something begins to attack the livestock in their small town, and greater dangers begin to threaten their provincial life. Thrown together with the new reverend, one of her own students, and a strange man somehow related to her husband’s passing, Jessalyn must find a way to stop the evils that threaten her husband’s first and ultimately last home.
Set in the Southwestern home front, Huszar blends a taste of fantasy into a startling down-to-earth world, creating a high stakes adventure for this strong female protagonist and her band of amateur sleuths.

A throat-clearing sound brought Jessalyn’s attention back to the man who was looking at her with an expectant eyebrow raised. She’d been quiet for too long.

Samuel Brooks dipped his head like a gentleman and crossed the threshold into her home. He removed his hat and ran a hand through his slightly wavy light brown hair. Something about the way he moved bothered Jessalyn. He stepped smoothly, effortlessly, without any of the hesitation one would expect to read in a stranger entering uncharted territory. Yet he was already looking past her, at the space he had been assigned to live in, and he seemed comfortable. He filled it up, like water pouring from pitcher to glass, easily taking shape as if he was always meant to be there. Jessalyn felt her lips tighten. She straightened her spine, the way she commanded her students’ attention. He still had about two inches on her. Damn. Opportunities, Jessa. Opportunities.

“This is the house,” she said, gesturing to their surroundings. “You’ll take the spare room, just over here, beneath the stairs. You’re welcome to use any of the common spaces. You are responsible for your own meals and washing.” While she spoke, Samuel Brooks followed along, but was mostly looking at her. She fought back an urge to roll her  shoulders again. “Rent will be due on the first of the month. If you have any questions about the town, I will do my best to answer them. Regarding work, there are many ranches that are always looking for extra hands. I’d be happy to put in a word for you, if you like.” Jessalyn reached the end of the speech she had prepared for this morning.

Samuel Brooks took a moment, then said, “I’m sorry, this is overwhelming. I feel like this entire town is bending over backward to curry favor with a man they just met.”

From his demeanor of comfort, Jessalyn hadn’t expected this sort of a reaction at all. “We like to be hospitable here in Three Willows. Anyone who comes here ought to feel welcome. We’re glad to have you,” she said, echoing Ebenezer’s token greeting.

Samuel’s mouth turned up in a crooked grin. “You know, it’s gotta be the third or fourth time someone has said that to me. But coming from you, it doesn’t seem like there’s an ounce of truth in it.”

Jessalyn stiffened. She did not appreciate being analyzed. “Did you need my help at all with your bags, or…?” If Samuel Brooks was the sort of man who needed a clear boundary set, she was more than happy to do that.

Yet still, he grinned.

Jessalyn flinched. No one had ever shortened her name as a sign of endearment until she’d met Amos. She’d never been dear to anyone until she met Amos. Hearing that nickname come from another man’s mouth sent chills up her spine. She hated hearing it.

“I think ‘Mister Brooks’ and ‘Miss Joy’ will suit us for the time being,” she said coldly.

Was there nothing she could say that would wipe the smile off this man’s face? “It’s the name I’m most used to hearing. I’m ‘Miss Joy’ to my students.”

Samuel stuck a hand in his pocket and leaned back. “Right, right. The good mayor mentioned you were the schoolteacher.” He chuckled, shaking his head at the floor.

“I was just remembering my teacher. Missus Hughes. Old, crotchety woman, armed with a ruler at all times.” He set his pack down and nearly doubled over, shaking his fist in a pantomime of brandishing a ruler, then laughed again at his own impression. Straightening up, he said, “Maybe if I’d had something as nice to look at as you, I would have paid more attention in class.”

Jessalyn stared at the man in a mixture of shock, horror, and anger. Did he think at all about the words that left his mouth? Was he such a free spirit that he imagined he was liberated of all consequences? Perhaps his days in the desert burnt away his knowledge of manners. “Mister Brooks-“

“Mister Brooks!” Jessalyn was nearly shouting. Shouting at a stranger in the middle of her own house. Ridiculous. “Do you require anything else from me at the moment? If not, I’d like to resume my work.”

“I beg your pardon?”

“Why the sudden desire to take on boarders?” Samuel asked. “Are you so hard up for money in this paradise town of yours?”

“I don’t think that’s any of your business, Mister Brooks.”

Samuel spun in a slow circle, taking in the house again. “Young woman, whole house to herself? How am I to know I’m not being set up? Maybe I’m lodging with the Black Widow of Three Willows and tomorrow morning will find me with my throat cut and my pockets emptied.” He lifted his hands and wiggled them like spider legs.

“You’re doing me a service. There’s a difference. I am paying you, you know. You have to see how suspicious this looks.”

This man was a clown. A rude clown. Heat rose in Jessalyn’s chest as she listened to him. This wasn’t how this was supposed to go.

Samuel narrowed his eyes, the grin drifting to one side, sly. “You don’t trust me.”

“I do not know you, Mister Brooks.”

“Well, there’ll be plenty of time to remedy that.”

That was it. “I think not,” Jessalyn said in her strongest reprimanding tone. “Mister Brooks, I have acquiesced to providing a roof for your head, but this does not entitle you to a window into my personal life. We are not friends. We are not even familiar. Keep your distance.” With that, she flew up the stairs to her own room and slammed the door.

A low whistle echoed throughout the house.

Rachael Huszar kept her life steeped in stories from a young age, and she began her own journey in story-making when she reached adulthood. In the time since, she has taken up swimming, roller skating, and consuming tabletop RPG streams. She spends the bulk of her time with her dog, Silo, and works full time as a designer in Dallas, Texas.
Website
Instagram 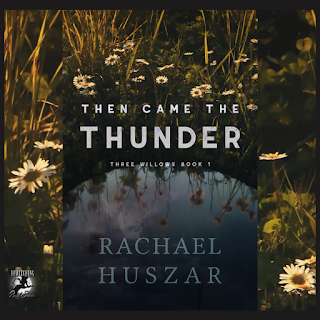 One Reply to “Spotlight & Excerpt: Then Came the Thunder, by Rachael Huszar”