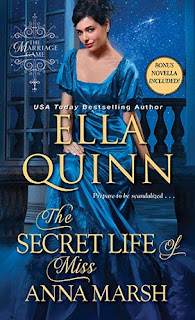 Now available in print for the first time, USA Today bestselling author Ella Quinn’s second installment in The Marriage Game series is a witty, romantic historical tale about a young lady who must choose between her head and her heart…

Since she was a young girl, Anna Marsh has dreamed of Sebastian, Baron Rutherford asking for her hand in marriage. But that was in another life when her brother Harry was alive, before she vowed to secretly continue the work he valiantly died for. Now as Sebastian finally courts Anna, she must thwart his advances. Were he to discover her secret, he would never deem her a suitable wife…

Sebastian has always known Anna would become his wife someday. He expects few obstacles, but when she dissuades him at every turn he soon realizes there is much more to this intriguing woman. Somehow he must prove to her that they are meant to be together. But first he must unravel the seductive mystery that is Miss Anna Marsh…

Anna had never before been so thankful for country hours. Rutherford had joined them for dinner and tea, and she was still in her room by nine o’clock. Lizzy helped her out of her evening gown and in to bed until she had to dress again. The few months before Christmas were always the busiest for her smugglers.

She woke two hours later, scrambled into her habit, and slipped down the back stairs through the side door to the stables.

Humphrey’s head was swathed in bandages. “Did the doctor remove it?

“Yes, miss, he took out two. Warned me not to wait so long the next time. Said there was a woman he saw that let it go so long she died of the infection. Right glad I am you made me see him, miss. I’ll be good enough tomorrow or the next day.”

“You need to rest. There is no reason at all for you to worry about me.”

Anna led Thunderer to the mounting block. Once on the large gelding’s back, she turned him toward the meadow and the sea. After changing at the cottage, Anna arrived at the cliff with time to spare. She descended to the beach to wait.

Kev was the first to arrive. “We’re going to be later than usual. Got word of a patrol.”

“One of our men was in a tavern in Dover. He heard talk.” Anna could just make out his grin. “They expect to be back in by midnight.”

That was a relief. Harry had given her a contact in the event they were ever caught, but she’d never had to use it and didn’t want to now. “Good. That won’t put us off by much.”

“I sent word to Lizzy that you’d be late.”

Anna nodded. “Have you received the information for the next few shipments?”

“Yes, Mr. Arnold.” Kev gave the dates for the next couple of weeks.

Once the men were assembled and the delivery signal given, Anna climbed back up the path.

About the Author: USA Today bestselling author Ella Quinn’s studies and other jobs have always been on the serious side. Reading historical romances, especially Regencies, was her escape. Eventually her love of historical novels led her to start writing them.