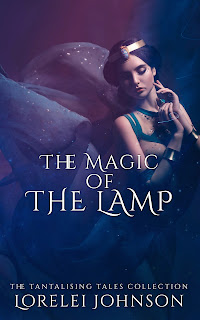 A headstrong princess, an ambitious sorcerer, and a forbidden love that could ruin them both…

A headstrong princess, an ambitious sorcerer, and a forbidden love that could ruin them both…

When Princess Jasmine returns home after fifteen years, she’s determined not to choose any of the suitors her father has lined up for her.

She doesn’t need a man to rule her kingdom.

Jafar has fought tooth and nail for everything he has and he never sets his sights on something he can’t have.

But the princess must marry a prince.

When the mysterious Prince Ali enters the palace stirring a curiosity in the princess, Jafar’s jealousy in uncontainable. But when the choice before him is love or power, will he fight for the woman he loves or cling to the power he so desperately craves?

The Magic of the Lamp is the enticing eighth book in the Tantalising Tales Collection. If you like forbidden romance, sizzling tension and happily ever afters, then you’ll love Lorelei Johnson’s seductive twist on this fairy tale.

Each book can be read as a standalone.

‘And here I thought you’d arranged all this for me,’ she said, pouting gently.

‘Shame on you, Baba, using this as an opportunity for political manoeuvring.’

The sultan laughed heartily. ‘Do you see how clever she is, Jafar? I dare say she would make any man a formidable wife.’

‘Indeed, your majesty,’ Jafar said. She suspected that was his usual response when he wished not to comment on a subject.

‘This is a party, and you are young. You should be dancing!’ the sultan exclaimed.

As if they’d been waiting for the sultan to make such an announcement, she saw men fidgeting in their seats, eagerly watching, waiting to pounce on her, to claim her first dance and perhaps her heart, though she knew they cared not for love, merely the throne and the power of the sultan. She was a bonus, like a brilliant golden bracelet to hang on their arm, ornamental and only for their own personal enjoyment.

‘If you wish to see me dance, Baba, then I shall,’ Jasmine announced, smiling warmly at her father even as she was cringing inside. But she need not play their little game, she would much rather play her own.

She rose from her seat and walked around her father’s chair, stopping in front of Jafar. He looked up at her with suspicion, not exactly the reaction she’d expected but it would suffice. ‘Will you not dance with me, Jafar?’

Jafar seemed lost, it was the first time she’d even seen him unsure of himself and she found it amusing, though she kept her amusement to herself as best she could. Jafar looked over at the sultan who waved him away happily, already starting on his next piece of lamb. She knew he wouldn’t dare refuse her, as it would be a great insult to the sultan if he did.

With barely concealed irritation, Jafar stood and took Jasmine’s hand, leading her to the dance floor as the whispers of those attending swirled around them. ‘Are you looking to start a scandal, Princess?’ he asked when they were out of earshot.

‘A scandal? Why, I’m merely dancing with an old friend,’ she said innocently.

He raised his eyebrow at her. ‘You didn’t take to the matrons’ teachings, then,’ he said, a statement, rather than a question as they traded positions on the floor, turning around each other but always remaining at a distance. This was Jasmine’s favourite dance, though she’d never told anyone.

‘How do you know what they taught me?’ she asked challenging him. The music moved her body, and her hips rolled tantalisingly as she slowly closed the distance between them.

‘You know your father did not intend for you to dance with me. There are many men here tonight he wants you to acquaint yourself with,’ Jafar said, changing the subject.

‘You haven’t changed at all, still as stiff as ever,’ she said, turning her back to him, rocking her hips as his hand slid around her waist, the heat of his touch slipping through the sheer fabric there, sending a thrill through her body.

‘And you as untameable as ever,’ he answered, his voice neutral. Nothing seemed to faze him. She found herself wanting to ruffle that perfectly still surface of his, elicit some reaction from him, some genuine emotion. ‘Why did you choose to dance with me?’

She spun around in his arms and he dipped her before spinning her and pulling her close again. He was merely following the steps of the dance, playing the role required of him. Something about that left a bitter taste in her mouth.
‘Because you’re the only man here who doesn’t want anything from me,’ she answered honestly.

‘Ah, so you wish to correct that, do you? You want all the men in the room to be in love with you?’ he asked darkly.

She glared up at him, then spun away. Rolling her hips sensually to the music, she held one arm out, curling her finger at him, a look of sheer confidence on her face. When he was once again close enough to speak to, she said, ‘You’re still an arse, I see.’

His eyes widened in surprise, not enough to notice unless you were looking for it.

‘I’m surprised that a princess would use such language,’ he said, tsking at her behaviour.

‘Are you? I thought you said I was untameable,’ she countered. He spun her a final time, pulling her against him as the music came to an end.

Lorelei Johnson is an Australian romance author, primarily writing Paranormal Romance and Fantasy Romance. She graduated from Flinders University, where she studied English Literature and Creative Writing before she discovered her degree was useless and she hated studying in an institution. She went into administrative work where she learnt just enough business sense to start publishing her own books.

Lorelei is fuelled by caffeine and sarcasm, priding herself as a true 90’s kid. She labels her self-publishing as an antiestablishment, but really she’s just a chicken who decided to avoid the gatekeepers altogether and enjoy the freedom to write whatever the heck she likes. Through her writing, she likes to explore the many facets of love and revel in a little magic and a little smut, of course. 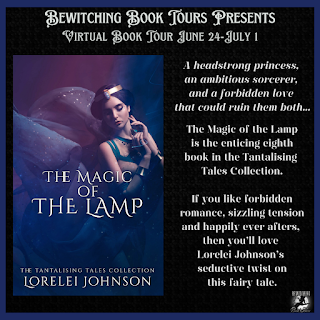 2 Replies to “Spotlight & Excerpt: The Magic of the Lamp + Giveaway”