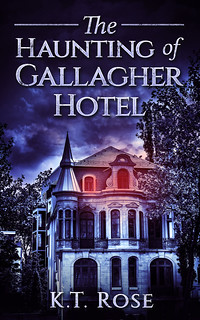 Pride and greed infect the soul, anchoring the dead to Gallagher Hotel.

When Chris, a master thief, and Riley, a contract waitress, get mysterious invites to an exclusive party at the haunted Gallagher Hotel, they discover that there is more at play than simple celebrations.

Hidden truths are revealed, and all hell breaks loose. But the “party” has just begun.

Now, Chris and Riley face their demons as they fight to survive a hellish nightmare full of spoiled secrets, carnage, and vengeful spirits lost to the hotel dating back to the turn of the 20th century.

Will they survive the night? Or will their souls be devoured by the most haunted building in Michigan?

You can find The Haunting of Gallagher Hotel on Goodreads

You can buy The Haunting of Gallagher Hotel here on Amazon

She glared around at the angry faces and recognized the men, women, and children of Holloway. She’d done more for them than any God before her. Many of those people owned the very businesses that lined the stone slab she marched across that night. Building and financing the rows of wooden businesses lining the town’s square accounted for half the things she’d done for Holloway. She fed the hungry, made clothes for cold children, and taught woman’s independence. The ever-growing list of the townspeople’s wants was endless. At one point, she didn’t mind the busy work. Fulfilling dreams of the once poor town kept her boisterous and distracted from her bitter reality. Trudy was Holloway’s personal shepherd, making the people her needy sheep.
Hands snagged at her lavender tea gown, adding dirty prints to the blood drops and grime from the beatings in that putrid cell. She glared at the bare-faced man towering over her. The brim of his Deputy hat cast a thick shadow, hiding his dark eyes and pale face.

Deputy would miss her. She was sure of it. He got off on the assaults that bruised her face. His heavy fists pounded her bones and scraped her skin until she confessed. And even her confession, he continued with his evening visits, slamming her body into cinder block walls and passing off open-handed blows to her nose, cheeks and eyes.

Trudy sighed. A bath with lavender and Epsom salt sounded good for the swelling. She didn’t realize how bloated and purple her once beautiful, smooth, fair skin had become until she passed by the picture window in front of the town’s jail just before they began her walk of shame.

Even then, her face pulsed with intense hurt. Pain shot through it whenever she winced.

The sea of convictions roared, growing louder as she drew closer to the opposite end of the square.

Their accusations sent a sickening jolt through her bones. She watched the path underneath her slowing feet, fighting back tears.

“Why’d you do it?” Trudy glared over her shoulder to find the small voice. Off to the right, a pale, round-faced girl sobbed. Arms across her belly, she grasped the sides of her smock dress: one of Trudy’s latest designs. She released it to Mary and Belle’s Boutique not even a month prior. “I looked up to you,” the girl shouted.

Trudy froze. The child would never understand. Holding the girl’s crying eyes in her own, Trudy thought, I did this for you.

She caught the faces of women shouting and screeching, advocating her death.

I did it for all of you.

“Eyes front!” Deputy said; his authoritative baritone struck Trudy in the gut. She frowned and did what she was told: eyes forward; just like the man demanded.  She watched her last stop approach in that ungrateful, dying town. After all the fighting, this is how it ends. She swallowed the ball in her throat, bowed her head, and pressed on.

With every step, she drew closer to the burnt building just beyond the angry mob. Charred and blackened, there it sat, blending with the night beyond the crowd’s orange flames. It moved her to tears to see her building reduced to rubble. The roof caved in, falling through the attic and second floor. The blast left the double-paned windows bare, with nothing to see inside but burnt walls and a black staircase. A crooked beam leaned over the arched door frame where the door held onto the bottom hinges as the top had burned away.
She scoffed. The people got creative, tying the noose to the end of the beam. Underneath it, a wooden crate.

“You people are about to make a serious mistake,” Trudy hissed.

“You should save your breath for your last words,” Deputy said. He led her to the crate. “Step up,” he said.

Legs shaking, she placed a bare foot on the crate and hauled herself up. The ground seemed miles below. Her head lightened and the jitters threatened to knock her onto the charred floor that used to be the honey waxed porch outside the front door.

Trudy turned and faced the prosecuting crowd. She grunted when a stone slammed into her forehead, pushing her off balance. She caught her footing and fought to stand straight as a heavy dizziness whipped around her head.
A cluster of women, including her sisters Belle and Mary, stood amongst the mob. Their faces, glossed in tears, glimmered in the flickering lights. They held her glance for what felt like hours, their eyes begging for an answer.

Trudy had an answer for what she did but didn’t see the need in telling them. It was already too late.

Slowly, they turned and pushed their way through the excited crowd, sauntering off in their fine silk lampshade tunics. Trudy remembered the day she’d bought those for them. She bought the boutique and the bakery for the girls, as well. Her heart raced as she cried. She expected backlash from the town, but never from Mary and Belle. As she watched her sisters leave her behind, Trudy went dead inside for the third and final time in her life.

Deputy pulled the loop over her head and tightened the knot, fastening it. Her throat shrank and butterflies circled her belly. Through heavy gasps, she said, “You know this town wouldn’t have grown without me.”

Deputy stepped back and faced the crowd. He pulled a note from his trouser pocket and opened it. Then, he reached into the breast pocket of his deputy button up and pulled his reading glasses free. He placed them on his face and looked over the note.

“You—you people wanted to bring money into this town,” Trudy yelled. “I caught the train over to Detroit and made connections that brought the money here! You people wanted Mayor Tucker out of office. I made him disappear! I paid the price to make Holloway the train-stop town that it is today! I made it Saloon Alley! While you people collected money from tourists and travelers, I was out there making deals that made us rich!”

“Hang the killer,” a woman yelled.

Deputy cleared his throat and raised a hand. The crowd fell silent.

“Trudy Mona Lisa Gallagher, you have been charged with the following crimes against the town of Holloway, Michigan: destruction of property, conspiracy to commit murder, murder, and arson. You have been formally convicted by the people of Holloway and I, Sheriff Deputy Davidson Lee Hill. You were not allowed a trial as Judge Benjamin Rowles, District Attorney Allen Clyde Albright, and Sheriff Peter Kyle Louis have all perished on this very spot along with Michigan’s Governor Brighton James Fisher, Mayor Richard Tucker, Mrs. Louise Fisher, Mrs. Patricia Tucker, Mrs. Madeleine Albright, and Mrs. Freda Albany Louis.”

The mob gasped and fell into hushed chatter.

“Also, amongst the dead are nineteen souls including the hotel’s waitstaff, maids, pianist, and bartender. I am sad to say that this will haunt Holloway forever.

“Our investigation concluded that you planted homemade explosives and barred those poor souls inside. You are sentenced to death by hanging on the grounds where your explosions claimed innocent lives. All that stand witness, aside from the townspeople of Holloway, are your two sisters, Mary Karen Welch and Belle Leanora Roth. Your husband, Ulysses Gallagher, God rest his soul, must flip and twist in his grave. He died in the muds of enemy territory for all of us. How you can defy him with your heinous behavior is beyond me.” He moved his eyes from his note and onto the mob. “Trudy Gallagher has lain with politicians and bootleggers alike to push her own sinister agenda. She poisoned the streets of Holloway with hooch, prostitutes, thieves, and brawlers. She is an illness to this town and needs to be extinguished before she harms anyone else.”

He turned to Trudy. “You are a disgrace, and, in my opinion, hanging isn’t enough of a punishment. I wanted the firing squad to take you down.” He flexed his neck and huffed. “However, after days of deliberation by the people of Holloway, this is the conclusion to your life of manipulation, greed, and murder.

“Reverend Pillars wanted to say a prayer for you, but the people would rather not waste any more time. But they will grant you your last words, an attempt at getting an explanation, perhaps. What say you?”

Tears fell down her face. The taunting and accusations made her chest swell. She inhaled deep and pushed a weak breath through her shaking lips. She understood the risks associated with her lifestyle. Keeping up with deals and tracking lies day in and day out was enough to drive anyone mad. But the rewards and freedom that came along with those risks changed her for the better. Trudy became the most powerful woman in Holloway. The reward was well deserved, and in the name of Ulysses, she’d claim the crown even after death.

“Did you hear me?” Deputy asked.

The people groaned and gasped.

Deputy cleared his throat. “Murder is funny to you?”

She sighed and shook her head. “No.” She looked him in the eye. “But I’ve begged no one for anything before, and I won’t start now. Those people deserved what they got and if I had another chance, I’d do it again. No one stands in my way. Not you, not these people, and not the bastards who blew up.” She scoffed. “In fact, if I had the chance, I’d do the same to all you ungrateful imbeciles.” She glared at the faces of her persecutors. Faces that trusted her before. Faces she strived to keep happy. Faces that could burn in hell alongside the others. “I always win, and when you all go to sleep tonight, I want my words to sit deep in your conscience. I don’t beg.” She narrowed her eyes. “I take,” she growled.

Deputy nodded, disdain across his face. It tickled Trudy’s heart to see him disappointed. He might take her life, but he’d never hear her apologize. He didn’t deserve it, and neither did they.

Cheers filled the square as Deputy kicked the crate, sweeping it from underneath her.

Her body dropped and the sound of snapping bones erupted in her ears. 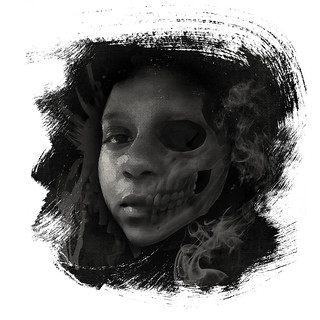 Giveaway
There is a tour wide giveaway for the blog tour of The Haunting of Gallagher Hotel. Three winners will each win a t-shirt, 2 bookmarks, and a $10 Amazon gift card. 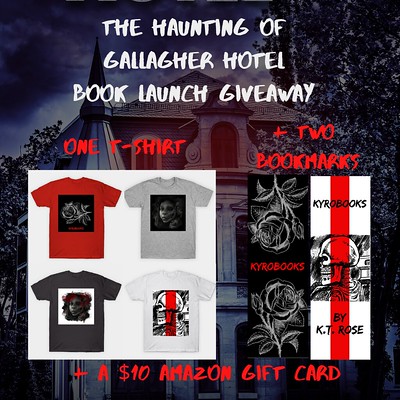 This blog tour is organized by Lola’s Blog Tours. The blog tour runs from 1 till 15 December. See the tour schedule here.

2 Replies to “Spotlight & Excerpt: The Haunting of Gallagher Hotel + Giveaway”