I am thrilled to be hosting a spot on the THE FALL OF TITAN by H.G. Ahedi Blog Tour hosted by Rockstar Book Tours. Check out my post and make sure to enter the giveaway! 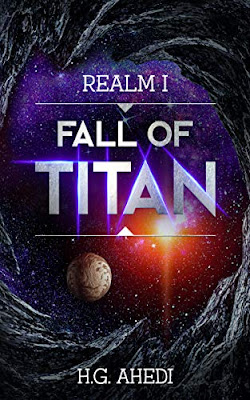 Title: THE FALL OF TITAN (Realm 1)

In the twenty-fourth century, a sophisticated security system called the perimeter guards the outer rim of the solar system. Governed by Titan, a powerful space station, the perimeter is almost impenetrable. Emmeline Augury, an astrophysics cadet on Titan, believes in a family folklore about a mythical device with unlimited power. Recognizing its scientific and military value, she uses unorthodox methods to follow a trail of cleverly concealed clues. Her search uncovers an ancient plaque, which reveals a star map of a secret network of portals leading to the device, the key that opens the doors to the seven realms. Suddenly, the key to absolute power is in her grasp, and everyone wants a piece of it, especially the power-hungry Orias queen. What began as a scientific adventure turns into a dangerous manhunt when an Orias fleet attacks Titan. The queen threatens to slaughter everyone unless she is given the device. When the fate of Titan and the seven realms hangs in the balance, Emmeline must make a choice. Will she save her home or the device? 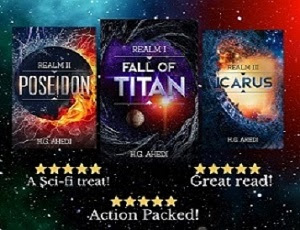 Get all the books in the Realm Series now!

SATURN
The silence in space was always uncomfortable for Argon Keston. But today, he didn’t know if it was the silence or the reason he was out here. For the third time, he checked the
environmental controls. The temperature was normal, but he still felt cold. He rubbed his hands together and surveyed the beautiful view on the screen. He admired the massive rings. It was an extraordinary sight, and yet he knew that within seconds of opening the airlock, deadly gases would kill him.
Atlas was one of many squadron ships. The semicircular spacecraft was ten feet wide and fifteen feet long. Her weapons were located at the edges. The pilot’s cockpit was in the elongated section, which emerged from the middle. Three other fighter ships just like her hid in the vast outer rings of Saturn. Behind them was a sea of millions made up of millions of rocks and asteroids of all sizes. Monitoring. Waiting.
Argon was a young, slender man who was quiet and gentle with kind green eyes and thick brown hair. He was amiable and innocent looking and preferred to keep a well-trimmed beard, which made him look a bit more mature.
Today, for the first time, he wore the uniform of the Imperial Command: a black half-sleeve t-shirt with navy-blue trousers and a high-neck maroon jacket. All his life he wanted to command his ship and fly into the unknown, but today he was getting first-hand
experiences of the dangers of space. Wearing this uniform, he actually felt the burden of being a fighter, a leader, someone responsible.
Argon moved back and forth, waiting for the signal. It had been six hours. Too much time had passed.
It had all begun two months ago on just another day on Titan. Lieutenant Adrian Olson and his team had been conducting a routine survey of the perimeter. Unexpectedly, they’d detected an unusual energy signature, and there it was: an unidentified spacecraft.
Adrian had hailed the ship immediately. But the alien ship had been beyond communication range and had disappeared within minutes. Two weeks had passed, and the unknown visitor had reappeared with two of its friends, this time closer to the perimeter.
Their arrival had sent a wave of excitement through the citizens of Titan. They’d tried to contact the three ships, welcoming them to their home. But the outsiders had remained silent. The ships had drifted close to the perimeter and began scanning. Alarms had gone off, and Titan’s patrol ships had been dispatched. The alien ships had quickly disappeared but had left a sense of restlessness in their wake.
Argon wanted to believe they were explorers, but he did not. These aliens frightened him. He felt as if the cockpit of Atlas turned colder. He recalled the meeting on Earth with the Imperial Command. Some believed invasion was inevitable, while others sought more diplomatic methods.
He wondered about their choices. Did they have any? Could today be the beginning of an interstellar war that would change their lives forever? Would they survive? Would he see his family again? No one he knew had experience with war. For generations that had lived in peace, interstellar war was a frightening concept. But leaving Titan or any other colonies undefended was not an option.
Since their first appearance, the crew of Titan had kept looking for signs of the aliens, and the Imperial Fleet remained on standby. Days passed, and things began to settle down. Everyone thought they would never come back. Argon wished it too, but his wish was not granted. Twelve hours ago, Adrian had detected the unusual energy signature again. Like it or not, it had begun.
Admiral Jacob Donavan was in charge of the fleet, and his priority was to take a diplomatic approach. He wanted to communicate with the aliens. Argon’s squadron was a backup if things went south. Argon wasn’t sure the admiral’s plan was going to work. In fact, no one knew if anything was going to work. They had limited ships, resources, and fighters. The admiral had full confidence in the fleet. But Argon didn’t think he was qualified for this mission.
Argon had just finished training as a pilot, and before he could think about his future, these aliens had appeared, and he’d been appointed as the squadron leader. He was surprised; he thought Byron Thames, his best friend, would have been a better choice. But the decision wasn’t his to make.
A large asteroid drifted in front of his viewscreen. As if they were a family, three small asteroids followed the larger one. The cloud of dust particles surrounding the ship dispersed momentarily, and Argon saw the perimeter. A vast security system built by his ancestors to protect Earth and other colonies like Titan. At this distance, it looked like a glowing chain of stars.
He looked to his left and saw a small yet powerful ship belonging to Byron Thames. Not too far away from Byron’s ship was another craft. It appeared almost like a ghost, flooded in the gases of the planet’s rings. Argon knew Micah Dew was out there, waiting. He was surprised he had remained silent for so long. To his right was the fourth ship. Its pilot, Clio Ranger, was a patient, quiet, intelligent young girl.
Argon’s eyes drifted toward the panels. Adrian hadn’t contacted them. Maybe it was a good sign. But he knew they were out there. Suddenly, the silence was broken. “They’re here. Be ready. The fleet is approaching the gates,” a voice crackled on the radio. Straightening up in his chair, Argon was about to power up the engines, but he stopped. The admiral had told them to power down their ships. He thought this would help them remain undetected. Personally, Argon thought the aliens wouldn’t care. He thought they were here for something, searching for something. Their scans bothered him. One day, he would have his answers, but today, he would settle for defending his home. 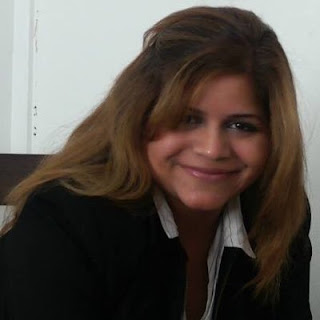 I am H.G. Ahedi, writer of the award winning science fiction series Realm. I dabble a bit with crime fiction too. I am the owner of the most vacant apartment in Sydney (it has minimum furniture and more books). My plants do not survive (I have buried four) and if you buy me a good cup of coffee – we are friends forever!

My dream is to find a way into the fictional world, and write about it in real world. I would love to have a cup of tea with Agatha Christie and solve a case with Sherlock Holmes. And of course pick their brains for my books. I spend my weekends with box of popcorn and TV series (mostly sci fi and mysteries). My real life is a bit more sensible or rather boring. I have done a PhD (I don’t know what I was thinking) and right now I spend my day handling a database.

So what have I written?

Stella is free book is available on my website : https://harbeerahedi.com

Do I do social media? A little bit…

One Reply to “Book Blitz & Excerpt: The Fall of Titan + Giveaway”