This blog tour is organized by Lola’s Blog Tours. The blog tour runs from 6 till 19 April. See the tour schedule here. 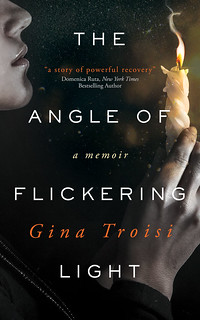 Blurb:
Gina Troisi’s father moved out when she was five years old, but before he left, he insisted on telling her about his various affairs—with prostitutes, with her mother’s friends, and finally, with his secretary, Brenda, whom he had decided to marry.

By the time she reached adolescence, on a search for respite from her father’s verbal abuse and Brenda’s psychological torment, Gina spent hours doing Jane Fonda’s workouts, smoked cigarettes instead of eating food, became obsessed with her thinness, and with the notion of fading away. She began to find solace in restlessness—drinking hallucinogenic mushroom tea and inhaling crushed pills and powders—perching herself on the periphery of danger again and again.

As an adult, when she finally glimpsed a better life for herself, her grandfather, who had been a surrogate father to her, became terminally ill, and she fell in love with John, a stranger who was utterly familiar, but who was addicted to heroin. She moved from New Hampshire to California, crossing the country in an attempt to alleviate her selfdestructive tendencies, but found herself pulled back to New Hampshire, to John, a man with whom, despite his struggle, she could not deny the sense of home she felt. But what would it cost for a girl to run wildly and recklessly into womanhood, making instant, temporary homes? And would she ever find home within herself?

At five years old, I sat “Indian style” on the foot
of my father’s bed, alone in his new condo. I’d
gathered his ballpoint pens from the desk in the
corner, and began assessing the pictures of women
adorning the pens; they wore spiked high heels
and bright-colored leotards and bikinis, and blue,
sequined triangular tops that reminded me of my
older sisters’ dance recital costumes. Their miniature
figures pronounced behind sparkles and strings,
their bodies splayed into decorative shapes. I tipped
them upside down, and their sparse garments fell
off—they were proportioned women, with hardened
pink nipples and clumps of dark hair between their
legs. I clothed and unclothed them with the flick of
my wrist, turned them upside down, then right side
up again. They were grown up, like my mother, whom
my father had just left. I was mesmerized by these
ladies, by their full, buoyant breasts, by the inner
curves of thighs that made a hollowed out space for
their private parts to breathe. I lay down, watching
their clothes fall piece by piece, nestling myself into
the cushion of the king-sized bed.

The ladies made me think not only of my mother,
but also of the faceless women my father rambled
on about while out to eat at our favorite Italian
restaurant. My sisters and I sat silent, letting him
reiterate that Brenda, his secretary who’d quickly
become his girlfriend, had nothing to do with my
parents’ impending divorce, that he’d been cheating
on my mother for years, with all kinds of women,
including prostitutes.

“Your mother just didn’t want to admit it. She kept
her head in the sand. Remember her friend, Marla?”
Marla had lived with us for a while when she needed
a place to stay in between moves. “I slept with her,
too—we had an affair for two years while your mother
and I were together. Ask her.”

When we arrived home from dinner crying, we
gathered in my oldest sister’s room. My mother came
in to find us sitting on the bed. “What happened?”
she asked.

Krista was twelve, so she did most of the talking.
“He said he’s been cheating on you for years, that you
knew. That every time he went on a business trip, it
was never for business.”

While my mother listened, I kneeled behind Krista,
and began to pop the cysts on her back. I worked
around the straps of her tank top, performing a job I
always volunteered for, since she couldn’t reach. My
sisters talked fast, repeated my father’s words, the
gestures he’d made, how he acted as if we must have
known about his mistresses all along. I concentrated
on squeezing, on trying to find the pointed heads
on the bumps of her skin. “Harder,” she usually
said. “Until all the pus comes out. Until they start
bleeding.” But today, she didn’t tell me what to do,
just waited for my mother’s response. 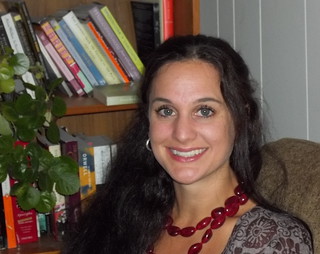 About the Author:
Gina Troisi’s work has appeared in numerous literary journals and anthologies, including Fourth Genre, The Gettysburg Review, Fugue, Under the Sun, Flyway: Journal of Writing and Environment, and elsewhere. Her stories and essays have been recognized as finalists in several national contests, including the 2020 Iron Horse Literary Review Trifecta Award in Fiction, the 2018 New Letters Publication Award in Fiction, American Literary Review’s Creative Nonfiction Contest, 2018, and others. She has taught numerous classes and workshops in both traditional and nontraditional settings, including writing workshops for female adult survivors of sexual assault. She lives in coastal Maine. 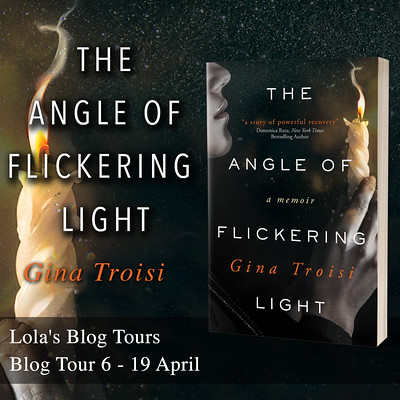 Giveaway
There is a tour wide giveaway for the blog tour of The Angle of Flickering Light. US Only. These are the prizes you can win:

The prize package includes a bookmark, mini journals with a photo of the cover, and wine glass charms.

2 Replies to “Spotlight & Excerpt: The Angle of Flickering Light + Giveaway”