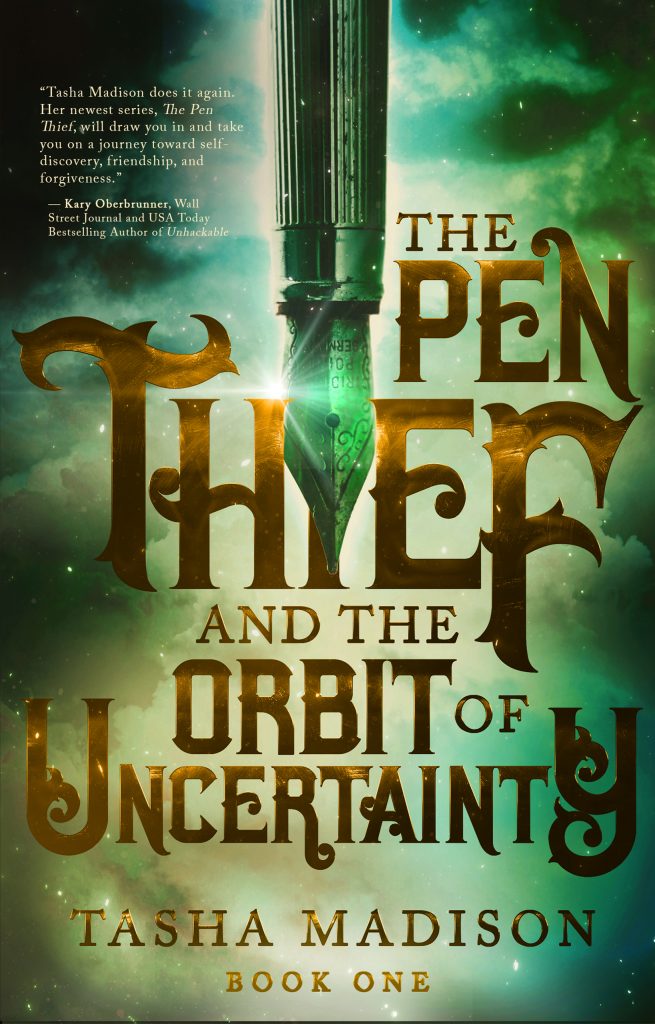 How do you pen your own destiny when you’re destined to control a magical pen?

Arnie Schmidt is an unremarkable seventeen-year-old nerd who works at his uncle’s accounting firm. Nothing exciting happens to him. Ever. The most exhilarating experience he had was sharing an elevator with his office crush once. It was a pleasure never to be repeated!

When his high school bully gets a job in the mail room and starts to make moves on Arnie’s dream girl, Arnie thinks his dull existence is over. However, a chance encounter at a yard sale changes his boring life forever.

An endless array of peculiar circumstances emerge, transforming Arnie’s average existence into one more extraordinary. One moment, he’s planning the epitaph on his tombstone, the next he’s trying to keep a vintage relic from sending him to an early grave and upsetting the entire balance of the universe.

What’s a timid number cruncher to do? Can Arnie protect his newfound treasure before it’s lost or stolen? Only time—and the unparalleled power of an enchanted fountain pen—will tell!

Tasha is a book nerd, editing ninja, and design geek. She has degrees in journalism, business, and law. She is the award-winning author of Fabric of a Generation and Pharaoh’s Shadow.

After spending most of her childhood reading in the dark, after hours with a flashlight, she now prefers to curl up in a comfy chair at her local coffee shop.

She covets a seaside cottage full of antique typewriters, where she can write young adult magical realism books, historical fiction, and take on editing gigs to pay for her fountain pen addiction. She sometimes also obsesses over modern Jane Austen renditions and what it would be like to meet Shakespeare. To learn more about her, visit TashaMadison.com. 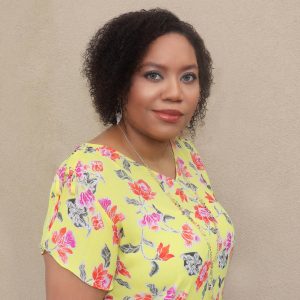 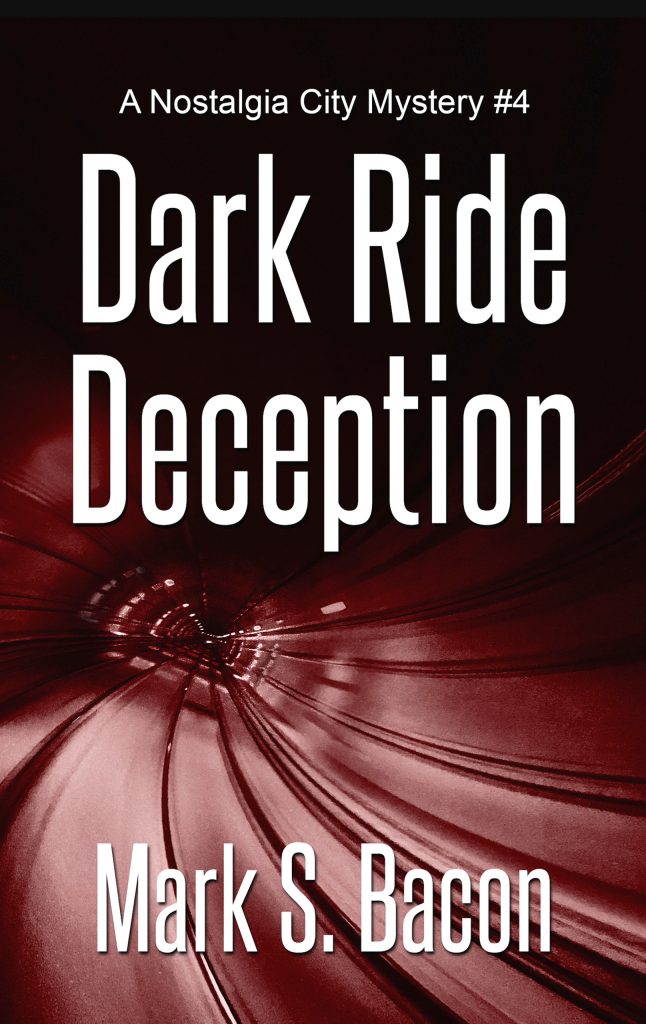 The entire $22 billion US theme park industry is about to be eclipsed by breathtaking new technology. The Perception Deception Effect will rocket Arizona’s Nostalgia City theme park decades ahead of the competition—and possibly alter the way we view what is real and what isn’t. But the secret technology is missing. And so is its scientist creator. Is he dead? On the run?

An FBI agent theorizes the People’s Republic of China is responsible for the disappearance. The Nostalgia City CEO, however, is convinced a rival theme park is behind the theft. He drafts ex-cop turned theme park cab driver Lyle Deming to fly to Florida to find the missing computer scientist and recover his secrets.

Does this have anything to do with the severed human finger Lyle finds in his cab?

Back at Nostalgia City, a sprawling re-creation of an entire small town from the 1970s, a movie company is shooting a Vietnam era crime story. It’s a welcome distraction from the tech theft until the film company announces its last-minute replacement star is Cory “Psycho” Sievers, fresh out of rehab and aching to exact revenge on Hollywood. When another actor is found dead, park executive Kate Sorensen, a 6’ 2 ½” former college basketball star, is persuaded to investigate.

Shrugging off jet lag, Florida humidity and chronic anxiety Lyle goes undercover using a parade of false identities—from attorney to maintenance worker—to snoop behind the scenes at other theme parks. Although he’s generally tech savvy, he’s flummoxed by Perception Deception science. He gets help from a Nostalgia City engineer who speaks the jargon, but Lyle must rein in his assistant’s enthusiasm for corporate espionage.

In the meantime, Kate confronts the mentally unstable actor. But she may be forced to give up the murder case—Lyle’s in trouble.

Kate and Lyle have little time to explore their relationship as both their investigations turn deadly, threatening them and the future of Nostalgia City.

**Even though this is the fourth book in the series, it can be read as a stand-a-lone**

Lyle talked to himself as he headed to the park’s transport center. The evening’s sideshow of passengers crowded out
his brain’s frequent worry cycle. For that he was thankful. After a few minutes, he pulled into the taxicab wash facility.

Tomás, the friendly young guy who washed the cabs, opened the taxi’s back door and looked inside. “One of your
fares puke, huh?”

“It’s pretty foul. A woman was sick.” Lyle got out and set his hat on the front seat. He pushed his wavy brown hair
off his forehead and grabbed a plastic dustpan from a nearby rack. He opened the cab’s left rear door. In the enclosed carport, Lyle’s taxi smelled like a frat house bathroom after a freshman party. He scooped at some of the vomit with the dustpan but had to back out as his gag reflex threatened to kick in. Sensitivity had been one of his liabilities in his former profession.

“I’ll clean it out with this,” said the attendant, now wearing a mask and wielding the wand of a wet-dry vac. Standing at the back door, he shoved the nozzle under the front seat and worked toward the rear. The noise of the muck being slurped up sounded little different from when it was deposited. After a moment, Tomás leaned back out of the car.

Lyle glanced inside the car. On the floor, amid a slurry of bile and partially digested food, he saw a human finger.

Writing theme park mysteries was inspired by actually working at a theme park!

Early in my career I worked for Knott’s Berry Farm, the theme park just down the freeway from Disneyland.  Although I spent most of my time in an office writing ads and commercials, I occasionally worked in the park for special events. I got a behind-the-scenes view of a theme park during the day and at night.  From that time on, I thought a theme park would be a great locale for a murder mystery.

So I invented Nostalgia City theme park as the setting for my mystery novels.

I spent many hours researching criminal cases involving corporate espionage and talking to corporate security experts. Criminal activity impacts companies and corporations in many ways. I learned much about what companies do to protect their facilities and their industry secrets. In Dark Ride Deception I include some of the secrets of protecting secrets.

Writing a 83,000-word novel requires days, weeks, months of virtual isolation staring at a computer screen and pounding the keys.  It calls for research, editing and concentration.  This is what I’ve done for all my mysteries, but this time the isolation was compounded by a pandemic quarantine and creating Dark Ride Deception, got me through it.

A dark ride is theme park jargon for an indoor attraction, like Disney’s Pirates of the Caribbean. A dark ride can be in a boat, car, train or other transportation.

My story involves a software engineer who creates the ultimate dark ride technology called the Perception Deception Effect.  It’s so advanced it could alter people’s sense of what is real and what isn’t.  But before the mind-bending tech could be developed into a ride, it’s stolen. And the engineer disappears, too.

I have two protagonists.  Kate is a combination of two people, one is my younger daughter who was a basketball star in college.  The other is someone I used to work with and from whom I learned a lot about dealing with people.  Lyle, the other main character, has a little bit of me and a little of several other characters in real life and fiction. Only my daughter knows she’s part of the book.

Many of the renown detectives of fiction, Marlowe, Spade, Archer, Holmes and others had a moral code. My ex-cop detective, Lyle Deming, has a code, a way of determining right from wrong, and you see it at work here and there. The book, however, is not about teaching readers lessons. It’s more about sorting through clues and following Lyle and Kate through their adventures.

Since several of the characters are continuing ones from the series, I’d say the most challenging new person for this book was movie star Cory Sievers.  His background is a mixture of Hollywood success and, lets say, disappointments. His fame means he’s recognized by everyone who sees him and that might not be an advantage.

I’m planning the next Nostalgia City mystery which will include a little noir-ish style. In the meantime, I’m working on crime short stories.

Mark S. Bacon began his career as a Southern California newspaper police reporter, one of his crime stories becoming key evidence in a murder case that spanned decades.

After working for two newspapers, Bacon moved to advertising and marketing.  He wrote nonfiction business books including Do-It-Yourself Direct Marketing, printed in four languages and three editions and named best business book of the year by the Library Journal.  His articles have appeared in the Washington Post, Cleveland Plain Dealer, San Antonio Express News, Orange County Register, Denver Post, and many other publications.  Most recently he was a correspondent for the San Francisco Chronicle.

He earned an MA in mass media from UNLV and a BA in journalism from Fresno State.  He gets many of his ideas when he’s walking his dog. 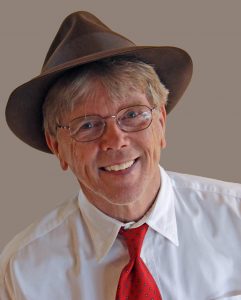