I’m obsessed with the game.

I spend so many hours playing that I dream about dangerous missions on other worlds…and my gorgeous, in-game training partner, Kassius. That is, until I win. I beat the Starfighter Training Academy.

But is it a game? Or alien software designed to recruit new, unsuspecting soldiers for a war in another star system? Because when my hot as heck alien shows up at my workplace demanding I leave Earth and travel to the Vega system? What? When he informs me it’s my duty to fight Queen Raya and the Dark Fleet? Claims he wants me as much as I’ve craved him? Let’s just say things get crazy.

Facing the truth is never easy, but when I arrive at the Elite Starfighter base I learn that Kassius cheated the system, hacked into the game, and lied to everyone on two worlds to make me his.

I wiped my hands down my black pants, my palms suddenly damp. The elevator ride to the first floor felt like an eternity as I made my way to the public meeting room I’d instructed this Kassius Remeas be escorted to. My high heels clicked rhythmically against the hard floor and I straightened my suit jacket, buttoned up the two large black buttons as if I were putting on armor. I arrived to stare at the closed door, hand shaking as I lifted my knuckles to knock.

Before I could knock again, the door opened, smacking against the wall and bouncing back a few inches. I jumped, startled. Then I stared. And stared. There, standing before me, was a really good likeness of Kass. Someone had gone all out. This guy had the same dark hair. The same crooked smile. The same small scar under his left eye. The same dark brown eyes. The same damn dimples that made him look like a mischief making, super-sexy space pirate.

He was dressed head to toe in black, the cut and tailoring exactly matched the in-game uniforms of a Starfighter MCS, but he had no adornments or anything else that indicated he was in the military. Any military. And fool that I was, my gaze darted to his chest to look for the Starfighter insignia. Which was there. Black on black, but the damn swirl was there. I even recognized the buckles on his boots.

What the hell? This space alien uniform was absurd. Laughable, which meant I was the brunt of the joke now for the half second my heart leapt and my body tightened as if he was real. Two heartbeats later the stupid organ ached ten times more than it had before as the leap of joy crashed back into the pit of despair. Because this man absolutely was Kassius Remeas, in the flesh.

So, was this man a model? Maybe the game developer had placed him in front of a green screen and based the avatar of Kassius Remeas on this man. Maybe I was hallucinating and a pimply-faced teen with a half-grown mustache and gangly legs was staring back at me. Perhaps the stress of the job had finally sent my mental health into a tailspin.

But I couldn’t tear my eyes off him. Fuck that, I couldn’t blink. Or breathe.

“Mia Becker.” He didn’t say more but inspected me with the same intense scrutiny I gave him.

I wasn’t going to call him Kass. It would hurt too much. Uttering that one syllable meant that I was buying into the entire joke. And I felt that it was all on me.

Without tearing his eyes away, he pulled me into the room and pushed the door shut behind me. He even reached around me to turn the lock. The sounds of the reception desk, security checkpoints and scattered voices dropped away, making us very much alone. The room was sealed and searched every morning for surveillance equipment. The walls were thick and there were no windows. We were truly alone.

I still didn’t speak and he narrowed his eyes. Then he closed the distance between us, gently placed his hands on each side of my head and kissed me.

For a second I froze because a paid actor, or model–a complete stranger–was kissing me. With soft lips. With a need I felt seep through his fingers, his mouth. Every inch of him radiated with need. For me. 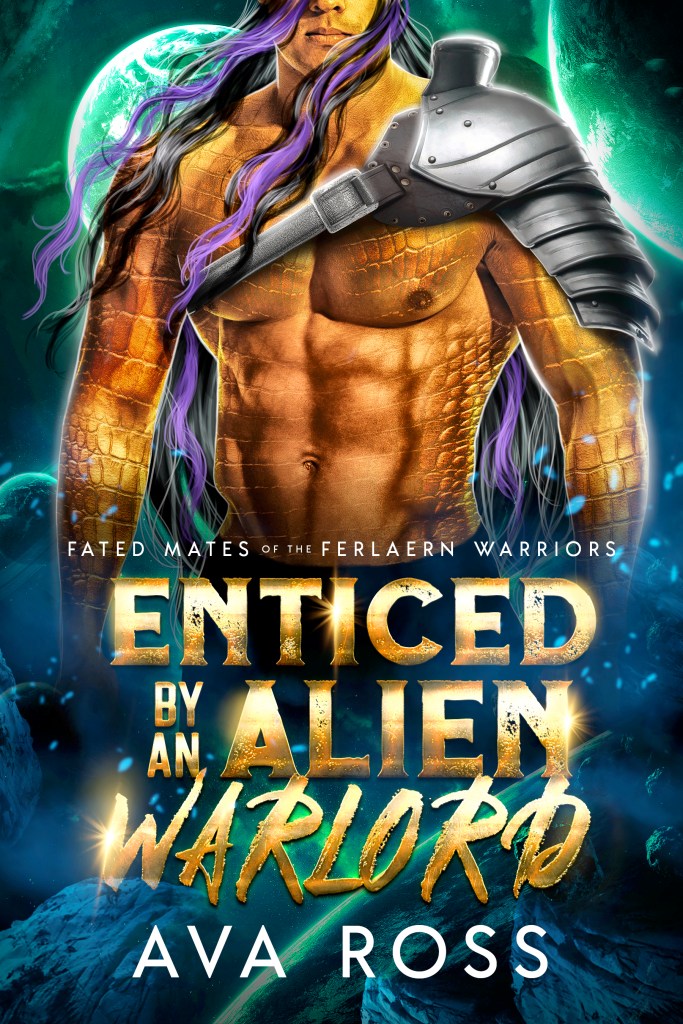 Enticed By an Alien Warlord
by Ava Ross

He has tusks and a tail and insists she’s his fated mate. She’s enticed, but determined not to get involved. Can a burly alien warrior and a single mom find love together on a planet far from Earth?

Garek: With my clan threatened, I don’t have time for romance with a pesky Earth female. Until I meet Piper. She and her youngling son are part of our planet’s new settlement. Soon, I find myself helping her plan her home and talking about odd Earthling activities. What is a square dance, and must I do it? She’s soft and lush in all the right places, and I could pick her up and carry her around with one arm. And her son… I ache to show him how to tame a mighty winged trundier. Piper may say she doesn’t need love, but I’ll do whatever it takes to win her heart.

Piper: I brought my eight-year-old son to Ferlaern to start anew–the new wild west, we’re calling this planet. The other women want romance but not me. Then I meet Garek, a seven-foot-tall, gruff warrior who’s out to steal my heart. Burned in the past, I’m afraid to trust. Never mind that he makes my son laugh for the first time in forever or that his kisses… Not going there. But when our settlement’s attacked by vicious creatures, it’ll take both of us to survive the threat.

ENTICED BY AN ALIEN WARLORD, the first novel in the Fated Mates of the Ferlaern Warriors series by bestselling alien romance author Ava Ross. Each book in this series is a standalone, full-length story which has on-the-page heat, aliens who look and act alien, a guaranteed happily ever after, no cheating, and no cliffhanger. Starfighter Training Academy. It was just a game. The newest, hottest video game release of the year. Choose a role. Build the perfect hero who joins you on missions to save the Vega star system from the evil Queen Raya and her merciless Dark Fleet.

Play for hours? Check.
Obsess over the in-game romance between your avatar and the sexiest alien you’ve ever seen? Check.
Win? Beat the heck out of the game? Check and check.

Open your door at 3:00 in the morning to find that smoking hot alien you thought you made up in your head standing there? Um… okay.

Wake up on the other side of the galaxy with that same alien insisting you’re his… and that you haven’t been playing a video game, but completed the training program to become the first Starfighter from Earth?

Was someone at my door?

I rolled over and blinked at my alarm clock. Three freaking thirty in the morning?

I must have been dreaming.

“Coming!” Was my apartment building on fire? Was it the police? Had the neighbors been screaming at each other again? She really needed to kick that deadbeat boyfriend of hers to the curb.

The pounding intensified, and it was obvious that whoever was on the other side of the door had no problem waking up the entire building.

“I said, I’m coming!” I opened the door and stopped dead in my tracks. A huge man stood in the hallway wearing a helmet of some kind, as if he’d been riding a motorcycle. Which was crazy because it was cold and wet and not motorcycle weather.

He removed the helmet, and I stepped back. My eyes widened in recognition. Black hair, those familiar sparkling green eyes. Perfect olive skin. Full lips. Square jaw. A familiar uniform with a crest on his chest, the one I’d just seen on my gaming screen.

I stared, my throat and mouth frozen. Holy shit. That voice. I knew that voice.

He was as big as I’d imagined. No, bigger. Broader. More intense. That gaze, it bored into me, past my flannel pj’s and to a place that left me speechless. My heart pounded, and I feared I was losing my mind. Hallucinating. This had to be a dream.

“Jamie Miller, you must come with me.”

“You are the first Starfighter. And you are mine. Queen Raya has mobilized the Dark Fleet, and together we must save Velerion.”