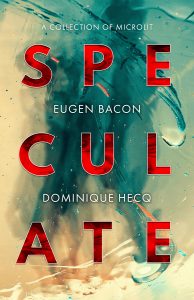 SPECULATE: A COLLECTION OF MICROLIT
by Eugen Bacon & Dominique Hecq

From what began as a dialog between two adventurous writers curious about the shape-shifter called a prose poem comes a stunning collection that is a disruption of language—a provocation. Speculate is a hybrid of speculative poetry and flash fiction, thrumming in a pulse of jouissance and intensity that chases the impossible.

ABOUT THE AUTHORS:
Eugen Bacon is African Australian, a computer scientist mentally re-engineered into creative writing. She’s the author of Claiming T-Mo (Meerkat Press) and Writing Speculative Fiction (Macmillan). Her work has won, been shortlisted, longlisted or commended in national and international awards, including the Bridport Prize, Copyright Agency Prize, Australian Shadows Awards, Ditmar Awards and Nommo Award for Speculative Fiction by Africans.

Dominique Hecq grew up in the French-speaking part of Belgium. She now lives in Melbourne. Her works include a novel, three collections of stories and ten books of poetry. Hecq’s poems and stories have been widely published in anthologies and journals. Often experimental, her work explores love, loss, exile and the possibilities of language. Kaosmos and Tracks (2020) are her latest books. Among other awards such as the Melbourne Fringe Festival Award, the Woorilla Prize for fiction, the Martha Richardson Medal for Poetry, and the New England Poetry Prize, Hecq is a recipient of the 2018 International Best Poets Prize.

Friends are not important—like plagues, they come and go, even blood is not thicker. But fate is another matter. Some fool in autumn had a drink in the dark, sought a taste of heaven in a street named Bagh Nakh. Found it in the hands of a runaway who raised a hand and plunged a dagger that clung to the idiot’s heart.

You were born in autumn and so, naturally, hate spring. The scent of blackwood showering pollen. The air licked with gold where the buzzing of the bees deepens. The sudden opacity of it all. You run. Run away. Away from the visible and from the invisible. With the pollen clinging to your skin, the sun striking and the darkness beneath your feet settling, you are a living phobia. A fear of no consequence. Yet as eons pass in one beat of the heart, you hear the rustle under the trees. Taste the bite of death.

She steals at dawn

to a place of memory, a beloved place she can enter her stories. The way her fingers pad on the keyboard. The rush that sweeps through her body arrives her at an intersection where mind and fingertip are one. She needs practice sleeping in a little, her lover’s breath heartfelt on her earlobe. But she runs when she can, to a play-filled memory enriched with mannequins she can chase, surreal encounters on red rock bicycles, oh, how she soars.

She feels adrift, like an autumn moth flapping its dusty wings until it rests on your windowpane on the far side of the world. Says there is no rhyme nor reason nor even any explanation for being. Sky pied, almost as perfect as the horse she used to ride. As for turbulence, the sky is cloudless; the writing not exactly cloudy, but cloud-gathering. Now it’s raining streams of light on red rock bicycles.

Let it play out

She wonders at the misjudgment of facts, the hybrid of the unknowing and the uncanny. Looking at the artist and his painting of the death mask, there is notable difference between a brief and a summons. In, out, who commissioned the sketch and to what detail of artwork? Out, in, beyond interrogating the plastic cast disunited from the corpse, how to discern confidence in an artist’s perception? The plan is to keep silent, let it canvas out. Or perhaps to issue a bordering statement that is a responsible thing, or to conclude it’s an illustration that is simply a hoax.

It is a hoax. All art is. We deceive ourselves, sometimes all the better to tell the truth, but deep down we fabulate, fabricate, counterfeit—lie about our deepest desires. As should be. I’ve just picked figs from the tree and painted them, knowing full well it’s plagiarism in the history of art. Now I’m going to stew them, French style: Flambé Figs. Peel them carefully (12 of them). Put them in a heavy-based frying pan. Add 3 tablespoons of curaçao and the same amount of brandy. Sauté them over low heat until the figs take on the color of the painting. Prick them gently. Set them alight and shake the pan until your flame dies. Serve them warm with whipped cream. Sprinkle them with hoax dream powder. Enjoy!

She returns home each day, ten hours in the office. She steps through the door, man, he’s got the look. It’s like Here doggy!, tail going wag, waiting for a ball. Just the gleam in his eyes . . . Work’s so hard, bitches everywhere, she says. Let me love you until you feel right, he croons. He steals candles, makes her promises. Pricks her fingers, sucks her blood. It’s a balance of costs, risks and benefits.

Returning to Australia after four weeks in Europe is a shock. It’s not just that everything looks rougher, brighter, wilder, harsher in the morning light. No. Scary dreams overflow the days. I ride a Harley on the Monash Highway. Climb Mount Kosciuszko. Build space shuttles complete with orbiter, external tanks and solid-rocket boosters. Repair cassette tape recorders and telephones with curly handset cords. I steal candle snuffers, make wax candles and tallow tapers that are supposed to be dripless. But are not. I knock down burners, tip over charred candle wicks, snuff, snot. Prick my fingers on the candlestick’s pricket. Dream of devotionals, the obliteration of the word phobia, and coins on my eyes.

Today’s word is jazz. You can hear her nimble feet gyrating in your head to no effed-up beat. She leaps and twirls to a place of memory, but it is full of compost and she regrets nothing. The motionless CCTV monitor captures her arms and feet as they pirouette in and out of the gaze’s focus. The world keeps turning. Frolicking grounds full of water gardens connect the nerves that travel through the body, as balloons with eyes go sway, sway to the pitapat, rat-a-tat, pitter-patter pat . . . The sound is a love offering. She only wants to conquer herself in a trail of plummeting sand and too much poetry burning into a bard’s cross-genre lyrics jousting with thought.

Rain burning the idea of love. The moon weathers the heart in haloes that tell of life unlived as though it knows desires given up for dead. It spooks me as I put the rubbish out, all the while focusing on promises we know we can’t keep. Look! The moon exfoliates its light skin. Turns blue, blood, black. And now you will ask yourself why the chambers of your heart are patched, not lined, as if some invisible hand had undertaken to paint the pain over before it could be ciphered, named, encrypted. And you do ask yourself as you throw artichoke leaves into the compost, and run inside to the sound of jazz.

Neither a kitchen nor a sky

Her heart is a room full of photographs and pillows wafting around rehearsing melancholy and reinstating torment. But there is still no word, just somber silence in the floating photographs and neglected pillows cartwheeling like burnt toast past the IKEA blender and microwave in a fairy tale of space that does not involve breathing.

His heart smells of burnt toast. If you look closely, you will see a paisley design—the sort found as all-over design for an IKEA bedspread. The main motif and the background of ferns are done with pure (that is unmixed) colors: just red (turkey) and black (jet) to conjure up the marriage of blood and vegemite, the staples of his diet, as well as his sign in the Chinese horoscope. Yes: he is a tiger. Enter the chambers of his heart at your peril. Don’t say you were not warned. He grinds his teeth.

Her heart is a free tram zone, pedestrian crossings, traffic lights, wheelchair access, all hand-drawn. It’s a labeled platform full of ads by a twaddle of writers saying glance at this, glance at that, and oh look! Free Wi-Fi. DO NOT OBSTRUCT. It’s the yellow and black caution for passengers about a station upgrade, valid tickets, feet on seats, offensive language and taking rubbish with you. If there were words, she would follow the golden line at the platform, speak to it as the train pulled in. She would ask why she’s not experiencing metamorphosis, just optical illusions about power operating doors gliding open and then shut, the train now departing. As she moves up the escalator past the cop shop with its blue and white squares all dirty as bootlegs, no help at a glance, she finds the subway, and then a great big owl fully concrete in the landscape, directing its gaze at the flat crowns of metropolis high-rises that defy or define the city. Like an authorized officer she knows that she must adopt a role that makes sure anyone with access to her toppled heart, delicate but still beating, pays their way. She walks past a teen sat cross-legged on the pavement with a ring on her lip and holding up a sign that says homeless, hungry and three months pregnant, but she keeps walking lest her heart staggers and stops.

Hey, you! You could be me. Life does go upanddown upanddown upanddown. This is why I dust the streets in your city, uncrease your creeks, polish your floors and occasionally collect your dog’s droppings. I know there’ll be spilled wine, broken glass, words curling from the fire in your mouth. A shudder. A pause. A da capo. I know that all too well. I peer through your window, and the pane reflects my shape making for the open road where our shoulders retain the weight of expectancy. Don’t underestimate the virtues of polishing, especially in the Loire Valley where vineyards are doing well in the global village. There I looked after body armor adorned with intricate inlays. I preserved plumes and strengthened holders. I wiped visors, scrubbed chin pieces and gorgets. Straightened cuirasses. I polished breastplates and lance guards and backplates and codpieces and gauntlets and fan plates. And much more, my dear, as the word fan intimates. My nickname was chain mail, then chain fume. Try shackling me now.