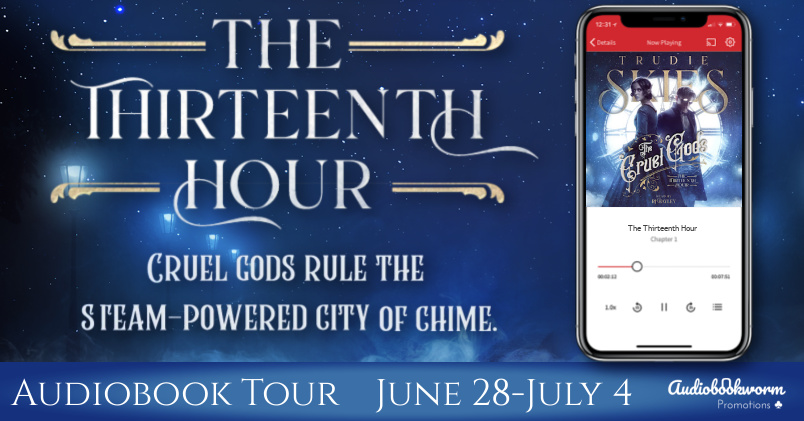 WHEN THE SAINTS FAIL, THE SINNERS STEP UP.

Cruel gods rule the steam-powered city of Chime, demanding worship and tribute from their mortal subjects. Kayl lost her faith in them long ago, and now seeks to protect vulnerable and downtrodden mortals from their gods’ whims. But when Kayl discovers powers that she didn’t know she had—and destroys a mortal’s soul by accident—she becomes Chime’s most wanted.

Quen’s job was to pursue sinners, until the visions started. Haunted by foreboding images of his beloved city’s destruction, Quen hunts soul-sucking creatures made of aether who prey on its citizens—and Kayl is his number one target.

To ensure Chime’s future, Kayl and Quen must discover the truth of Kayl’s divine abilities before the gods take matters into their own hands.

For a city that bows to cruel gods, it’ll take godless heathens to save it.

The Thirteenth Hour is the first book in The Cruel Gods series—a gaslamp fantasy featuring magical portals, gothic cosmic deities, quaint Britishisms, and steampunk vibes. This is an adult book containing strong language and mature themes that some listeners may find disturbing. For a full list of content warnings, visit Trudie Skies’s website.

Trudie Skies has been living inside fantasy worlds ever since she discovered that reality doesn’t quite live up to the hype. Through the magic of books, she wishes to share these worlds of hope and heroes with other weary souls. Living in North East England, Trudie spends most of her free time daydreaming about clouds, devouring whatever fantasy books or video games she can get her hands on, and chasing after her troublesome dogs, who would like to reassure you they are very good boys.

Her debut YA fantasy series, Sand Dancer, was published through Uproar Books. Trudie is now writing adult gaslamp fantasy with her new series, The Cruel Gods.

An accomplished full-time voice actor and audiobook narrator with 4 years of experience.

RJ’s voice has been described by peers as a ‘well-weighted baritone, balanced & deep at the same time.’

Natually he’s got a mild Yorkshire lilt that’s trustworthy and relatable. He’s extremely adaptable however and capable of many convincing accents, or anything you throw at him really.

So far he’s narrated over 30 audiobooks with more currently in production. As a VO he’s been the voice of brands such as Nickelodeon, Johnson and Johnson, Network Rail, Aegon, Accord and more.

He maintains he’s not trying to ruin his own career by deafening himself with heavy metal on his dog walks. To survive incredible odds, one teen may have to trust both his former enemies and his fire-forged destiny….

Neil Vapros is one of the last free warriors of the great city of Altryon. He and his brother’s only chance of staying alive involves trusting an uneasy alliance with their former enemies. But in the world beyond his city’s walls, Neil’s life is much more dangerous than he ever imagined possible….

The Emperor has hired a ruthless madman and a vicious pack of assassins to hunt down the last supernatural survivors. As the allies attempt to hide from their enemies, the leader of a rebellion singles out Neil as the answer to a prophecy. Neil isn’t sure he believes he’s been “chosen”, but he knows one thing for sure: their only chance for survival lies in sticking together. While treachery and pain wait around every corner, Neil and his allies may win the day, but victory without casualties could prove impossible….

The Flames is the second book in the award-winning Epic Feud trilogy of young adult fantasy novels. If you like rich fantasy settings, imaginative supernatural abilities, and tough-as-nails characters, then you’ll love Kyle Prue’s electrifying adventure.

Buy The Flames to fire up the action today!